/ Articles / Getting Around Riyadh: A New Transit System Takes Shape

Getting Around Riyadh: A New Transit System Takes Shape 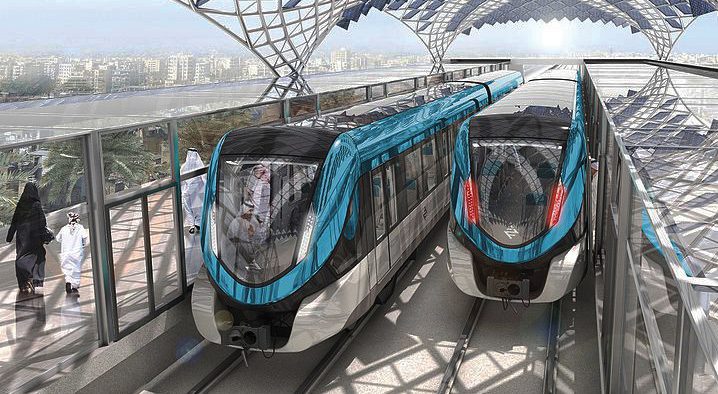 A new metro line in Riyadh, Saudi Arabia, will span 109 miles and include 85 stations and six rail lines. (Métro_de_Riyad_©_Avant_Première)

The 100-mile-plus metro line will help ease congestion in the fast-growing capital of Saudi Arabia.

Beginning in 2021, traveling in the city of Riyadh will never be the same. A new rapid transit system spanning 176 kilometers (109 miles) will help ease traffic congestion in the capital of Saudi Arabia. The $22.5 billion project will include 85 stations and six lines, and it’s just the second metro system in the entire country.

Fahd Al-Rasheed, CEO of the Royal Commission for Riyadh, said the Riyadh Metro project will be an important component of the city’s development strategy. “The sky is the limit for our ambition in Riyadh, and we anticipate doubling the city’s population as well doubling the size of the economy with the implementation of more than 18 giant projects,” he said in remarks reported by the Saudi Gazette newspaper.

Construction began in 2014, and the metro is part of the Riyadh Public Transport Project (RPTP). A bus system and other transport services are part of the project.

The metro system, however, is the centerpiece of the massive infrastructure job. The system is expected to accommodate 1.16 million passengers when it begins operation, increasing to 3.6 million passengers after 10 years. The metro will travel close to high-traffic attractions, such as universities, schools, hospitals, employment centers and commercial buildings.

Officials expect the metro will reduce the number of car trips by nearly 250,000 trips per day and save 400,000 liters of fuel per day. The project includes an advanced control and operation center to manage and control the movement of the trains as well as monitor stations, tracks, facilities and systems.

Currently, commuters take approximately 10 million trips per day in Riyadh, but 80 percent are by car and only 2 percent are by public transport. Besides the metro line, the bus network will extend across 1,900 kilometers with about 3,000 stops. 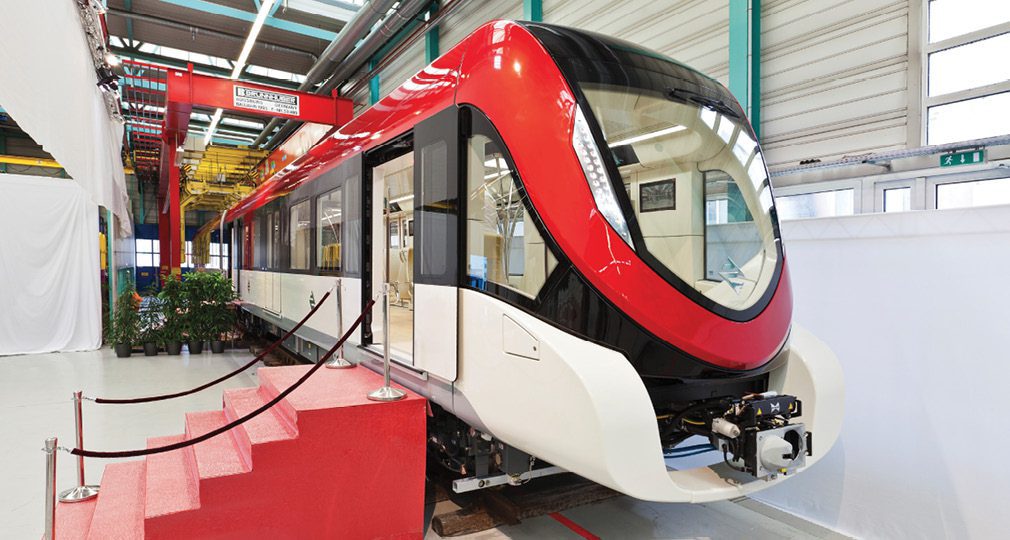 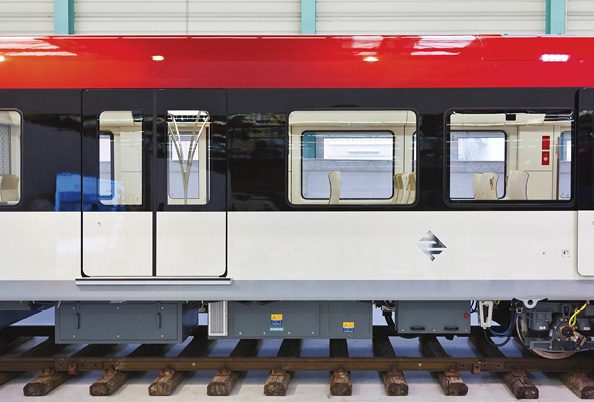 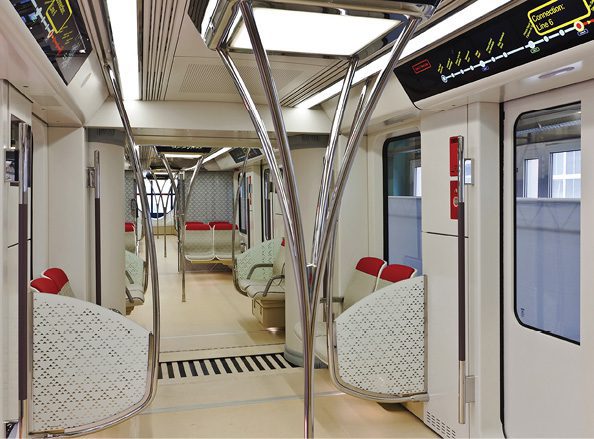 The trains, most of which were designed by Siemens, are fully automated and equipped with safety systems such as obstruction sensors and a fire-detection system.

There are six color-coded lines on the metro, with the longest being the 40.7-kilometer (25.3-mile) orange line. There are 20 stations along the line as well as two interchange stations.

The red line stretches across 25.3 kilometers (15.7 miles), and the 12.9-kilometer (8-mile) green line runs underground. The purple line extends across 29.9 kilometers (18.6 miles), is mostly elevated and connects to the city’s financial district.

The stations and interchanges are monitored by cameras, early warning systems and communication systems. Many of the stations have shops and restaurants. They also are equipped with solar cells that contribute to generating 20 percent of the station’s electrical needs.

There are three major stations: the Olaya Metro Station, Downtown Metro Station and King Abdullah Financial District Metro Station. The Olaya station includes public gardens that extend over the entire area of the station, a designated picnic area, palm trees, and accessibility to all levels with stairs, lifts and escalators. Arriyadah Development Authority (ADA) invested nearly $20 million in the design of the Olaya station, which has a gross floor area of 68.85 square meters and a gross volume of 387 cubic meters.

The stations all along the lines have common themes:

• Architecturally appropriate for the region

According to Gerber Architekten, the Olaya station architect, “The new oasis becomes a communicative meeting place of the city. The sculptural form creates a park which gradually rises upwards in gentle waves to become the roof of the Metro Station. This dune park will answer the pressing need for more green space in Riyadh.”

One of the more expansive stations was designed by Zaha Hadid Architects in the King Abdullah Financial District. The main element of the station is a 3D webbed-steel skeleton that weighs 2,785 metric tons on the interior and 4,237 metric tons on the exterior. All predicted rail, car and pedestrian traffic have been mapped and structured to optimize internal circulation and avoid congestion.

Bechtel’s responsibilities focused on Lines 1 and 2 in a nearly $10 billion contract. Bechtel also delivered train cars, signaling, electrification and integration of the lines to the metro network. BACS is building 40 percent of the stations and 36 percent of the rail lines in Riyadh. 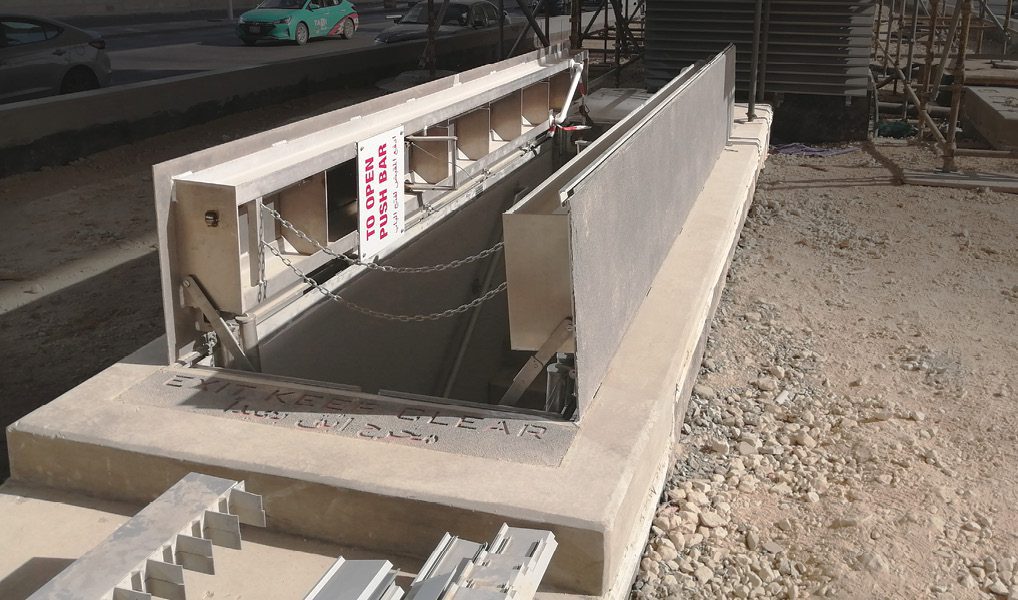 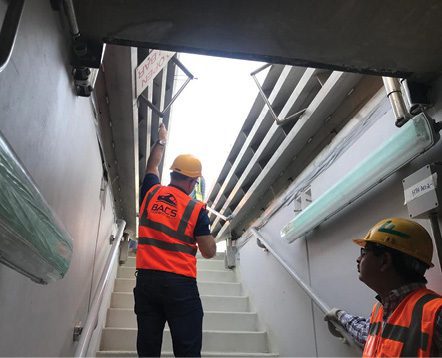 BILCO made 73 floor doors for the $22.5 billion project designed to help alleviate congestion in the fast-growing capital of Saudi Arabia.(Courtesy of BILCO)

Riders on the Riyadh lines will enjoy traveling in state-of-the-art trains, most of which were designed by Siemens.

The driverless trains include 41 four-car sets for Line 1 and 26 two-car sets for Line 2. According to Siemens, the trains are fully automated and include an integrated automation system. The trains also are equipped with safety systems such as obstruction sensors and a fire-detection system. Auxiliary driver control desks at both ends of the train enable manual operation in emergency cases and in the depot. They also include touchscreen displays.

The four-car trains are capable of carrying up to 522 passengers, while the two-car models carry up to 251 passengers. The trains meet NFPA 130 / EN 45545 fire-protection requirements and are designed with low maintenance costs, optimized energy consumption and high recyclability at the end of their service life.

The project includes a United States connection from BILCO, which manufactured 73 floor doors installed at stations along the line. The order was one of the largest in the 94-year-old history of the specialty access manufacturer. BILCO secured the order from BACS with support from SchlegelGiesse of Dubai, a sister company of BILCO in the Tyman PLC portfolio of businesses.

The BILCO doors provide access to equipment stored underground or below/between building floors. They also are used for emergency egress from underground platforms.

Improved transportation infrastructure is needed in many large cities, but especially so in Riyadh. The city’s population has exploded in the last 50 years, and it’s one of the fastest-growing cities in the world.

In 1970, the population in Riyadh numbered approximately 408,000, according to statistics from the United Nations. That is about the current size of Tulsa, Okla. Now more than 7 million people live in the city, and it’s ranked 52nd in the world in population size. Its population is only about 1 million residents less than New York City and should surpass it within the next decade.

Saudi Arabia is in a transformative stage. There are numerous goals, with one of the major ones being to reduce the nation’s dependence on oil and diversify its economy. It also wants to develop public-service sectors such as infrastructure, health, education, recreation and tourism.

The new rail line is a major infrastructure piece toward realizing that growth. Fahd Al-Rasheed said in an interview with Reuters in 2020 that the government and private sector plan to spend approximately $800 billion during the next decade to transform the city. “Riyadh is already the epicenter of economic development in the country and the region,” he said. “We now have the ambitious plan under Vision 2030 for doubling both our economy and population over the next 10 years.”

Thomas Renner writes on building, construction and other trade-industry topics for publications throughout the United States; email: [email protected]