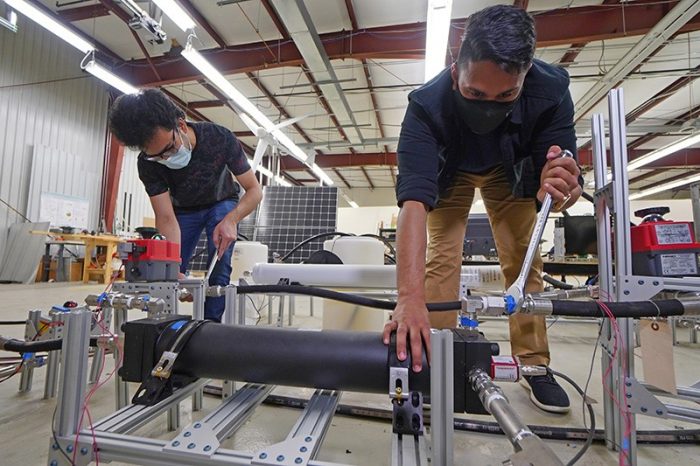 WEST LAFAYETTE, Ind. — Making fresh water out of seawater usually requires huge amounts of energy. The most widespread process for desalination is called reverse osmosis, which works by flowing seawater over a membrane at high pressure to remove the minerals.

Now, Purdue University engineers have developed a variant of the process called “batch reverse osmosis,” which promises better energy efficiency, longer-lasting equipment and the ability to process water of much higher salinity. It could end up a difference-maker in water security around the world.

Reverse osmosis is used in many countries; in arid places like the Middle East, more than half of the fresh drinking water supplies come from desalination facilities. But to maintain the high level of pressure required for the process – up to 70 times atmospheric pressure – a desalination plant must employ large numbers of pumps and other equipment. And that uses a lot of energy.

“About a third of the lifetime cost of a desalination plant is energy,” said David Warsinger, a Purdue assistant professor of mechanical engineering. “Even small improvements to the process – a few percentage points of difference – can save hundreds of millions of dollars and help to keep CO2 out of the atmosphere.”

During his doctoral work at MIT, Warsinger first developed the idea of “batch reverse osmosis.” Rather than keeping a constant flow of seawater at those high pressure levels, a batch process takes in a set quantity of water at one time; processes it; discharges it; and then repeats the process with the next batch.

“Each batch runs for about one to two minutes,” Warsinger said. “We ramp up the pressure over time, reduce the volume over time, and we end up using much less energy to produce the same amount of fresh water.”

Though some desalination plants have attempted to use semibatch techniques, none has ever implemented a full batch system – partly because of the time breaks between batches.

“It takes time and energy to pump each batch of water out, and then pump the next batch of water in for processing,” Warsinger said. “Expending that time and energy generally cancels out the efficiency gains you would get from using the batch process. That’s why we developed a solution called ‘double-acting batch reverse osmosis.’”

“Instead of fully emptying the piston each time or using some other liquid or gas to pressurize the piston, we’re filling it with the next batch of seawater,” Warsinger said. “So rather than one side of the piston being essentially dead space, we are using the seawater itself to get double-duty out of this piston, so there’s almost no downtime.

“According to our models, this proposed system offers the lowest energy consumption ever for seawater desalination. It’s a best-in-class milestone.”

Their research has been published in Desalination.

“Downtime is really something you want to avoid,” said Sandra Cordoba, a Purdue master’s student in mechanical engineering and first author of the paper. “If you have to service the system after every cycle, you lose all your energy efficiency. Reducing or eliminating that downtime is the key thing that makes batch reverse osmosis feasible.”

“Reverse osmosis is a complex process,” Cordoba said. “To gauge its success, you have to track many variables: water pressure, volume, salinity, recovery ratio, time and energy. With these models, we were able to determine the right amount of pressure over time to achieve the best results using the minimum amount of energy.”

How big is the piston tank? It depends on the size of the system.

“Reverse osmosis operates on a wide range of scales,” Warsinger said. “Households in India often have a micro reverse osmosis system for their own home, where you could hold it in your hands. For our experiments, we’ve built a model system where the piston tank is about the size of a fire extinguisher. In a full-scale plant, it could be a hundred feet long. But the beauty of it is that it’s not a complex piece of equipment; it’s essentially a pipe, with a water-tight piston in the middle. But that piston tank changes everything.”

Warsinger’s lab has used this double-acting batch development to fuel several new advances in desalination. Abhimanyu Das, a Purdue Ph.D. student in mechanical engineering, has published research describing a variant of the process called “batch counterflow reverse osmosis.” By recirculating certain concentrations of water on both sides of the membrane, Das’ process is shown to be the most energy-efficient desalination process for high-salinity water, while requiring fewer components. And Purdue master’s student Michael Roggenburg has published research showing that a combination of batch reverse osmosis and renewable energy could conceivably deliver fresh water to the entire 1,954-mile border between the U.S. and Mexico.

“Water security is a huge issue around the world, which I’ve spent my whole career working on,” Warsinger said. “These results with batch reverse osmosis are really exciting. If we bring the cost down just a little bit, then desalination becomes a viable option for more places. It could be transformative.”

Patent applications have been filed via the Purdue Research Foundation Office of Technology Commercialization for these water treatment techniques. The research has received financial support from the Fulbright Commission in Colombia, the National Renewable Energy Laboratory and Purdue University.

Purdue University is a top public research institution developing practical solutions to today’s toughest challenges. Ranked the No. 5 Most Innovative University in the United States by U.S. News & World Report, Purdue delivers world-changing research and out-of-this-world discovery. Committed to hands-on and online, real-world learning, Purdue offers a transformative education to all. Committed to affordability and accessibility, Purdue has frozen tuition and most fees at 2012-13 levels, enabling more students than ever to graduate debt-free. See how Purdue never stops in the persistent pursuit of the next giant leap at https://purdue.edu/.

Energy consumption in reverse osmosis has decreased substantially over the last few decades thanks to the implementation of energy recovery devices, high efficiency pumps, and improved membranes. However, to further increase the adoption of the technology, its energy needs must still be reduced. Batch and semibatch reverse osmosis configurations have shown potential to be the most energy efficient reverse osmosis variants, but have remaining inefficiencies from brine mixing and high downtime. In this study, we modeled in new detail a further improved double-acting batch reverse osmosis system that uses a high-pressure tank with a reciprocating piston. A high-pressure pump is used to fill the inactive side of the high pressure tank with feed that pressurizes the reverse osmosis system during the permeate production stage; the feed is then used as the working fluid for the next cycle of the system. Additionally, to account for the dynamic behavior of the system under different operational conditions, a hydraulic simulation model was developed to accurately predict the evolution of the pressure and other important parameters over time. A specific energy consumption of 1.88 kWh/ m3 was calculated for seawater with a salinity of 35 g/kg, recovery of 50%, and a permeate flux of 15 LHM, and lower values SEC were obtained for lower permeate fluxes. Moreover, the downtime was found to be below 10% of the cycle time, without significantly increase the energy consumption of the system. This design also showed the potential to reduce the start-up time compared to previously proposed batch RO configurations.

High salinity waters (>7 wt%) remain a dominant challenge for reverse osmosis desalination, as the required osmotic pressures can exceed the burst pressure of the membranes. Osmotically assisted processes have been designed to circumvent this challenge, but have reduced efficiencies and extensive requirements for specialty pumps, stages and other equipment. Here, we present the first batch osmotically assisted process, which dramatically reduces the energy needs and required components of past processes. To do so, we develop an improved time-varying model which can capture the time-varying concentration profiles, fully discretized across the membrane module. This new process, batch counterflow reverse osmosis (BCFRO), recirculates the fluid on both sides of a membrane. A double-acting piston tank enables this brine recirculation to increase pressure over time. The combination of the new process with batch reverse osmosis, using the same components, can lead to a second law efficiency of 60% for high recovery of seawater. The analysis includes detailed trade-off mapping of recovery ratio per pass, total water recovery, water flux and pressures. Such an approach would be the best-in-class for higher salinities where the cost of energy is relatively important.

Access to sustainable clean water is a necessity for any successful civilization. The US-Mexico border has been experiencing a decline in the availability of this critical resource, stemming from mismanagement and heightened population which are exacerbated by climate change. If water is not adequately overseen, the region will be unable to support local societies and industry, effecting millions of inhabitants. A vision, articulated in Scientific American in 2019, outlined the potential for the development of a technology innovation park along the border which would provide sustainable water using renewable powered desalination. A version of this concept is demonstrated for the American side with configurations of coastal Seawater Reverse Osmosis desalination plants, sized to meet the public water demand of ~1000 MGal/day (~3.79 Mm3/day). The desalination and distribution of clean water is powered by offshore wind and onshore solar PV farms, which transfer energy over High Voltage Direct Current cables. One-hundred eight (108) renewable variations were simulated and demonstrated the ability to supply clean water at a levelized cost of 2.00–3.52 $/m3. When compared to 27 fossil fuel configurations, renewable powered variations avert adding the equivalent of 1.7–2,000,000 cars worth of CO2 pollution per year, avoid withdrawing the equivalent of 67–77,000 US households worth of water for power generation annually and add potentially over 100,000 more jobs. As water scarcity along the border becomes more prevalent, alternative sources of sustainable water will be crucial for bringing long term resource and economic stability to the region.

Comments are disabled
NEXT ARTICLE
Simpson Strong-Tie Gives FRP Installers an Edge with Introduction of Easy-to-Saturate, Flat-Weave Technology to 44-Ounce Fabrics
May 13, 2021
PREVIOUS ARTICLE
Smart Engineering May 2021 Table of Contents
May 13, 2021