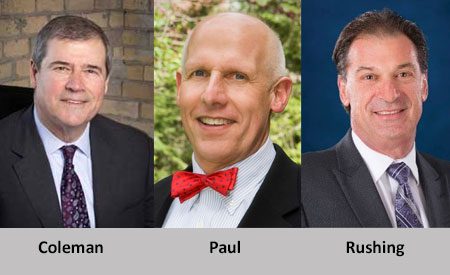 The ACI Foundation is a non-profit organization established by the American Concrete Institute (ACI) to promote progress, innovation, and collaboration by supporting research and scholarships, while also serving as an independent resource to provide thought leadership and strategic direction for the concrete industry.

Jeffrey W. Coleman, FACI, is a licensed professional engineer, Attorney at Law, and Principal Partner of The Coleman Law Firm, LLC, Minneapolis, MN. He is an ACI Past President, a Fellow of ACI, and has been an ACI member for 40 years. Coleman is the author of the book “Legal Issues in Concrete Construction,” published by ACI in 2004 (second edition published in 2014), and previously authored the “Concrete Legal Notes” section of Concrete International.

Coleman received both his BS in civil engineering in 1976 and MS in structural engineering in 1977 from Iowa State University, Ames, IA. Coleman is licensed as an engineer in Iowa, Minnesota, and Wisconsin and as a lawyer in Minnesota, Wisconsin, Iowa, and North Dakota; however, he practices regularly in other states through admission “Pro Hac Vice.” His master’s degree thesis work involved research funded by the Iowa Department of Transportation and studied fatigue behavior of air-entrained concrete. This led to his early involvement with ACI Committee 215, Fatigue of Concrete.

After receiving his master’s degree in structural engineering, Coleman moved to Minneapolis/St. Paul, where he practiced as a Structural Engineer with Ellerbe Associates, Inc. After completing his law degree in 1984, Coleman served as general counsel for Ellerbe, Inc. (later Ellerbe Becket, Inc. and now part of AECOM). After spending 2 years with a Minneapolis-based boutique construction law firm, he started his own firm in 1991, which was quickly merged and renamed Coleman, Hull & van Vliet, PLLP. In 2013, he founded The Coleman Law Firm, LLC—committed to continuing his representation of engineers, architects, and the concrete construction industry, including concrete contractors and suppliers.

Coleman represents engineers, architects, concrete contractors and suppliers, and building owners in all aspects of construction. He is consistently recognized as a construction “Super Lawyer” by Thomson Reuters publications. He is the Past President of the Minnesota Concrete Council (MCC) and a former Board member. He is also a sustaining member of the American Society of Concrete Contractors (ASCC).

Coleman has served five terms on the Board of Directors of the American Council of Engineering Companies, Minnesota, and is one of only two nonpracticing engineers to receive the Tom Roach Award for Outstanding Service and Motivation to the Consulting Engineering Professional Community. Coleman is a past member of the Minnesota Board of Architecture, Engineering, Land Surveying, Landscape Architecture, Geoscience, and Interior Design (the Minnesota Licensing Board), having served from 2000 to 2004. He is a past member of the University of Minnesota Concrete Conference Planning Committee. Coleman is a frequent lecturer on topics involving construction law but also is a regular practitioner who is involved daily with construction disputes involving concrete. In 2020, he was recognized by Concrete Construction magazine as one of “The Year’s Most Influential People” in the concrete industry.

Paul is very active in ACI and is the chair of the Membership Committee and past chair of the International Project Awards Committee. As member and past chair of Committee 124, Concrete Aesthetics, he has compiled the Notable Concrete e-publication for ACI conventions since 2005. He also is a past member of the American Society of Civil Engineers (ASCE), having served on the editorial panel of the Journal of Leadership and Management in Engineering, and ASTM International, serving on Committee E06, Performance of Buildings. He has contributed several articles to Concrete International on projects involving the renovation or restoration of historic concrete structures and served on the editorial panel for both volumes of The Sustainable Concrete Guide, published in 2010 by the U.S. Green Concrete Council.

Paul received his AB from Dartmouth College, Hanover, NH, and his MS in civil engineering and MArch from the Massachusetts Institute of Technology, Cambridge, MA, in 1973 and 1981, respectively. He is a licensed professional engineer in Pennsylvania, Delaware, New Jersey, and six other states; a registered architect in New Jersey; and a LEED Accredited Professional in building design and construction.

William E. Rushing, Jr., FACI, is a Vice President and Manager of the Civil and Environmental Engineering Department at Waldemar S. Nelson & Co., Inc, New Orleans, LA, USA. He has been employed there for 39 years.

A Fellow of ACI, Rushing served as ACI President in 2014-2015. He is Chair of the ACI Chapter Activities Committee and serves on the Board of Trustees of the ACI Foundation and Advancing Organizational Excellence (AOE). He is a member of ACI Committees 314, Simplified Design of Concrete Buildings; 351, Foundations for Equipment and Machinery; 376, Concrete Structures for Refrigerated Liquefied Gas Containment; E702, Designing Concrete Structures; and S801, Student Competitions; and ACI Subcommittees 314-B, Preliminary Design and Economic Impact; 314-D, Design Aids; and 351-D, Design Provisions for Heavy Industrial Concrete Structures Including Turbine Pedestals.

He chaired the ACI Strategic Plan Task Group, the Task Group on Managing Translations of ACI Products and Services, and the ETC Product Development Committee. He is past Chair of the ACI Financial Advisory Committee and a past member of the Task Group on Communication Platforms for Delivery of

Rushing received the 2018 ACI Education Award, 2011 ACI Henry L. Kennedy Award, and 2003 ACI Chapter Activities Award. He was inducted into the Louisiana State University Civil and Environmental Engineering Hall of Distinction. A member of the ACI Louisiana Chapter, he previously served on the chapter’s Board of Direction and was its President in 1998. He received the 2010 ACI Louisiana Chapter Distinguished Member Award and the chapter’s 2004 Chapter Activity Award.

He received his BS in civil engineering from Louisiana State University, Baton Rouge, LA, in 1981. He is a licensed professional engineer in Louisiana, Mississippi, Alabama, Arkansas, Georgia, New Mexico, Texas, and Arizona. Rushing is also a member of the American Society of Civil Engineers (ASCE) and the Structural Engineers Institute (SEI).