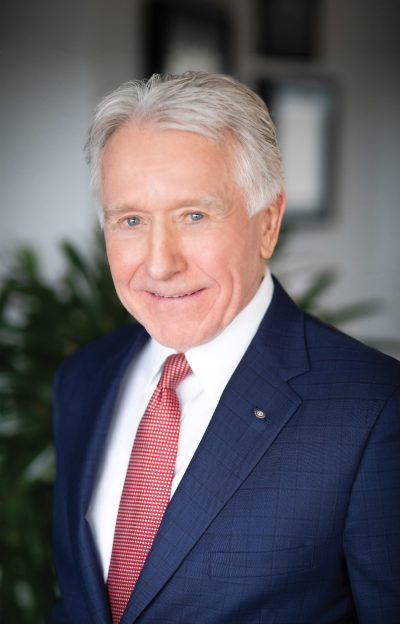 Cary S. Kopczynski, FACI, is CEO and Senior Principal of Cary Kopczynski & Company (CKC), an award-winning structural engineering firm with offices in Seattle, WA, and Chicago, IL, USA. CKC designs major urban buildings throughout the United States and beyond. The firm has won over 70 regional, national, and international awards and has been selected several times by Zweig White and Civil + Structural Engineer magazine as a top structural engineering firm to work for.

Kopczynski is a licensed civil and structural engineer in many states and a recognized expert in the design of reinforced concrete and post-tensioned concrete building structures. He has authored numerous articles in the fields of structural analysis, design, and construction. He serves on the Board of Trustees of the ACI Foundation and on ACI’s Board of Direction, and previously served on the Financial Advisory Committee. Kopczynski served for many years on ACI Committee 318, Structural Concrete Building Code, and Joint ACI-ASCE Committee 352, Joints and Connections in Monolithic Concrete Structures. He was honored with the 2017 ACI Alfred E. Lindau Award and 2015 ACI Charles S. Whitney Medal. He is a Past President of the ACI Washington Chapter.

Kopczynski has served on the Board of Directors and the Executive Committee of the Post-Tensioning Institute (PTI). He is a PTI Fellow and a past Chair of PTI’s Technical Advisory Board. He has served on PTI committees related to building design and professional development.

Kopczynski was made an Honorary Member of the Wire Reinforcement Institute (WRI) for his work in advancing the use of high-strength deformed wire reinforcing in buildings.

ENR magazine selected him as one of its “Top 25 Newsmakers” in both 2016 and 2007 based on CKC’s pioneering work in the fields of high-strength reinforcing bars and steel fiber-reinforced concrete (SFRC). CKC has since advanced the use of SFRC by implementing it in major high-rise buildings and continues to pioneer its use in new applications.

Antonio Nanni, FACI, is Professor and Chair of the Department of Civil, Architectural, and Environmental Engineering at the University of Miami, Miami, FL, USA. He has been an active member of many ACI committees, including 318, Structural Concrete Building Code; 440, Fiber-Reinforced Polymer Reinforcement; 549, Thin Reinforced Cementitious Products and Ferrocement; the International Advisory Committee; and the Committee on Codes and Standards Advocacy and Outreach. Nanni also serves as a Trustee for the ACI Foundation. His past service to ACI includes membership on the Board of Direction, Technical Activities Committee, Educational Activities Committee, and Financial Advisory Committee. He has been recognized by ACI for his many contributions with the 2021 Arthur J. Boase Award, 2018 Joe W. Kelly Award, 2006 Chapter Activities Award, and 1999 Delmar L. Bloem Distinguished Service Award.

Nanni’s research interests are in construction materials and their structural performance and field application, including monitoring and renewal with a focus on sustainability. He is currently Site-Director of the National Science Foundation’s Industry/University Cooperative Research Center for the Integration of Composites into Infrastructure (CICI). He is a licensed professional engineer in Italy and the states of Florida, Pennsylvania, Missouri, and Oklahoma.

During the past 30-plus years, Nanni has studied concrete and advanced composite-based systems as the principal investigator on several research projects sponsored by federal and state agencies and private industry. He has also contributed to field projects that have received awards from organizations such as the Florida Engineering Society (FES) and the International Concrete Repair Institute (ICRI). His research in materials and structures has impacted the development of guides, specifications, and codes in the United States and abroad. Nanni is the Editor-in-Chief of the American Society of Civil Engineers (ASCE) Journal of Materials in Civil Engineering (JMCE) and serves on the editorial board of other technical journals. He has advised 60-plus graduate students pursuing master’s and doctoral degrees and has published extensively (260-plus papers in refereed journals, 380-plus papers in conference proceedings, and co-author of two books).

Nanni has received numerous awards, including the 2019 Knight of the Order of the Star of Italy from the President of Italy; 2018 John B. Scalzi Research Award from The Masonry Society; ASCE 2017 Richard R. Torrens Award for outstanding performance as editor of JMCE; 2017 Outstanding Service Award, Florida Engineering Society; and 2016 Foreign Member, Accademia delle Scienze dell’Istituto di Bologna, Italy.

Michael C. Brown, FACI, is a Senior Engineering Manager and Senior Technical Principal in the Herndon, VA, USA, office of WSP USA, Inc. He serves as the firm’s U.S. Bridge Asset Management Lead, a role in which he conducts condition evaluation and asset management of bridges and transportation structures, employing his broad knowledge of materials testing and nondestructive evaluation techniques; develops preventive maintenance, repair, and rehabilitation strategies; and coordinates structural load testing and in-place monitoring, including instrumentation and data analysis.

Brown has been an active member of ACI since 1997 and became a Fellow of the Institute in 2012. He has served on ACI committees including the Technical Activities Committee (Chair beginning in 2020); 222, Corrosion of Metals in Concrete; 345, Bridge Construction and Preservation (Chair 2006 to 2012); 365, Service Life Prediction; and 444, Structural Health Monitoring and Instrumentation; and Joint ACI-ASCE Committee 343, Concrete Bridge Design (Chair 2016 to present); as well as the ACI Foundation Concrete Research Council.

Brown is the Secretary/Second Vice President on the Board of Direction for the ACI Virginia Chapter. His contributions to Transportation Research Board (TRB) standing committees include member and current Chair of Bridge Preservation, member and past Chair of Structures Maintenance, and former member of Corrosion (now merged with Structures Maintenance). He serves on Federal Highway Administration and AASHTO expert task groups focused on bridge preservation.

Since 1990, Brown has performed condition evaluation, corrosion evaluation and mitigation, maintenance, preservation, and rehabilitation of highway bridges, low- and mid-rise buildings, and parking structures. He began his career as a project engineer with a national consulting firm performing building condition assessment and structural, roofing, and dampproofing rehabilitation designs. Brown was Associate Director of Research within the Virginia Department of Transportation (VDOT), where he worked for 15 years managing and conducting research, technical assistance projects, and technology transfer activities related to transportation structures, pavements, and geotechnical engineering in close collaboration with VDOT central office divisions and districts. Brown also served as a visiting faculty member and adjunct lecturer at the University of Virginia, Charlottesville, VA, where he taught courses in structural design, materials, and construction and advised graduate research from 2003 to 2017.

Brown received his BS in civil engineering from Virginia Polytechnic Institute and State University (Virginia Tech), Blacksburg, VA, in 1991. He returned to Virginia Tech in 1997 under a National Science Foundation Graduate Research Traineeship program to pursue his MS and PhD in civil engineering, where he completed research on performance of corrosion-inhibiting admixtures and post-treatments for reinforced concrete and field performance and service-life prediction for epoxy-coated reinforcement in concrete bridges. He is a licensed professional engineer in the Commonwealth of Virginia.

DeCarlo has worked in the concrete industry for more than 25 years—from installing concrete in the field to managing multimillion dollar concrete projects and running a commercial/industrial concrete contracting company. TWC Concrete mainly performs work in the Midwest United States, east of the Mississippi River.

DeCarlo is a member of the ACI Financial Advisory Committee and ACI Committees 301, Specifications for Structural Concrete, and 330, Concrete Parking Lots and Site Paving. He is Chair of ACI Subcommittees 301-F, Architectural Concrete – Section 6, and 301-L, Tilt-Up Construction – Section 12.

DeCarlo is a Vice President of the American Society of Concrete Contractors and serves on its Board of Directors. He is an ACI-certified Field Testing Technician – Grade I, a Post-Tensioning Institute-certified Level 2 Unbonded PT Installer and Inspector, and a Certified Professional Constructor (CPC) from the American Institute of Constructors.

John W. Gajda, FACI, is a Principal and Co-Founder of MJ2 Consulting, PLLC, of Cedar Park, TX, USA. Gajda’s expertise is in the areas of mass concrete and thermal properties of concrete, crack investigation, and delayed ettringite formation. For more than 20 years, he has worked on mass concrete issues on approximately 1000 projects throughout the world.

In 2008, he was named “Our country’s mass concrete expert” by Concrete Construction magazine. Gajda routinely gives presentations about mass concrete and has written many articles and publications on the topic, including the Portland Cement Association’s (PCA) Mass Concrete for Buildings and Bridges. Prior to his work with mass concrete, Gajda spent several years performing nondestructive testing of concrete structures throughout North America. He also performed research and development activities for PCA on insulated concrete form construction and environmental aspects of cement and concrete.

Gajda received his BS in ceramic engineering and his MS in material science engineering from Iowa State University, Ames, IA, USA, and was part of the school’s concurrent degree program. He is a licensed professional engineer in 27 states and four Canadian provinces.

Khayat has conducted pioneering work in the field of rheology of cement-based materials and self-consolidating concrete. His other research interests include high-performance concrete, fiber-reinforced composites, infrastructure rehabilitation, underwater concrete, and grouting. He has authored and co-authored 460 technical papers and seven book chapters, edited and co-edited 16 books/proceedings, and was recently listed by Elsevier among the 150 most-cited people in civil engineering in the world.

Khayat is active on several ACI committees, including the Technical Activities Committee and the ACI Materials Journal Editorial Board. He serves on Transportation Research Board (TRB) and RILEM technical committees and served on the Development Advisory Committee for RILEM in the capacity of Convener for North America. He has chaired/co-chaired several international conferences, including the 2020 Gordon Research Conference (Ventura, CA, USA); SCC2016 (Washington, DC, USA); SCC2010 (Montreal, QC, Canada); SCC2018, 2014, 2009, and 2005 (China); and Advances in HPC in the Middle East 2008 and 2009 (United Arab Emirates).