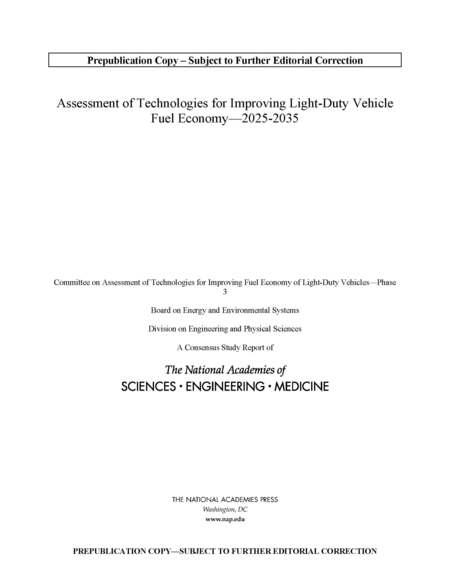 WASHINGTON – Increased use of zero emission vehicles (ZEVs) presents the greatest opportunity to improve the energy efficiency of light-duty vehicles – i.e., passenger vehicles and light trucks – over the period of 2025-2035, says a new congressionally mandated report from the National Academies of Sciences, Engineering, and Medicine. The U.S Department of Transportation, U.S. Department of Energy, and the U.S. Environmental Protection Agency should facilitate the development and deployment of zero emission vehicles, given their potential for the future of energy efficiency, petroleum reduction, and greenhouse gas emissions reduction for light-duty vehicles. In addition, the National Highway Traffic Safety Administration (NHTSA) should set vehicle efficiency standards for 2035 to be in line with the predicted increased sales of ZEVs at that time, the report says.

With electric vehicle costs likely to fall and reach parity with that of internal combustion engine vehicles, the period from 2025-2035 could see a significant transformation in the automobile industry, says Assessment of Technologies for Improving Light-Duty Vehicle Fuel Economy—2025-2035. The report, the most recent in a series on fuel efficiency standards, says all types of vehicles have opportunities to improve energy efficiency in that period, including those with internal combustion engine, hybrid, battery electric, fuel cell, and connected and automated technologies. The report also explores the potential for fuel efficiency of autonomous vehicles and how best to regulate them.

Preparing for the Widespread Use of Zero Emission Vehicles

The corporate average fuel efficiency (CAFE) standards for 2035 should be set at a level consistent with market dominance of ZEVs at that time. To aid in this market penetration, the federal government should continue its use of plug-in hybrid, fuel cell, and battery electric vehicle purchase subsidies until financial and psychological consumer barriers to purchasing such vehicles have been overcome. In addition, DOT, EPA, and DOE should coordinate to facilitate electric charging and hydrogen refueling infrastructure deployment with relevant stakeholders, including state and local government agencies and industry. Congress should appropriate funds for this effort, and the agencies should create a national public-private partnership to lead coordination.

“The period from 2025-2035 could bring the most fundamental transformation in the 100-plus year history of the automobile,” said Gary Marchant, Regents Professor of Law and director, Center for Law, Science, and Innovation at Arizona State University, and chair of the committee that wrote the report. “The CAFE program is now entering a time of major change, with new technologies enabling a pathway to zero emissions, and a future with a diversity of energy sources and modes of mobility. We expect that it will continue to play an important role in the future and serve as an example for other energy and climate policies administered by government agencies in the U.S. and around the world.”

The existing CAFE program, administered by NHTSA, is quickly becoming outdated as a result of legal, technological, and economic developments and will need to be updated for the 2025-2035 period, the report says. The current legislation for the CAFE program only specifies its standards until 2030, so Congress should extend the program as well as consider changes to the program design and its interaction with other related policies and regulations. The CAFE program authorization should be amended to include addressing climate change as a core objective of the program, specifically including the goal of reducing greenhouse gas emissions. Additionally, the report stresses the need for Congress to set a goal that all new light-duty vehicles will have zero net greenhouse gas emissions by a specific date that aligns with a national decarbonization goal, including interim goals.

The price of ZEVs, fueling infrastructure, performance attributes, and consumer interest in and comfort with the technology will be major obstacles for their expanded use, the report says. For consumers, electric and fuel cell vehicles represent a different energy source and different fueling behavior than that for most vehicles today. They have lower operating and repair costs, and may have better vehicle performance. Consumer resistance to novel technology is a significant issue in acceptance of new technologies, so policy interventions beyond purchase subsidies may be needed to address these barriers. Such policies may include investment in charging and refueling infrastructure, or consumer education and exposure to the new technology and its benefits.

To facilitate greater coordination and integration among federal agencies regarding a regulatory framework for sustainable transportation, the Executive Branch should create an inter-agency task force with entities including DOT, EPA, DOE, the U.S. Department of Health and Human Services, the U.S. Department of Housing and Urban Development, and the White House. The efforts of this task force would move the nation toward a more sustainable system of transportation and mobility, the report says.

The study — undertaken by the Committee on the Assessment of Technologies for Improving Fuel Economy of Light-Duty Vehicles–Phase 3 — was sponsored by the National Highway Traffic Safety Administration. The National Academies are private, nonprofit institutions that provide independent, objective analysis and advice to the nation to solve complex problems and inform public policy decisions related to science, technology, and medicine. They operate under an 1863 congressional charter to the National Academy of Sciences, signed by President Lincoln.