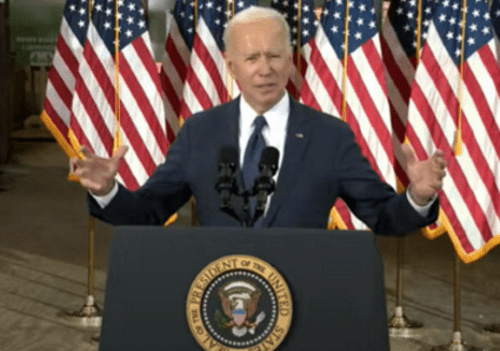 As reported by the AASHTO Journal: https://aashtojournal.org on April 1, 2021 - in Financial, News

The $2.3 trillion infrastructure investment package unveiled by the Biden Harris administration on March 31 – entitled the American Jobs Plan – allocates $621 billion in overall spending to the transportation sector, with the largest slice of that funding aimed at spurring major growth in the electric vehicle market.

“Is it big? Yes. Is it bold? Yes. But we can get it done,” President Joe Biden said during a press event in Pittsburgh. “The heart of the plan is modernizing transportation infrastructure – our roads, bridges and airports. It grows the economy in key ways. It makes it easier and more efficient to move goods, get to work, and become more competitive around the world. It will unlock traffic, reduce the bottlenecks at our ports and airports, keep people safe, and connect our cities, towns, and tribes across the country.”

The president described this plan as a “once in a generation investment in America, unlike anything we’ve ever seen or done since we built the Interstate highway system and the space race decades ago.”

The direct transportation spending proposed by the administration includes:

The plan also includes billions for a host of “equity” initiatives in the transportation sector, such as $20 billion to fund a “new program” to “reconnect neighborhoods” cut off by past transportation investments, while ensuring any new transportation projects increase opportunity, advance racial equity and environmental justice, and promote affordable access.

Another $25 billion is being set aside in the plan to create a dedicated fund for “ambitious projects that have tangible benefits to the regional or national economy but are too large or complex for existing funding programs.”

The American Association of State Highway and Transportation Officials released a statement applauding the emphasis the Biden Harris administration placed on investing in infrastructure within the American Jobs Plan in order to shore up and modernize the nation’s multimodal transportation system for decades to come.

“Today’s announcement is a first step in a conversation about a generational investment in transportation infrastructure addressing climate change, resiliency, and equity that will support improved quality of life through innovative, safer and cleaner mobility options,” explained Jim Tymon, AASHTO’s executive director, in a statement.

“America’s state DOTs look forward to playing a leading role with the Administration and Congress to achieve the objectives laid out in today’s plan.”

AASHTO also emphasized that it is “critical” that Congress and the administration work together in a bipartisan manner to reauthorize the federal surface transportation programs before the end of September when the current Fixing America’s Surface Transportation or FAST Act – extended for a year in late 2020 – expires.

The organization added that a long-term and robust reauthorization bill will provide state departments of transportation with the “predictability they need” to continue to improve the transportation network to provide greater access to opportunities for everyone including employment, education, health services, and recreation.

[Victoria Sheehan. Commissioner of the New Hampshire Department of Transportation and AASHTO’s 2020-2021 president, emphasized the need for transportation funding predictability during a Senate Committee on Environment and Public Works hearing in February.]

The Biden Harris administration is also proposing to spend $100 billion on “proven workforce development programs” in its American Jobs Plan, targeted at underserved groups and getting our students on paths to careers before they graduate from high school. That includes $40 billion to support a new Dislocated Workers Program and sector-based training to help workers who lose jobs through no fault of their own gain new skills and to get career services they need with in-demand jobs.

Addressing equity in the transportation sector as well as workforce development issues are also key AASHTO priorities, as outlined in a resolution passed unanimously at its 2020 virtual annual meeting by the group’s board of directors pledging to address issues related to race, equity, diversity, and inclusion.

Other funding components of the administration’s plan include $111 billion for improving water infrastructure and replacing lead service lines; $100 billion for broadband internet investments; $100 billion to make the nation’s electrical grid more resilient and put the grid “on a path to achieving 100 percent carbon-free electricity by 2035.”

The plan also includes $180 billion to fund technology research and developments efforts at laboratories and universities across the nation.

However, to pay for all the one-time investments included in the $2.3 trillion American Jobs Plan, the administration is proposing to implement a total of $2 trillion worth of largely corporate tax increases over the next 15 years. Those tax increases include:

In news stories prior to the plan’s introduction, U.S. Transportation Secretary Pete Buttigieg said neither would be included in the Americans Jobs Plan.