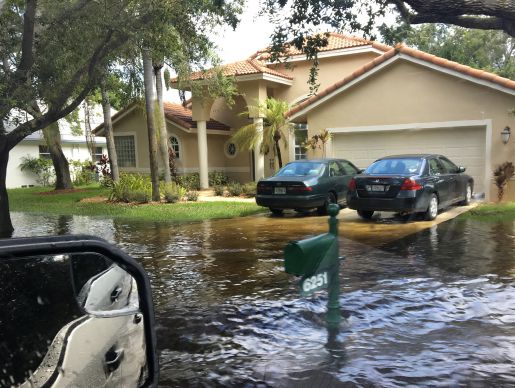 As the U.S. population mushrooms in some areas and development continues to create impervious surfaces, both factors put increased demand on stormwater infrastructure. With more-frequent and intense storms and snowmelt on top of flooding events, an increasing amount of runoff from impervious surfaces risks flooding of communities, stream erosion and water pollution. 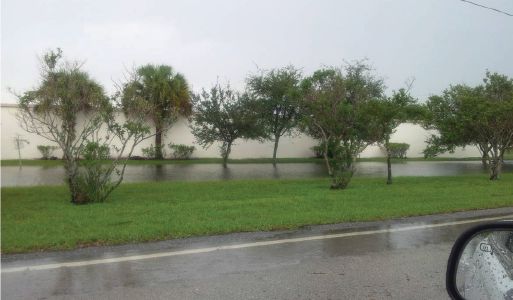 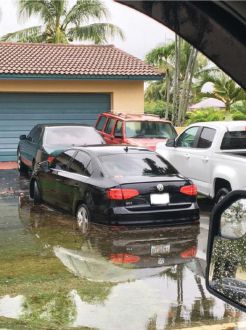 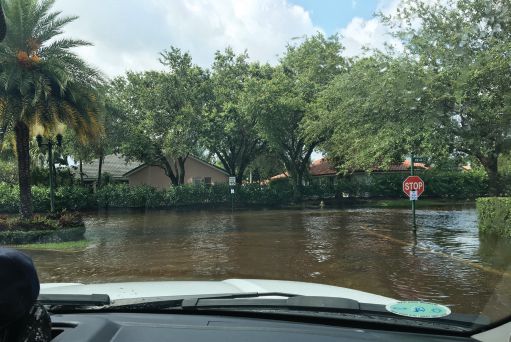 The Coral Springs stormwater master plan will upgrade areas downstream of those prone to historical flooding.

Many of the country’s legacy stormwater systems struggle with the high cost of retrofits needed to address urban flooding and climate change. Upgrading large networks of aging systems underneath densely populated areas carries significant costs and engineering challenges, according to ASCE.

The city of Coral Springs, Fla., is one example of many nationwide that’s taking action to mitigate issues related to stormwater, and it serves as a blueprint for other municipalities engaging in similar efforts.

The city shares a border with the Florida Everglades, creating stormwater-management challenges during heavy bouts of rain. The critical wetlands ecosystem provides drinking water for one-third of Floridians as well as irrigation for much of its agriculture. The Everglades also serves as a form of “green infrastructure” by filtering pollutants, absorbing excess nutrients, replenishing aquifers and reducing flooding—all leading to improved water quality.

Just about 12 miles east of Coral Springs is the Atlantic Ocean, where researchers continuously eyeball sea-level rise and its impacts, including on underground infrastructure.

“We’re seeing redevelopment, but we do not anticipate any increases in impervious areas or runoff,” he adds.

In his career, Norris—who earned a B.S. in civil engineering from The Citadel—developed a point of reference through previous experience as director of stormwater, pavement and traffic operations in St. Petersburg, Fla., on the Gulf Coast. He also served as director of public works for Edenton, N.C., located in the state’s Inner Banks region.

Norris points out that in Coral Springs, increased regulation and use of Best Management Practices by developers, consultants and regulators led to a reduced impact to stormwater quality and quantity. In addition, Coral Springs recently embraced a strategy for stormwater mitigation that’s starting to take hold in other communities: a stormwater utility assessment on property taxes.

To address its aging infrastructure and drainage systems—especially in commonly flooded communities—Coral Springs implemented a stormwater program funded by an annual stormwater utility assessment, which appeared for the first time on property owners’ 2019 tax bill. The stormwater utility assessment applies to multi-family, commercial property and private community homeowners at a varying rate structure not based on property value but on the rate of impervious area per parcel.

The city initially sought a general obligation bond for vital capital improvements, but voters turned it down in March 2018. Some 17 of the 31 municipalities in Broward County—of which Coral Springs is a part—had implemented a stormwater utility assessment for homeowners to fund critical drainage improvements. The stormwater utility assessment helped Coral Springs prepare a stormwater master plan to evaluate drainage conditions in all neighborhoods and prioritize improvements.

Stormwater utility systems similar to Coral Springs are on the rise in the United States, with more than 40 states having at least one, according to ASCE. Also expanding are impervious surfaces in cities and suburbs, which exacerbates urban flooding, resulting in $9 billion in damages annually. Polluted runoff from pavement impacts water quality, with nearly 600,000 miles of rivers and streams as well as more than 13 million acres of lakes, reservoirs and ponds considered impaired.

Federal funding, which averages $250 million annually and has increased, still leaves a funding gap of $8 billion to comply with current regulations.

Unlike many U.S. cities, the stormwater infrastructure in Coral Springs is at most 60 years old.

“Our pipes are relatively new, and we are being proactive to maintain the infrastructure to avoid catastrophic failure,” says Norris.

“While these are great products for certain applications that are still used today, they do have downsides,” Norris points out. “RCP has shorter sections with a short joint overlap. This makes it susceptible to opening up and leaking at the joints through root intrusion. Joint repair can be costly and temporary.”

Older CMP pipe is prone to rusting and pipe collapse, Norris says, adding that newer alloys and polymer coatings have addressed some of these issues and prolonged the life of CMP.  High-density polyethylene (HDPE) pipe is a corrugated smooth-wall pipe that comes in longer lengths with fewer joints and longer gasketed joint overlaps. 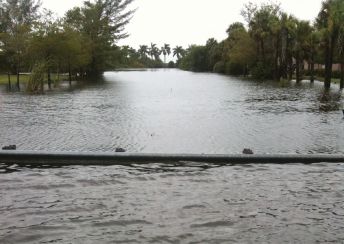 “Similar technologies have been used to develop polypropylene pipe with the same benefits and a higher structural capacity,” he adds. “With that said, I see a need to upgrade some outfall pipes within the city to increase capacity. Many of these pipes run between homes with very little setback and small easements. Utilizing HDPE or polypropylene pipe in these cases is ideal because they are lightweight, and have a long life and long sections.”

Another benefit to the newer pipes is that they can be installed with a mini-excavator. Coral Springs’ engineering standards currently only permit RCP in a right-of-way. Norris notes the city’s standards are currently under review to consider adding HDPE and polypropylene to acceptable right-of-way pipe material. 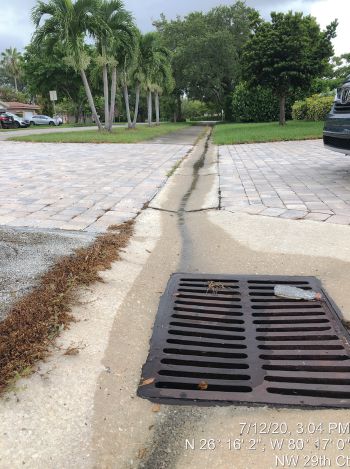 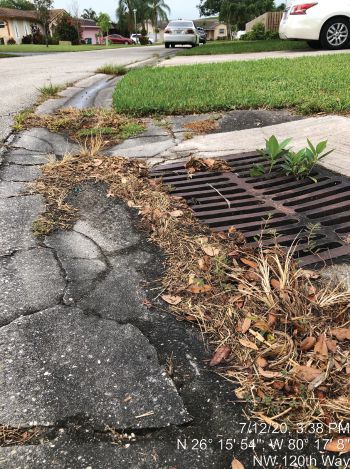 Storm-system improvements such as re-grading swales and conveyance ditches as well as replacing and upsizing pipes help working systems operate at optimal capacity.

Norris says the implementation of a stormwater utility assessment will help the city be proactive in its stormwater-management approach.

“Traditionally, stormwater maintenance has been performed by street departments with municipal governments. This often led to stormwater infrastructure being ignored until there was a problem,” Norris points out. “Stormwater utility funds make it more feasible to have a dedicated stormwater crew, and follow a similar structure of water and sewer utility funds.”

“Everyone wants to see a return on their investment, and quick projects that result in flood reduction show the value of the stormwater assessment,” adds Norris. “A comprehensive street-sweeping program also shows residents that the city is being proactive. It is important to educate the public on the benefits of street sweeping and that it’s not just to keep things pretty and clean.”

According to Norris, using an inspection and cured-in-place-pipe (CIPP) lining program in areas where there’s repeat roadway or yard depressions shows an immediate return with little disturbance.

Another strategy to keep on top of stormwater infrastructure is conducting condition assessments to prioritize upgrades. Technologies such as CCTV are used to capture images upon which decisions can move forward. Coral Springs’ stormwater utility is in its infancy and doesn’t have a scheduled CCTV inspection program or CIPP lining program, having utilized contractors to perform such work on an as-needed basis.

Norris envisions adding such programs in the near future to ensure a comprehensive approach to the city’s stormwater asset management. In conducting system upgrades, Norris notes that Coral Springs’ improvements are programmed based on repetitive loss and historical flooding.

“My field approach has always been to head downstream to identify the scope of the flooding,” he says. “When we see systemwide flooding in a basin, more often than not there will be a downstream bottleneck that will need to be upgraded.”

“In the case of the city of Coral Springs, we have six drainage districts that independently maintain the canal system,” Norris says. “We also have Florida Department of Transportation and Broward County systems within the city. Ultimately, the Southwest Florida Water Management District regulates drainage in the region.”

Coral Springs will begin its stormwater master plan next year to identify areas of concern. The master plan will use data and modeling from all stakeholders to identify potential improvements within the system and its supporting systems.

After projects are identified and ranked, the city will hire a consultant for design and permitting. Meanwhile, surveyors have taken to the streets to mark areas where stormwater improvement projects are commencing.

In the Meadows and Dells, a Coral Springs neighborhood developed from 1965 to 1966, crews are beginning work on a stormwater improvement project that will be constructed in three phases. The scope of work for the first phase in 2021 includes installation of approximately 1,000 linear feet of 15-inch RCP, 14 new drainage structures, 7,800 linear feet of valley gutter, swale regrading, and roadway and driveway restoration to improve water quality and storage.

“RCP is expected to have a life expectancy of more than 75 to 100 years,” notes Norris. “Improvements also will include re-grading swales and conveyance ditches to provide additional water quality and direct stormwater runoff to the existing canal system.”

Some municipalities opt to consider repairs over replacement, primarily due to budgetary concerns. At heart is the question of whether to “pay now or pay more later.” Norris says he considers many variables when looking at replacement vs. lining.

“If an upgrade is needed due to capacity, it almost always makes sense to replace,” he points out. “An exception may be if there are conflicts that prevent replacement and additional conveyance may be added. I always look at CCTV for grade breaks and, depending on the severity, it may disqualify a candidate for CIPP.”

Depth and conflicts are the biggest deciding factors for CIPP, Norris points out.

“If it is a shallow, small-diameter pipe under grass, it usually makes economic sense to replace the pipe,” he adds. “The material and size should be considered as well. Large-diameter RCP with leaking joints can have joint repairs completed for a fraction of the cost of CIPP.”

CMP that has lost its shape due to rust and rot should be replaced, Norris notes. He also likes to consider the age of other infrastructure when considering CIPP.

“If the road is due to be resurfaced or the water or sewer lines need to be upgraded, I would lean more toward a total rebuild in the area,” he says.