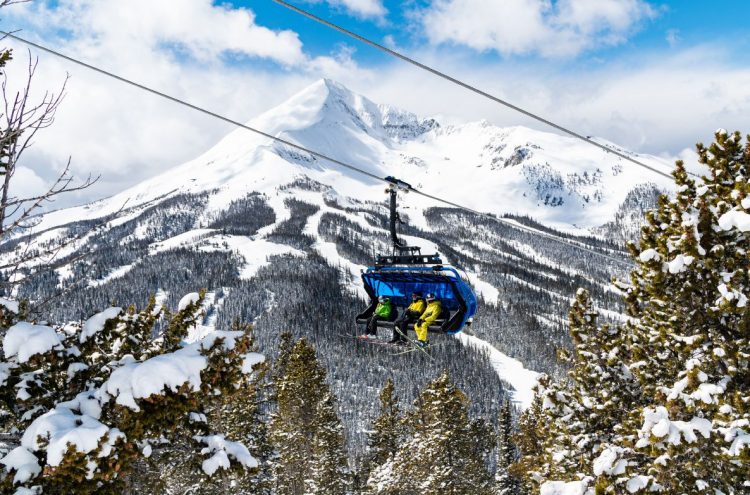 Big Sky Resort’s Ramcharger 8 is the first eight-seat chairlift in North America and one of the most technologically advanced chairlifts in the world. (Big Sky Resort)

The most modern chairlift ever built in North America now is open at Montana’s Big Sky Resort.

Montana’s Big Sky Resort, where wide-open spaces meet dramatic peaks to provide world-class ski experiences, is the second-largest ski resort in the United States by acreage. Opened in 1973 and founded by Montana native Chet Huntley, former co-anchorman of the “Huntley-Brinkley Report” of NBC News, the resort offers more than 5,800 acres (about 9 square miles) of terrain and a vertical drop of 4,350 feet.

Boyne Resorts purchased the resort in 1976, following Huntley’s death from cancer in March 1974, and the resort grew steadily over the following decades, adding lifts and more than tripling the terrain available for skiing and snowboarding. With a history of innovation in the ski industry that includes introducing the world’s first triple and quad chairlifts as well as the first high-speed six-person chairlift, the resort made headlines once again in 2018 when it introduced Ramcharger 8, an eight-seat chairlift that sets a new standard for lift technology. Boyne Resorts partnered with the Doppelmayr shop in Wolfurt, Austria, to bring the advanced lift to Big Sky.

“Doppelmayr and Boyne Resorts have been collaborating for over 40 years and together have introduced many firsts to the ski industry,” says Stephen Kircher, president, Boyne Resorts. “We’re incredibly proud to bring the first eight-seat chairlift to North America.” 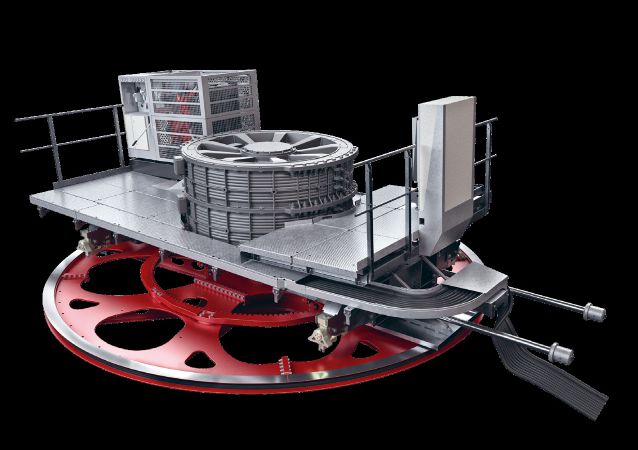 As detailed in the accompanying “Construction Timeline,” the new 4,367-foot-long chairlift replaced the former detachable quad chairlift, which is now the resort’s Shedhorn 4 lift, from the base area to the summit of Andesite Mountain. Moving at a speed about 11 mph, Ramcharger 8 can whisk up to 3,200 skiers and snowboarders up the mountain every hour.

Safety is a key consideration in all aspects of the lift’s design. In 1999, Doppelmayr launched a fail-safe system that monitors the position of the haul rope directly on the sheave assemblies and recognizes any deviation of the rope from the sheave groove at an early stage, thus significantly reducing the risk of deropement.

Guests also benefit from ergonomically shaped, extra-wide heated seats; weather-proof bubbles in Big Sky’s signature blue color; and wide footrests ideally suited for skiers and snowboarders. All 65 chairs feature the new Ramcharger 8 logo and different printed designs on the chairbacks, creating visual interest and distinctive styling for the installation’s overall look. Mesh banners on the back of the chairs provide optimal advertising space, as they can be custom printed and easily replaced in line with promotional needs and the season. A particular eye-catcher at the bottom station is a huge high-definition video screen, providing Big Sky’s guests with the latest information on trails and weather conditions. 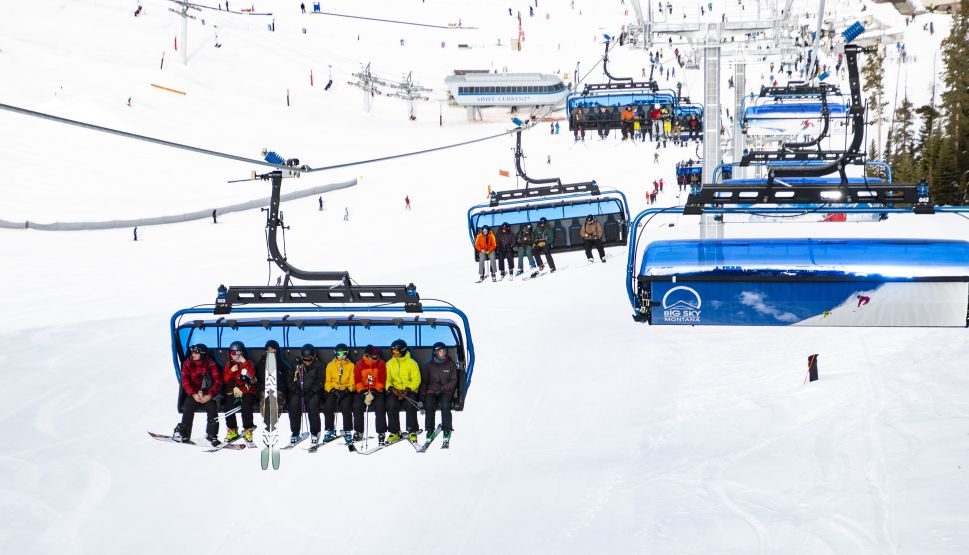 The new 4,367-foot-long chairlift moves at about 11 mph, whisking up to 3,200 skiers and snowboarders up the mountain every hour. (Big Sky Resort) 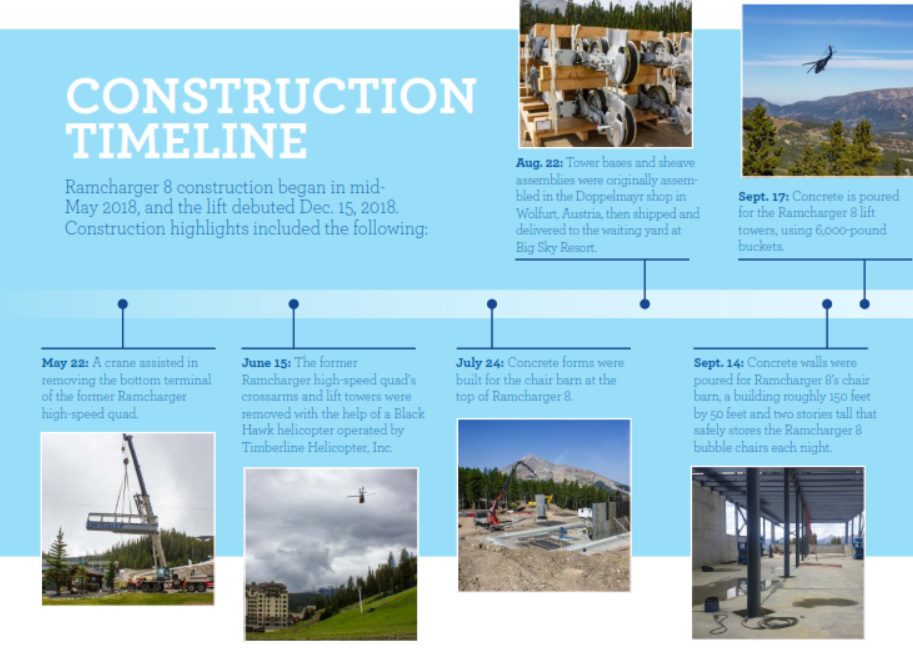 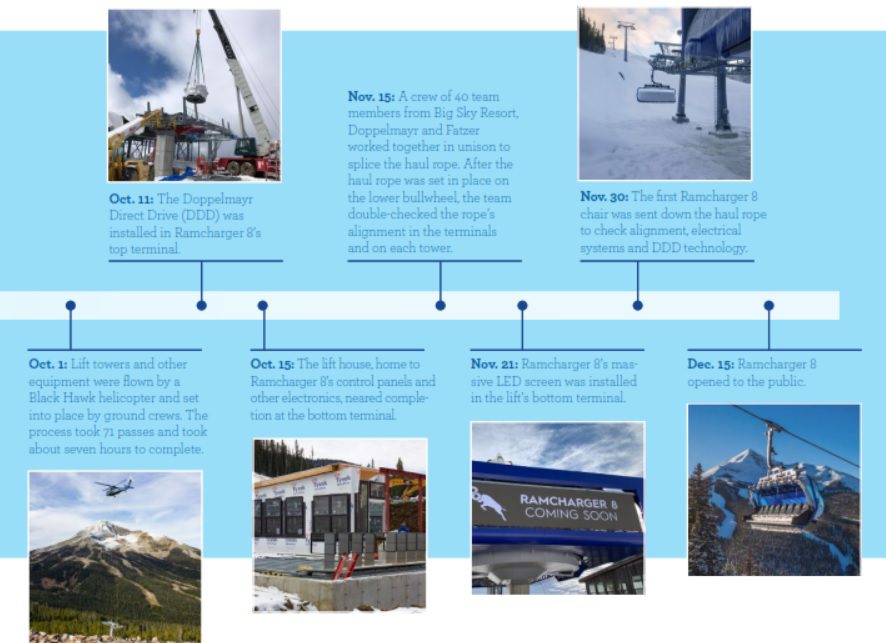 In addition to guest comfort, Doppelmayr designed the lift with operators and maintenance techs in mind. The centerpiece of the installation is the new Doppelmayr Direct Drive (DDD), a gearless drive that sits on top of the bullwheel in the top terminal, and minimizes vibration and noise as well as improves energy-efficiency and ease of maintenance. The low weight of the individual components used in the drive’s modular ring construction make it suitable for helicopter installation, plus it can be transported using a standard truck.

The DDD uses a hermetically sealed permanent magnet synchronous motor, which is water-cooled and enables eco-friendly heat recovery. Water cooling also dispenses with loud fan noise. Because the drive doesn’t require a gear unit, no gearbox oil is required, and associated maintenance costs no longer apply. Because the gearbox and related shafts have been removed from the equation, all braking is performed directly on the bullwheel.

Ramcharger 8’s haul rope, or “cable” as many skiers refer to it, was produced by Fatzer AG in Switzerland. Weighing more than 33 tons and measuring 54 millimeters in diameter, the COMPACTA rope comprises six compacted strands that provide optimal grip for the D-Line drive; reduce wear on rollers, clamps and sheaves; and increase fatigue life. 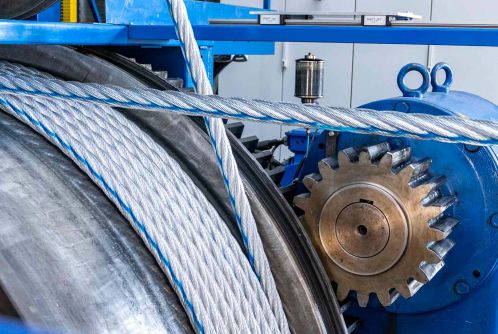 After the haul rope was set in place, it was spliced into an endless loop using Fatzer’s TRUsplice technology, an insert customized to cradle the strands of the rope and keep strand contact to a minimum. Chairs attach and detach from the rope at both ends of the lift, allowing for easier loading and unloading as the rope continues to move.

Ramcharger 8 also has spacious terminals, providing maintenance workers easier and safer access to components. Controls are simplified and labeled in a manner that makes the lift’s operation more intuitive than lifts of just a few years ago. According to Mike Unruh, the resort’s vice president of mountain operations, everyone from lift operators to lift maintenance technicians were able to quickly learn and adapt to the new control system, Doppelmayr Connect, which integrates touchscreen technology, dropdown menus and onscreen troubleshooting guidance. The system offers mechanical and electrical schematics at each terminal to help speed the learning process and troubleshooting activities. The system also allows Doppelmayr technicians and engineers to log into the lift at any hour of the day and from any location, including Austria.

The lift is easy to load, starting with the load gates, progressing onto the conveyor carpet and finishing at a load table that can be raised or lowered at the touch of a button. These features combine to help ensure a smooth, safe loading process that greatly reduces the likelihood of misloads. In addition to a manual option, the D-Line chair offers two other operating systems for the restraining bar: lock or autolock. Lock means that the bar is automatically locked after manual closure by the passengers and automatically released, then opened in the arrival station. In the case of autolock, the restraining bar closes and locks automatically. This operation also is monitored to ensure the restraining bar is closed when the carrier leaves the station. Here again, the restraining bar is automatically released and opened at the other end. Another practical feature of the new installation is the chair parking facility, which is fully automated.

Swift Current 6 and Ramcharger 8 are part of the resort’s Big Sky 2025 Plan, an ambitious 10-year capital plan aimed at transforming the small town of Big Sky and its big mountain ski terrain into a world-class, year-round mountain destination. A cornerstone of the transformative vision includes creating the most technologically advanced chairlift network in North America. Ramcharger 8 brings Big Sky another step closer to making that dream a reality.