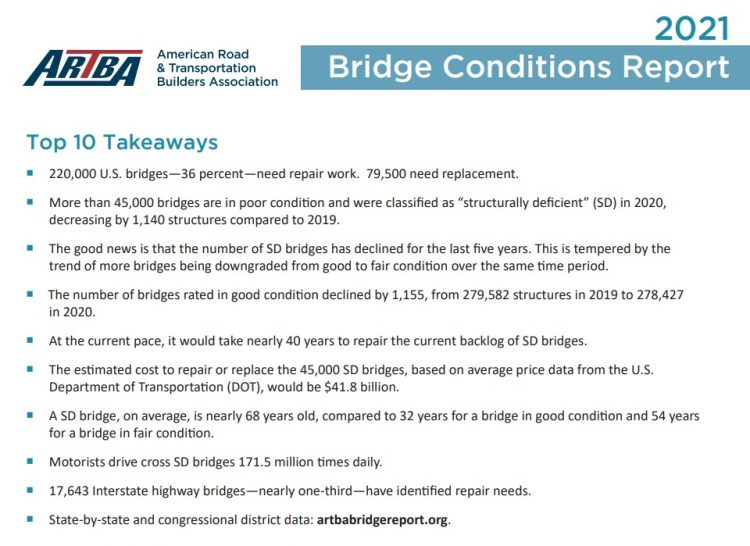 WASHINGTON — More than 220,000 U.S. bridges need major repair work or should be replaced, according to an American Road & Transportation Builders Association (ARTBA) analysis of the just released U.S. Department of Transportation’s 2020 National Bridge Inventory (NBI) database. That figure represents 36 percent, or more than one-third, of all U.S. bridges.

If placed end-to-end, the length of these bridges would stretch over 6,000 miles—long enough to travel across the country from Atlanta to Los Angeles, and continue up to Deadhorse, Alaska the furthest point north on the state’s highway system.

ARTBA finds that while the number of structurally deficient (SD) bridges declined 2.5 percent last year to 45,000, the number of bridges falling into fair condition grew more than 3,600 to almost 295,000.

The association’s report comes as the Biden Administration and Congress continue deliberations on a long-term transportation infrastructure investment package.

American drivers cross these SD structures more than 171 million times daily. The estimated cost to repair them is $41.8 billion, based on average cost data published by the U.S. DOT.

Of the 220,000 bridges needing repair, state and local government say that 79,500 bridges should be replaced totally, according to Black. Nearly one-third of Interstate highway bridges (17,643 spans) have identified repair needs.

Established in 1902 and with more than 8,000 public and private sector members, the Washington, D.C.-based ARTBA advocates for strong investment in transportation infrastructure to meet the public and business community demand for safe and efficient travel.