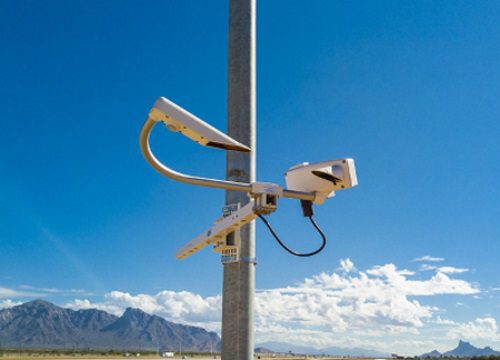 As reported by the AASHTO Journal: https://aashtojournal.org on March 22, 2021 - in News, Projects

The American Society of Civil Engineers recently added 13 federal, state, and local projects to its list of “Infrastructure Gamechangers,” so-called as they represent the “latest innovations in transportation, water, and energy infrastructure” – and are transforming the way engineers plan, build, and adapt to U.S. infrastructure needs.

[Above photo by the Arizona DOT.]

Four of those 13 are state department of transportation projects.

The first is the Arizona Department of Transportation’s $72 million I-10 Dust Detection and Dynamic Response System, developed to keep drivers safe through adverse conditions and put in place to mitigate the significant role dust storms play in crashes and fatalities along the I-10 stretch between Phoenix and Tucson.

That system combines a short-range dust gauge and a long-range weather radar dish to help detect dust storms from over 40 miles away – all feeding into a closed-circuit camera system. That allows the agency to determine when to dynamically slow highway speed limits and update message boards.

The second entails concrete sensors developed by Purdue University deployed by the Indiana Department of Transportation to better understand exactly how far along concrete is in the “maturation” process. By leaving the sensors within the concrete for an extended period, engineers can study the effectiveness of their work over time, as opposed to the conventional testing period of just 28 days. This also will communicate to Indiana DOT when concrete replacement is required.

The third highlights the use of small “robot boats” by the Michigan Department of Transportation to inspect “bridge scour” beyond what is usually possible during human dives.

Called EMILY – short for EMergency Integrated LanYard – these autonomous boats use cameras and sonar technology to investigate bridge scour before determining if a human diver needs to get in the water.

The final state DOT project is the Autonomous Impact Protection Vehicle or AIPV now undergoing tests by the North Dakota Department of Transportation to improve protection for construction crews in highway work zones.

In 2019, some 234 work zone-related crashes occurred on North Dakota highways, resulting in 64 injuries and 2 fatalities.

Usually operated by a human driver, the AIPV switches over to remote control when deployed in a work zone without any humans aboard to reduce potential risks.

With those 13 additions, ASCE said that 40 states are now home to a ‘Gamechanger’ that meets at least one of the following criteria: innovative technologies, creative funding mechanisms, trend-setting standards, and unique collaborations between agencies or private firms.