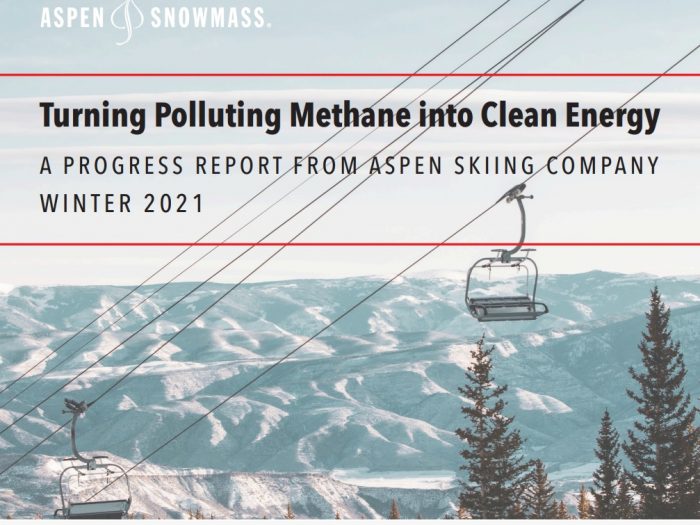 ASPEN SNOWMASS, Colo.  – Aspen Skiing Company (ASC) today released a report that tells the story of how ASC and its partners – Oxbow’s Elk Creek Mine, Holy Cross Energy, and Vessels Carbon Solutions – turned a coal mine in Somerset, Colorado into a clean-energy production facility. It also documents how much electricity has been generated since the project began, how much harmful methane has been destroyed, and how much revenue the project generates annually.

“We recognize global warming as an existential threat to our business,” said Matt Jones, ASC’s Chief Financial Officer, who worked with representatives of Oxbow to make this project happen. “We can’t stand by and wait for others to solve this crisis. We’re trying to do what we can to make a difference.”

By converting waste methane into energy, the Elk Creek Mine produces 3 megawatts of baseload power, which is as much energy as ASC uses annually at all four of its resorts, including hotels and restaurants. The electricity generated and the carbon offsets flow into the utility grid, not to ASC directly, greening the entire regional grid.

Since this project started, it has prevented the emission of 250 billion cubic feet of methane annually into the atmosphere – mitigating a huge problem when it comes to global warming. This is equivalent to removing 517,000 passenger vehicles from the road for a year.

On the financial front, this project produces between $100,000 and $150,000 in revenue per month from electricity and carbon credit sales to Holy Cross Energy. After nearly ten years, ASC has only about $750,000 remaining to pay off its initial investment of $5.34 million.

The project is significant because when released directly into the air, methane absorbs the sun’s heat and, according to the Intergovernmental Panel on Climate Change, has a warming potential 86 times that of carbon-dioxide. Scientists have shown that addressing global emissions of methane and soot could shave nearly one degree Fahrenheit off the warming projected by mid-century. Policy solutions are imperative, and the Biden Administration is working on new regulations. But this project shows that individual companies also have the power to make a difference.

To reduce its carbon footprint, ASC has been working on producing renewable energy for a long time. It was the first in the ski industry to build a solar array in 2004, followed by a micro-hydroelectric plant tied to their snowmaking system. The company then installed a 147-kilowatt solar array on the Colorado Rocky Mountain School campus in Carbondale in 2008. At the time, it was the largest solar array on Colorado’s Western Slope. However, none of these projects generated enough power in relation to ASC’s high-energy needs. The methane-to-electricity project was attractive because it had the potential to produce far more energy than the others.

“We have learned a lot from this project and will continue to work on developing innovative solutions to this global crisis,” said Jones.