/ Projects / Section of A14 to Become a Smart Road

Section of A14 to Become a Smart Road 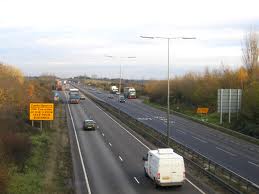 One of the country’s most congested highways, joining the busy container port at Felixstowe to Birmingham, is to become Britain’s first internet-connected road in a pilot project that could pave the way for everything from tolls to self-driving cars.

A network of sensors will be placed along a 50-mile stretch of the A14 in a collaboration between BT, the Department for Transport and the Cambridge start-up Neul, creating a smart road which can monitor traffic by sending signals to and from mobile phones in moving vehicles.

The technology, which sends signals over the white spaces between television channels instead of mobile phone networks, could even pave the way for systems to automatically control car speeds.

The telecoms watchdog Ofcom, which yesterday approved the project as part of its new blueprint for how Britain will use spectrum, is already forecasting what high technology traffic systems will look like.

“Sensors in cars and on the roads monitor the build-up of congestions and wirelessly send this information to a central traffic control system, which automatically imposes variable speed limits that smooth the flow of traffic,” Ofcom said. “This system could also communicate directly with cars, directing them along diverted routes to avoid the congestion and even managing their speed.”

Onboard computers could essentially override the driver, imposing maximum speeds on the vehicle by controlling the brakes and the engine. While the concept may sound futuristic, Google is already developing a computer-driven car, which uses cameras, radar, and range finders to detect obstacles and other vehicles.

The A14 project will not involve smart cars, but is a first step in building the infrastructure such vehicles will need. It could also lay the ground for charging motorists to use busy roads.

The Highways Agency is proposing a pounds 1.5bn improvement to the A14 which would be paid for by a toll, with lorries paying up to pounds 3 to use the improved route. The BT sensor project could help design the toll and the road improvements by gathering information on car drivers before moving on to collect information on heavy goods vehicles. The information will be sent back to a database to which the Department for Transport will have access.

“Understanding traffic patterns, in different weather conditions at different times of day, will allow changes to traffic regulation,” said Stan Boland, chief executive of Neul. “In the future it might provide data that could be used for road pricing, vehicle tracking, and breakdown.”

While traffic data is already gathered by companies such as the satnav maker TomTom, using mobile phone networks, the A14 project offers a low-cost alternative. Instead of relying on mobile masts, which costs tens of thousands to install, Neul will use small base stations that cost a few pounds and can be fixed to the outside of nearby BT exchanges.