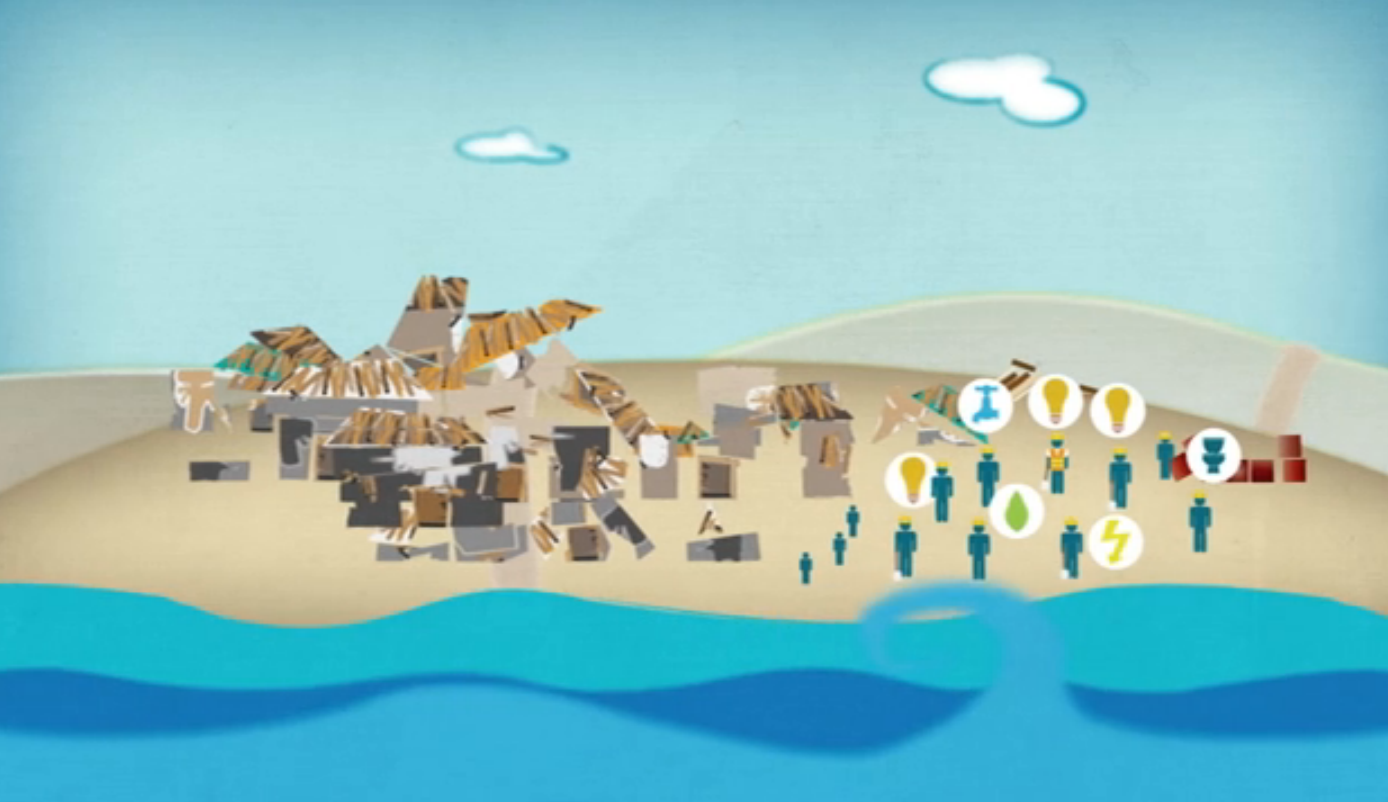 Former President Bill Clinton announced today a global commitment to the 100 Resilient Cities Centennial Challenge during the opening plenary of the 2013 Clinton Global Initiative (CGI). The Commitment to Action, led by The Rockefeller Foundation named Architecture for Humanity as a partner as well as Swiss Re, the American Institute of Architects (AIA), and Palantir. The program will support at least 100 cities to hire a Chief Resilience Officer (CRO), create a resilience strategy, and provide access to tools, technical support, and resources for implementation, including access to innovative financing for infrastructure development. 100 Resilient Cities will also create a network for CROs to share information and best practices.

The commitment will be realized through a new 501(c)3 institution, 100 Resilient Cities – pioneered by The Rockefeller Foundation, will coordinate both the network of cities as well as the platform of services offered to network members. Swiss Re, Architecture for Humanity, the American Institute of Architects, and Palantir have made the first commitments for these services.

Architecture for Humanity has 15 years of expertise working in reconstruction and resiliency. Led by Eric Cesal, Director of the Reconstruction and Resiliency Studio, the design non-profit has responded to 15 natural and man-made disasters, completed over 300 projects in 47 countries, expanded to 63 chapters across the world, and has nurtured a network of more than 75,000 architects, professionals and volunteers committed to making a positive impact through architecture.

“The significance of our work is that we build things, which provides us the opportunity to learn what works and contribute that to this partnership. I believe we will see the positive impact of this program in building practices, disaster mitigation and economic development. This is a pivotal moment in resiliency and we applaud the Rockefeller Foundation for making this monumental commitment, ” says Sherry-Lea Bloodworth Botop, Director of Strategic Development, Architecture for Humanity.

By 2050, 75% of the world’s population will live in cities– the 100 Resilient Cities commitment partners see building urban resilience as an imperative of the 21st Century. Shocks and stresses, whether caused by extreme weather related to climate change, seismic events or terrorism– affect cities on a larger scale due to population density, often with tragic results. But through proactive planning, foresight and better investment, cities can mitigate these impacts.

“This commitment represents a sea change in the scope and approach that the non-profit community holds towards disaster. Rockefeller and its partners are addressing disaster before it happens. By making such a commitment, the partnership will be saving lives and property throughout the globe and demonstrating the leadership that will be necessary to ensure a stronger urban future,” adds Eric Cesal, Director, Reconstruction and Resiliency Studio, Architecture for Humanity.

Architecture for Humanity will work with the American Institute of Architects, Public Architecture and others to provide expertise in support of the 100 Resilient Cities program. In its role, Architecture for Humanity will execute community engagement and planning services, laying the groundwork needed to prepare each city to work with the Chief Resiliency Officers. In addition, the non profit will open five domestic Regional Resiliency Design Studios to serve as working hubs to help implement resiliency projects.

Supported through a $100 million pledge to build urban resilience from the Rockefeller Foundation, the 100 Resilient Cities network will grow to include at least 100 cities from around the world. As more cities join or express interest through future rounds of applications, and as more private entities follow the lead of Swiss Re, Architecture for Humanity, the American Institute of Architects, and Palantir, the potential to change the future of city planning globally will become increasingly powerful and real.

100 Resilient Cities will select the first round of 20 cities to join the network following the Challenge process, upon the recommendations of a panel of esteemed judges. Cities from around the world were invited to apply by The Rockefeller Foundation. To date, more than 500 cities have participated in the application process. Selected first round cities will be announced on December 3, 2013 at The Rockefeller Foundation’s annual Innovation Forum.

About the Clinton Global Initiative
Established in 2005 by President Bill Clinton, the Clinton Global Initiative (CGI), an initiative of Bill, Hillary & Chelsea Clinton Foundation, convenes global leaders to create and implement innovative solutions to the world’s most pressing challenges. CGI Annual Meetings have brought together more than 150 heads of state, 20 Nobel Prize laureates, and hundreds of leading CEOs, heads of foundations and NGOs, major philanthropists, and members of the media. To date CGI members have made more than 2,300 commitments, which are already improving the lives of more than 400 million people in over 180 countries. When fully funded and implemented, these commitments will be valued at $73.5 billion.

CGI also convenes CGI America, a meeting focused on collaborative solutions to economic recovery in the United States, and CGI University (CGI U), which brings together undergraduate and graduate students to address pressing challenges in their community or around the world, and, this year, CGI Latin America, which will bring together Latin American leaders to identify, harness, and strengthen ways to improve the livelihoods of people in Latin America and around the world. For more information, visit clintonglobalinitiative.org