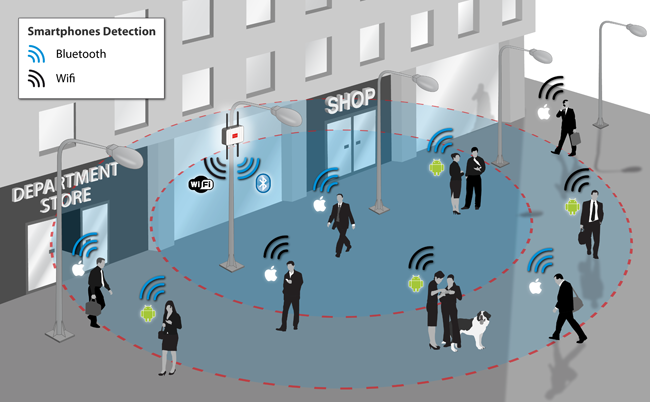 Detecting how many people or vehicles are in a certain place is a difficult task that in the past has been addressed by using expensive and limited video camera image analysis; now with the Smartphone expansion everybody has a mobile device with Wifi or Bluetooth radios on it, and these wireless interfaces can be detected with the new sensing technology developed by Libelium and integrated inside Meshlium Xtreme -the company’s multiprotocol router.

Applications of this new technology go from street activity measurement to vehicle traffic management. Now it is possible to monitor the number of people passing daily in a street, the average time of the stance at landmarks, like shopping windows, and even differentiate between residents (daily matches) and visitors (sporadic matches).

“This new technology allows to detect both iPhone and Android devices without the need of a specific application installed on them” explains Libelium’s CTO, David Gascón. “Meshlium Xtreme detects the “hello!” messages periodically sent by the Smartphones without the need of user interaction and always ensuring their privacy, since these messages do not identify their owners” he adds.

Regarding Vehicle Traffic Monitoring the system lets know in real time the flow of traffic in highways and roads, monitoring also the average time of vehicle stance for traffic congestion prevention. With this information, automatic diversion messages can be delivered to drivers.

Information collected from each mobile phone contains a unique identification address (MAC) -that allows to unequivocally identify the Smartphone-, the quality of the signal (RSSI) -which gives the distance the user is from our scanning point- and the Class of Device and Vendor which allow us to differentiate among pedestrians and vehicles. The anonymous nature of this technique is due to the use of MAC addresses as identifiers which are not associated with any specific user account or mobile phone number not even to any specific vehicle.

The new Smartphone detection capability is integrated in Meshlium Xtreme – the wireless sensor network gateway designed by Libelium – which may also be acquired with ZigBee and 3G connectivity options for the interaction with autonomous sensors nodes to provide complete services to Smart Cities.