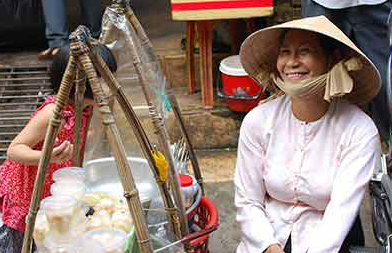 Directed by SA+P’s Annette Kim, SLAB pursues the practice of mapping as a way to ground our understanding of how space is socially contested, negotiated and constructed; to chart the connections between the built environment, social institutions and human experience; and to propose new narratives and interventions.

The work in this exhibit focuses on the sidewalks of Ho Chi Minh City, perhaps the city’s most important and most overlooked public space – so narrow that they require intimate, local negotiations and yet so vast and networked they hold great potential for bringing people together in a humane and civic society. But despite their role as the major space by which people experience Ho Chi Minh City, the sidewalks disappear in conventional cartography.

SLAB’s new mapping systems seek to celebrate and legitimize the sidewalk life of the city. Based on street vendor interviews, physical survey, policy analysis, photography, historical records and tourism study, the maps explore what the city’s sidewalk life does and what it contributes to urban life, an effort that bridges urban design and social science research while also aiming to make a practical intervention in the city’s landscape.

Kim lived in Ho Chi Minh City as a Fulbright scholar in 1999-2000 and in Hanoi in 1997. She has published numerous articles about urban development in Vietnam and a book entitled Learning to be Capitalists: entrepreneurs in Vietnam’s transition economy (Oxford, 2008). Her next book, Sidewalk City: Re-Mapping Public Space in Ho Chi Minh City, is slated to be published in 2014 by the University of Chicago Press.

After it closes in November, Sidewalk City will travel to Ho Chi Minh City’s main exhibition space to see how art interacts with public debates about street vendors in a non-participatory urban planning system.