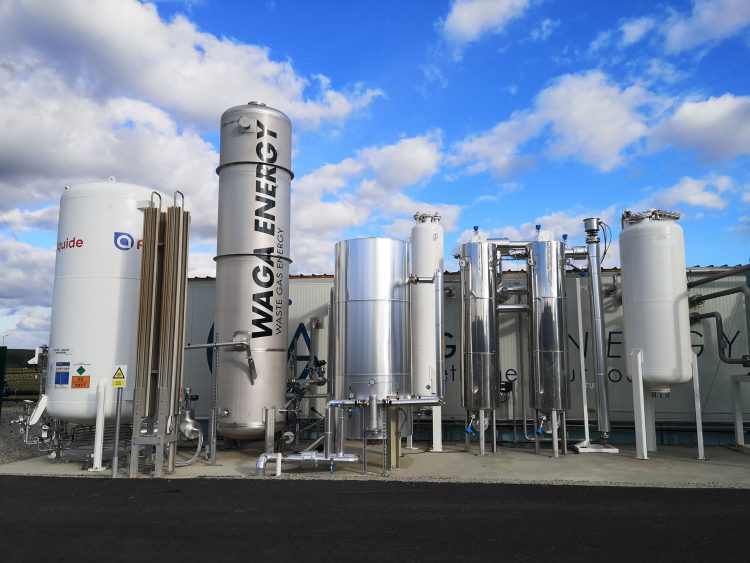 The Ferrovial Servicios group, a leading global service operator, has selected Waga Energy to produce biomethane at the Can Mata landfill, one of Spain’s largest landfill, near Barcelona. The Can Mata site will be the first in Spain to use the WAGABOX® purification technology, developed by Waga Energy to recover landfill gas in the form of biomethane, a renewable substitute for natural gas.

The WAGABOX® unit at the Can Mata site will be commissioned in 2022. It will treat up to 2,200 m3/h of landfill gas and inject 70 GWh of biomethane per year into the gas network of the Spanish operator Nedgia, which is equivalent to the annual energy consumption of 14,000 Spanish households or a fleet of 200 lorries. The project will avoid the emission of 17,000 tonnes of CO2 per year by substituting renewable gas for natural gas.

One of the first PPAs in Europe for green gas

This is the first ever landfill gas injection project to be financed by a long-term power purchase agreement in Europe. This method of financing is common for renewable electricity projects, but rarely used for green gas projects, generally unable to provide buyers with a competitive price over the long term. This first-ever “Biomethane Purchase Agreement” has been made possible thanks to the proven efficiency of the WAGABOX® technology, combined to Waga Energy’s unique expertise in the management of landfill biogas injection projects, and Ferrovial Servicios’ experience of more than 50 years in the treatment and recovery of waste.

The two partners have adopted a business model that guarantees high performance throughout the project cycle. Waga Energy will purchase part of the landfill gas from the Can Mata site from Ferrovial Servicios, finance the construction and operation of the WAGABOX® unit, as well as manage relations with the gas network operator and the sale of the biomethane. Waga Energy will invest 7.5 million euros to commission the unit and connect the Can Mata site to the Nedgia gas grid, located four kilometers away.

Can Mata is one of the most important waste storage sites in Spain. It produces more than 40 million cubic meters of raw biogas per year, which has so far been used in the form of electricity and fuel to power a ceramic factory. The WAGABOX® unit will greatly increase energy yields. Combining membrane filtration and cryogenic distillation, the WAGABOX® technology separates the methane contained in landfill gas for direct injection into gas grids. Ten units are already in operation in France, supplying 35,000 homes and avoiding 45,000 tons of CO2 emissions per year.

Antonio Aliana, Regional Director of Ferrovial Servicios in Catalonia, said: “The agreement signed with Waga Energy strengthens Ferrovial’s commitment to sustainable development. This circular economy project will make it possible to produce biomethane, for the benefit of our citizens, thanks to the most advanced technology for the recovery of biogas from waste gas. We hope that this innovative green energy project will be extended to other sites that we operate, as part of our strategy to transform waste into resources”.

Mathieu Lefebvre, CEO and co-founder of Waga Energy, concluded: “This significant project with the Ferrovial Servicios group marks the culmination of three years of hard work by both parties. Landfill gas-to-biomethane injection projects are complex from a technological, regulatory, and financial point of view. Our unique expertise in this area, combined to our commitment to the energy transition, have enabled this major renewable gas project in Spain to materialize. ”

About Can Mata: one of the main landfill sites in SpainThe Can Mata landfill site is one of the largest in Spain. It covers 68 hectares in the municipality of Els Hostalets de Pierola, about 40 kilometers from Barcelona. Ferrovial Servicios has operated the site for the last 20 years, treating more than 20 million tons of waste.  The waste stored in Can Mata generates nearly 40 million cubic meters of biogas per year. This biogas has so far been used to provide electricity and fuel for a neighboring ceramic factory. Ferrovial Servicios processes more than one million tons of waste per year at several sites. The company has developed expertise in the production of biomethane by deploying a project to purify biogas from urban waste based on the use of digesters at its Valdemingómez site, which is then marketed directly.  About WAGABOX®: a breakthrough technology for the recovery of landfill biogas WAGABOX® is a breakthrough technology for the recovery of landfill gas in the form of biomethane injected into natural gas grids. This innovative technology is the result of 10 years of research & development and benefitted from the active support of French industry giant Air Liquide. Combining membrane filtration and cryogenic distillation, it guarantees a higher energy yield than solutions based on electricity production, and optimum use of the resource, without operational constraints for the landfill operator. Alternative technologies, mainly used for the purification of biogas from methanization, are unable to treat this specific biogas, due to the high air content.

About Ferrovial ServiciosInternational reference in the design, maintenance, operation and comprehensive management of public and private infrastructure in the field of transport, environment, energy, health, industry and facilities management. With over 30 years of experience and more than 70,000 employees, Ferrovial Servicios offers cutting-edge services in the areas of consulting, waste treatment, energy efficiency and urban mobility. About Waga EnergyWaga Energy is an innovative French company committed to the fight against climate change. Created in 2015 in the Grenoble region, it is rolling out a unique purification technology which combines membrane filtration and cryogenic distillation, to recover landfill gas in the form of biomethane. Waga Energy finances, builds and operates its purification units, called WAGABOX®, as part of long-term partnerships with landfill operators, and generates income through the sale of biomethane.