To get a copy of the report, visit: https://mercomcapital.com/product/2020-q4-annual-funding-ma-report-storage-grid-efficiency

Total corporate funding (including venture capital funding, public market, and debt financing) for the Battery Storage, Smart Grid, and Energy Efficiency sectors in 2020 was up by 112%, with $8.1 billion compared to $3.8 billion in 2019. 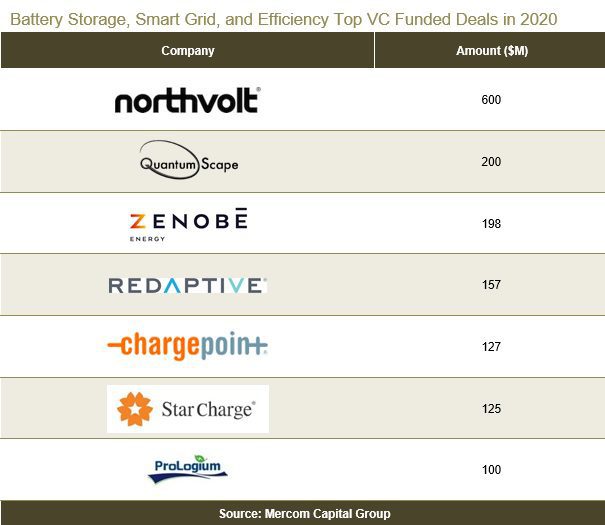 105 VC investors participated in Battery Storage deals in 2020 compared to 78 in 2019. Breakthrough Energy Ventures was the top investor in 2020. Utilities and oil and gas companies were involved in four battery storage funding deals in 2020.

There were 19 M&A transactions in the Battery Storage category in 2020, of which two disclosed transaction amounts.

A total of 24 battery storage and solar plus storage M&A transactions were announced in 2020 compared to 11 in 2019.

The top VC funded companies in 2020 were: ChargePoint, which brought in $127 million; Star Charge, which received $125 million; Tibber, which secured $65 million; SmartRent with $60 million; and Probus Smart Things with $53 million.

A total of 102 investors funded Smart Grid companies in 2020, compared to 78 in 2019. The top VC investors in 2020 were Congruent Ventures, Energy Impact Partners, National Grid Partners, and Silicon Valley Bank.

The top VC funded companies in 2020 were: Redaptive, which raised $157 million; followed by Palmetto with $29 million; Juganu with $18 million; Infogrid with $16 million; and Eta Compute with $13 million.

A total of 52 investors participated in funding deals in 2019 compared to 38 investors in 2019. Evergy Ventures was the most active investor in 2020.

In 2020, debt and public market financing announced by Energy Efficiency companies rose to $500 million in one deal compared to $371 million in three deals in 2019.

To get a copy of the report, visit: https://mercomcapital.com/product/2020-q4-annual-funding-ma-report-storage-grid-efficiency