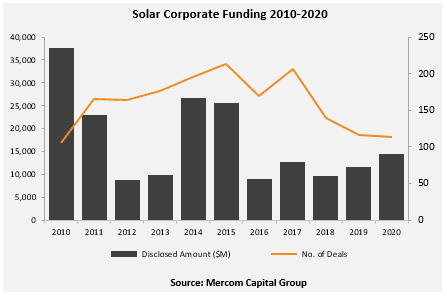 Mercom Capital Group, llc, a global clean energy communications and consulting firm, released its annual report on funding and merger and acquisition (M&A) activity for the solar sector in 2020.

“Following a tough first half when corporate funding was down 25% year-over-year, recovery has been swift and broad, with corporate funding up 24% for the year. Publicly-traded solar companies had an unprecedented year. The solar ETF was up 225%, with 15 solar stocks up over 100% in 2020. Public market funding was also up with the help of several IPOs, and debt financing was up on the back of securitization deals. Solar asset acquisitions were at an all-time high in a pandemic year and have become even more sought-after as an investment haven, especially in the uncertain COVID economy,” said Raj Prabhu, CEO of Mercom Capital Group.

There were 102 VC and PE investors that participated in funding deals in 2020, with five involved in multiple rounds.

In 2020, announced debt financing came to $8.3 billion, a 6.4% increase YoY. Eight securitization deals totaling $2.2 billion were recorded in 2020, which was the largest amount of financing through securitization in a year.

Sixty-two (62) Merger and Acquisition (M&A) deals were transacted in the solar sector in 2020 compared to 65 in 2019. Most of the transactions involved Solar Downstream companies. The largest transaction in 2020 was Sunrun’s acquisition of Vivint Solar, in an all-stock transaction for $3.2 billion.

A record 39.5 GW of large-scale solar projects changed hands in 2020 compared to 26.1 GW in 2019. This was the largest amount of projects acquired in a single year to date.

375 companies and investors are covered in this 127-page report, which contains 102 charts, graphs, and tables.