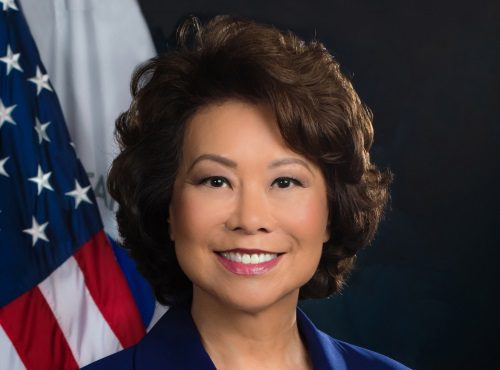 As reported by the AASHTO Journal: https://aashtojournal.org on January 11, 2021 - in News, People

Elaine Chao (above) stepped down as U.S. Department of Transportation Secretary on January 7, with her resignation to take effect January 11, due to the Capitol Hill riot that occurred on January 6.

“Our country experienced a traumatic and entirely avoidable event as supporters of the President stormed the Capitol building following a rally he addressed,” Sec. Chao explained in a January 7 email to USDOT staff. “As I’m sure is the case with many of you, it has deeply troubled me in a way that I simply cannot set aside.”

The secretary added in her email that she is “hopeful many of you [in the USDOT] will carry forward our vision to improve the lives of Americans through this department and beyond” and hoped they would “help my announced successor Mayor Pete Buttigieg” take on the responsibility of “running this wonderful department.”

Chao – who is married to Sen. Mitch McConnell (R), now the Senate’s minority leader – was the 18th USDOT secretary and the second woman to hold that position. She previously served as U.S. Secretary of Labor under President George W. Bush.