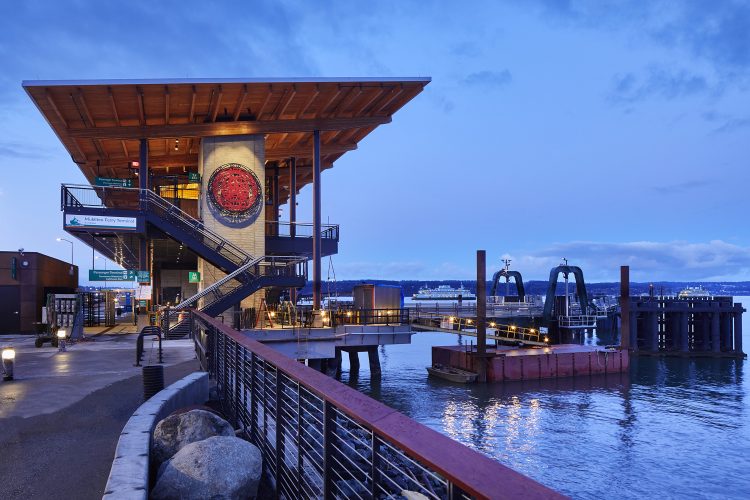 Inspired by the form of a tribal longhouse built and used by the region’s Coast Salish tribes, the ferry terminal building is a composition of glass, concrete, and timber, and provides critical safety and efficiency improvements to the West Coast’s busiest ferry route for vehicles. The development is the state’s first new ferry terminal in 40 years and is part of a larger $187 million replacement project that improves regional mobility, incorporates the cultural influence of the Pacific Northwest’s native people, and includes sustainable elements that demonstrate the state’s commitment to environmental stewardship.

Seattle, Jan. 04, 2021 – LMN Architects is pleased to celebrate the opening of the Mukilteo Multimodal Ferry Terminal in Mukilteo, Washington. With input from local tribes, the two-story terminal building, designed in partnership with KPFF Consulting Engineers, replaces the existing terminal built in 1957 and adheres to contemporary environmental and building standards.

Charlie Torres, Mukilteo Design Project Manager at WSF, comments: “We listened intently and realized our project had to tell a story, one that had been partially hidden from the general public for years and covered under a Cold War fueling tank farm and a pioneer lumbermill before that. The group of designers asked to bring the project together embraced the goal of designing a new ferry terminal that honored and respected the history and values of the Coast Salish people. While only a transportation facility, it owes a debt to the generations of people who occupied this beautiful piece of land along the Salish Sea thousands of years before our time. The project is light on the earth and wrapped in cedar”.

Howard Fitzpatrick, Principal, LMN Architects, comments: “The Mukilteo Multimodal Ferry Terminal is the result of an intensive collaboration between the design, engineering, and contracting teams. But it would not have been possible without the inspiration and sense of mission that the team drew from our tribal partners. The historic significance of the site to the tribes, combined with its incredible natural beauty, inspired the team to produce a project that is imbued with a deep sense of history, while at the same time recognizing the vitality and forward-looking orientation of the area’s original inhabitants.”

The building’s longhouse form, derived through a close collaboration with numerous Coast Salish tribes, enriches the passenger experience, streamlining circulation and managing large patron flows with intuitive wayfinding. Vertical transportation cores with elevators and stairs at each end of the structure lead to a linear promenade at the upper level, from which entries to the ticketing and waiting area are visible.

Phillip Narte, WSF Tribal Liaison, comments: “The Ferry Terminal has been the most challenging project I have been involved in due in part to the collaboration with 11 tribal governments, and the associated cultural and historical issues. I believe the project will become a model for how local, state, and tribal governments can work together. The Mukilteo Multimodal Ferry Terminal is the most rewarding and satisfying project that I will ever work on.”

The waiting room is a daylight-filled space with views to land and sea that help orient ferry riders. Tribal cultural motifs created by local, Native American artists James Madison and Joe Gobin are displayed throughout the building, creating a welcoming atmosphere of regional belonging. In conjunction with the terminal, a new waterfront promenade connects a path from downtown Mukilteo, through the terminal and on to the beach, creating an elevated pathway for public use.

Andrew Bennett, Principal, KPFF Consulting Engineers, comments: “The Mukilteo Multimodal Ferry Terminal has been an amazing opportunity to contribute to our regional transportation system.  It was an exceptionally complicated project and KPFF was fortunate to have visionaries like LMN on our team.  We were able to work with literally dozens of stakeholders, firms, and government agencies to deliver this project.  Everyone can be proud of what we’ve accomplished, and we hope this terminal continues to be a valuable public asset for years to come.”

LMN Architects worked closely with the Coast Salish tribes, whose traditional fishing rights encompass the area’s coastal waters, to incorporate environmental stewardship into the overall concept. The project’s strong sustainability ambitions started with repurposing the brownfield site, which previously housed a U.S. Air Force Cold War fuel depot and pier. Removing the pier eliminated approximately 10 percent of the Puget Sound’s remaining toxic creosote piles. The structural expression combines advanced energy and water conservation, and the longhouse-style shed roof allows for a full array of photovoltaic panels, meaning the facility can return energy to the grid. The roof canopy is made from cross-laminated timber, sustainably harvested and locally sourced. Heating and cooling the concrete-slab main floor with electric heat pumps efficiently provides interior comfort year-round. A rack-and-pinion window system automatically opens and closes in response to changing conditions, optimizing airflow and comfort. The vehicle holding area features pervious concrete that collects stormwater and filters it through layers of sand before it enters the Possession Sound. Other advanced stormwater treatment systems are used throughout the terminal site.

Howard Fitzpatrick, Principal, LMN Architects, comments: “The design team took the responsibility of building on such a historically significant and sacred site very seriously. While it is impossible to construct a modern facility without impacting the site, our goal was to minimize those impacts, to work with the sun, rain, wind and views that have always defined this coastline to make a building that respects both its site and the culture that has occupied it for thousands of years.”

The Mukilteo Multimodal Ferry Terminal provides a flexible asset for the community while creating a major new transportation hub that alleviates congestion and provides a new connection to public transit. The new terminal improves numerous shortcomings of the existing 63-year old facility while looking to the future with a sustainable approach serving the Pacific Northwest’s rapidly evolving transportation needs.

Walt Niehoff, Partner, LMN Architects, comments: “When we began the design, we were conscious of the transportation and infrastructure needs, but more importantly the rich history of the project and site. LMN and our team of consultants set out to create a welcoming civic space and a terminal for the new century. In addition to providing much-needed infrastructure improvements for the Mukilteo-Clinton route, the building celebrates the nature around the site, meets modern accessibility requirements, and improves both passenger safety and circulation. The Mukilteo Multimodal Ferry Terminal is the first new ferry terminal built in 40 years in the state of Washington, and we are extremely proud to be a part of this effort to help improve public infrastructure in the Pacific Northwest.”

The new terminal officially opened at 5:50 p.m. on December 29, upon arrival of the 5:35 p.m. departure out of Clinton. That sailing marked the end of an 18-hour closure of the route to move floating marine structures from the old terminal to the new one. Because of COVID-19 restrictions on large gatherings, there was no grand opening ceremony.

LMN Architects is recipient of the 2016 AIA National Architecture Firm Award and is widely recognized for its design of projects that support smart, sustainable cities. The firm has successfully completed more than 700 projects across North America, including the double LEED Platinum Vancouver Convention Centre West in Vancouver, Canada; Cleveland Convention Center & Civic Core in Cleveland, Ohio; Tobin Center for the Performing Arts in San Antonio, Texas; and the Voxman Music Building at the University of Iowa in Iowa City, Iowa. The firm’s ongoing dedication to communities at all scales is underscored by its design approach, creating environments that elevate the social experience.

About LMN Architects
Since its founding in 1979, LMN Architects has dedicated its practice to the health and vitality of communities of all scales. Internationally recognized for the planning and design of environments that elevate the social experience, the firm works across a diversity of project typologies, including higher education facilities, science and technology, civic and cultural projects, conference and convention centers, urban mixed-use and transportation.

LMN has successfully completed over 700 projects across North America, including the Voxman Music Building at the University of Iowa in Iowa City, Iowa; Tobin Center for the Performing Arts in San Antonio, Texas; Vancouver Convention Centre West in Vancouver, Canada; Sound Transit University of Washington Station in Seattle, Washington; and the new Seattle Asian Art Museum.

For more information on the work of LMN Architects, please visit lmnarchitects.com