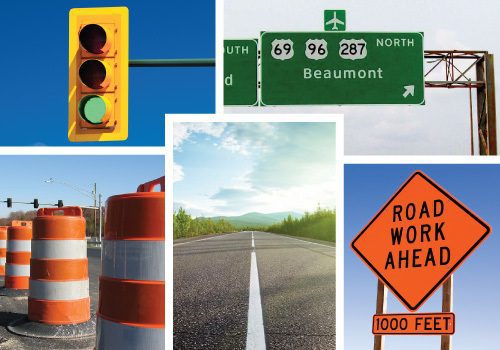 As reported by the AASHTO Journal: https://aashtojournal.org on December 15, 2020 - in News, Transportation

The Federal Highway Administration plans to propose 600 changes to the Manual on Uniform Traffic Control Devices for Streets and Highways or MUTCD via a notice of proposed amendments or NPA scheduled for release on December 14.

[Above photo collage by the American Traffic Safety Services Association.]

This is the first comprehensive update in more than 10 years to advance traffic operations and safety in states and cities nationwide, the FHWA said.

“The proposed updates to the manual smartly envision the future of transportation by considering the preparedness of our nation’s highways for automated vehicles,” noted Nicole Nason, FHWA’s administrator, in a statement. “They also renew attention on safety for our most vulnerable road users, including the nation’s highway workers, emergency responders, cyclists, and pedestrians.”

The agency added that the MUTCD serves as the national standard for traffic signs, signals, and pavement markings for America’s streets and highways.

“This document sets the standard for uniformity throughout the nation,” noted Eric Perry, director of innovation and technical services for the American Traffic Safety Services Association in a 2019 blog post. “We’re trying to help promote uniformity across … U.S. roadways so that we can focus on our mission which is to keep everyone safer and work toward zero deaths.”

The FHWA noted that the NPA represents a comprehensive update to the MUTCD, incorporating the results of over 150 official experiments with new traffic control devices and applications, along with official interpretations, interim approvals, and other research conducted both independently and by the Traffic Control Device Consortium Pooled Fund, which includes 26 state departments of transportation.

Among other improvements, the proposed updates reflect state-of-the-art traffic research to help transportation agencies prepare for automated vehicles and other cutting-edge technologies.

Features for vulnerable road users include the rectangular rapid-flashing beacon, expanded traffic signal warrants, and an array of roadway treatments for cyclists – many proven via the “experimentation process” defined in the MUTCD.

The MUTCD revision will also incorporate accommodations for automated vehicles, while affording states and local communities more innovation opportunities with traffic control systems – changes the FHWA alluded to in 2018.

Those improvements include congestion-reduction strategies such as variable speed limits, dynamic lane control and shoulder use and pedestrian safety enhancements such as the rectangular rapid-flashing beacon and crosswalk marking patterns.