/ Corporate / Autodesk Uses their Tools to Visualize the Hyperloop

Autodesk Uses their Tools to Visualize the Hyperloop

Jordan Brandt, technology futurist at Autodesk, came up with a concept proposal for how the Hyperloop could be built, taking advantage of the expertise of his many colleagues and using Autodesk software. The concept of the Hyperloop, a high-speed intra-city transporter that uses low-pressure tubes with capsules suspended on a cushion of air, comes from noted entrepreneur Elon Musk, who got his start with Paypal, and is founder and CEO of both Space-X and Tesla Motors. With all of his obligations, Musk shared his design ideas and has spurred others to weigh in on the concept, stating that he doesn’t have the time to pursue the concept himself.

The bulk of the plans that Musk has shared deal with the design of the capsules as well as the propulsion mechanism for the people-sized pods, and discussions of the route and feasibility as compared with a planned high-speed train between Los Angeles and San Francisco. The design of the tube infrastructure is something that Brandt felt wasn’t getting the same level of creative engineering attention as some of the other components.

“Infrastructure is often overlooked as not quite as sexy as some of the other components,” said Brandt. “We have a lot of infrastructure expertise at Autodesk, so I dove into the aspect of how the tubes might be made.”

Brandt came up with the idea of a continuously braided, carbon reinforced structure. Composites are becoming a standard building component, although to date they have only been manufactured at widths of a few feet in diameter. The idea of a long tube manufactured in place deals with the need to maintain pressure in the tube, as there are no seams, and also has benefits of quick construction that doesn’t have to deal with delivery disruptions that would result from segments of tube having to be transported to the job site. Additionally, manufacturing in place would help offset the higher costs of the carbon-fiber materials that are currently more expensive than steel.

Autodesk’s Hyperloop concept includes the seamless manufacture of threaded reinforced polymer, a material that has been used to reinforce bridges, but not yet used at this scale.

“We’re anticipating a lower cost than steel when you factor in the fabrication time saved, and the lower shipping costs,” said Brandt. “Essentially, once you start this machine, it’s a continuous process that proceeds slowly but steadily.”

Further benefits of this design are its vertical orientation, with the central stitching that makes two tubes from one continuous process. With this vertical orientation, there is better structural depth to the tube, which allows it to span longer distances between the individual piers that hold it up. Given California’s seismic activity, earthquake mitigation is an important factor, with the reduced number of seams and joints in this design greatly improving its performance. 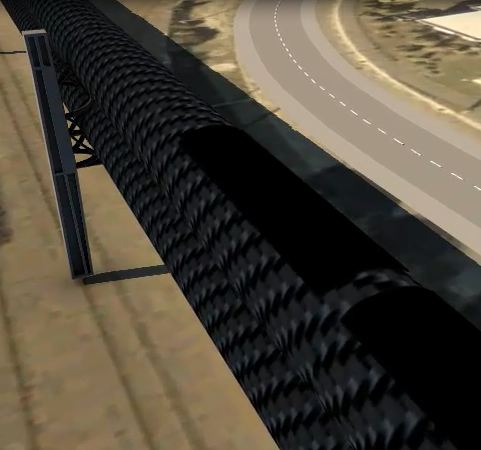 This rendering details the carbon-fiber materials as well as the integrated solar power generation that is part of Musk’s concept.

“Autodesk has a composites analysis technology, from the acquisition of Firehole Technologies a little more than a year ago,” said Brandt. “We have a whole team of composites structural experts that have calculated the seismic performance and optimal spans. One great thing about working at Autodesk is that not only do we have all this great technology, but we also have the knowledge of all the people behind the products. It’s great to be able to tap the engineering knowledge about structural components to the composites analysis, to even providing detailed renderings of our concept.”

The original braided tube concept design was modeled in Fusion 360 (an Autodesk cloud modeling tool for mechanical design and collaboration), InfraWorks 360 Pro provided the macro view of how the hyperloop would be routed, and the renderings were done in 3DS Max. A team is starting to look at the braiding machine with a more detailed mechanical model, and completing that work within Autodesk Inventor.

Additional work on the feasibility of this concept will include the modeling of the potential impacts, including the personal experience with simulations of the capsule traveling through the tube that takes advantage of Autodesk’s  multi-physics simulators. InfraWorks 360 Pro will be further deployed for routing optimization and traffic flow analysis, summarizing the amount of land that needs to be acquired, and the best routing.

This rendering of the Hyperloop running in a highway median was modeled using Autodesk’s InfraWorks 360 Pro software.

“The concept of tube travel isn’t new, but what Elon has proposed is a low-pressure system that doesn’t require a vacuum, making it less costly and easier to maintain,” said Brandt. “With this braided and seamless system, it will be interesting to simulate whether we can reduce the pressure or even make it feasible to hold a vacuum in the tube.”

Autodesk has been excited to work on such a far-reaching project, to both test the power of their tools, and to explore an idea so novel that has been made available to the public. Be certain to weigh in with feedback and ideas via our comments section.

“In the spirit of what Elon has done, help us make it better,” concluded Brandt.

The video below shows the use of InfraWorks 360 Pro to visualize the Hyperloop tube spanning a stretch of California.