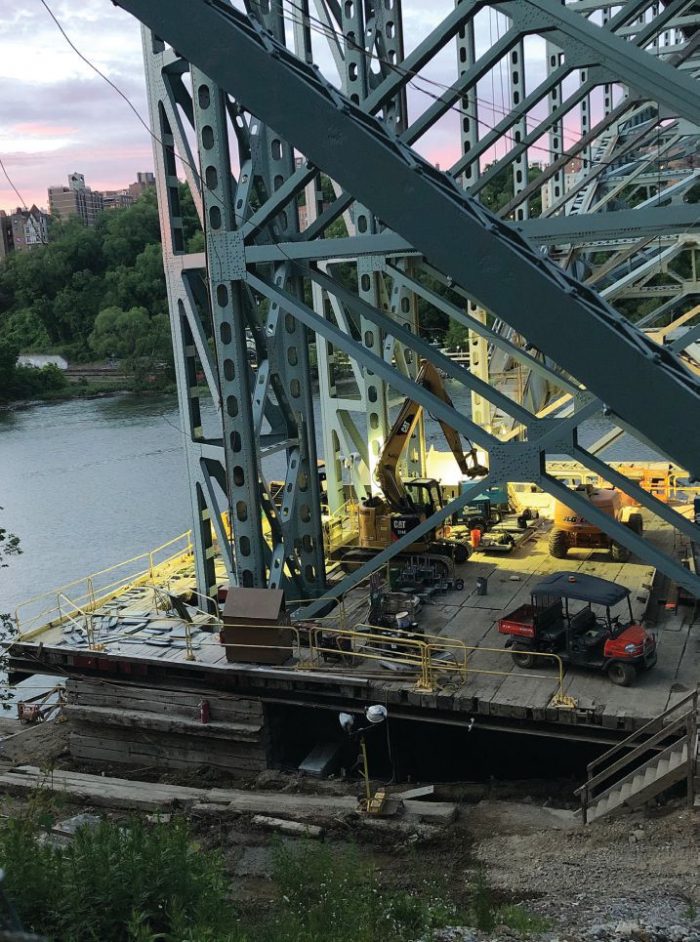 Nagesh Goel, co-founder and president of Atlas Evaluation & Inspection Services (AEIS)—a leading testing, inspection and certification company based in South Plainfield, N.J.—has been involved in testing more than a dozen of the area’s most notable bridges. But his company’s work with the newly constructed Governor Mario M. Cuomo Bridge in New York City—and its massive size—set this project apart.

The new $3.98 billion 3.1-mile twin-span bridge features eight traffic lanes with shoulders, dedicated bus and emergency vehicle lanes, and one of the longest bike and pedestrian bridge paths of its kind. Designed for a 100-year lifespan, the Governor Mario M. Cuomo Bridge features a cable-stayed span design and crosses one of the widest areas of the Hudson River, connecting Rockland and Westchester counties.

It measures 183 feet wide (total of both decks) and 419 feet high. Its longest span is 1,200 feet. The bridge has unlimited clearance above and 139 feet of clearance below.

It replaces the Tappan Zee Bridge, a cantilever bridge constructed in 1955 and designed for a 50-year lifespan. It took on more traffic than its designed capacity and by the 2000s was considered decayed and overburdened, requiring more maintenance.

Parts of the new bridge opened to traffic in late 2017 while Tappan Zee Constructors then began demolishing the old bridge to the south. The Governor Mario M. Cuomo Bridge officially opened during September 2018.

Construction on the Governor Mario M. Cuomo Bridge began in 2013. AEIS began its work in 2014 and completed most of it in December 2017, although tests will continue through 2020. The massive project also entailed the Left Coast Lifter—one of the world’s largest cranes—to install groups of pre-assembled girders one full span at a time.

Goel’s team partnered with The LiRo Group and the Governor Mario M. Cuomo Bridge project teams to complete bridge testing and inspection. The only thing that’s routine about this project, however, is the time and effort it takes to execute the inspection process.

“Our job is to be the eyes and ears for the owner and the design team to confirm that the construction actually has taken place as per approved documents,” says Goel.

The documentation includes drawings and specifications regarding the type, strength and properties of the materials and how they will be joined and placed as well as how the process fits in with construction codes. Criteria to accept or reject such factors are well-established.

“We come in to verify that or say, no, we have a problem here,” adds Goel. “We need to get this fixed. The entire team gets involved and figures out how to get it fixed.”

After the work is initiated, it’s not uncommon for the first set of rejections to be questioned, notes Goel.

AEIS employs state-of-the-art technologies to ensure optimal accuracy. One approach to test the strength and properties of an engineering material is to take a component, load it into a frame and break it to failure. That’s not possible on an active bridge.

“You need to come up with technologies that can tell you the soundness or the characteristics of the components in place without affecting its end of usefulness,” says Goel. “That’s where nondestructive techniques come in.”

For the Governor Mario M. Cuomo Bridge, the company used ultrasonic testing (UT) to examine the soundness of the welds on the large pile splices. The company has utilized the technology since 2008.

“It has come a long way,” notes Goel. “There are advanced modalities in ultrasonic testing that we have been using for the last five years that are able to classify very, very fine defects so the design team can take proper action as to whether a smaller-sized defect can be left in place.”

Through UT, mechanical sound waves in the ultrasonic range at 2.25 MHz peak frequency are transmitted into the steel being examined.

“If the sound waves experience any impedance mismatch, a certain amount of waves are reflected back,” says Goel. “Time-of-flight data is recorded, and, using simple trigonometric functions, the exact location of the ‘discontinuity’ is determined. The response amplitude or the amount of waves reflected back are calibrated and/or compared with known flaw reflectors to attribute a pass/fail criterion to the weld under examination.”

According to Goel, AEIS deployed some of its best non-destructive testing (NDT) specialists to perform the inspections, including product manager John Carlson and inspection specialist Armando Ospina. All NDT technicians are trained and certified by an NDT Level III.

“In this case, I happened to be the Level III for the technicians involved and was fully confident in their capabilities,” adds Goel. “The technicians had undergone more than 120 hours of classroom training and thousands of hours of hands-on training before they earned their Level II credentials. They understood the code and what was at stake.” 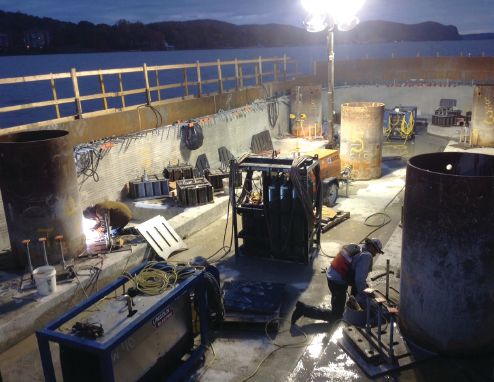 A caisson is filled with rebar and concrete.

The C+ given to U.S. bridge infrastructure by the American Society of Civil Engineers (ASCE) in 2016 highlights the potential for structurally deficient bridges to become unsafe for travel and also hinder commerce. On the other hand, infrastructure spending can create abundant job opportunities for repair or replacement. At its last count, the ASCE puts a $123 billion price tag on bridge rehabilitation projects.

According to the American Road and Transportation Builders Association (ARTBA) in its latest annual bridge report based on the U.S. Department of Transportation’s 2019 National Bridge Inventory, there are 178 million daily crossings on more than 46,100 structurally deficient U.S. bridges.

One in three U.S. bridges needs repair or replacement. At the current rate, it would take 50 years to fix all of the nation’s structurally deficient bridges, according to ARTBA.

Part of a bridge’s regular inspection entails determining the limit of weight or speed in the traffic it carries, requiring load restriction postings. In 2016, one in 10 bridges had such restrictions. Posted bridges can dramatically increase driving time for larger vehicles such as school buses, ambulances and delivery trucks, according to the ASCE.

The ASCE’s next report card will come out in February 2021.

Ghosts in the Welds?

At the beginning of the project, AEIS inspectors encountered a larger percentage of rejects than usual in a typical welding project. “The output from a typical ultrasonic flaw detector is typically a bunch of rectified waveforms on an LCD screen,” adds Goel. “The technicians interpret the data and mark the rejects on the weld joint. No one sees a readily formed image of a rejected weld. The default response from all parties involved is to check the technicians’ data.” 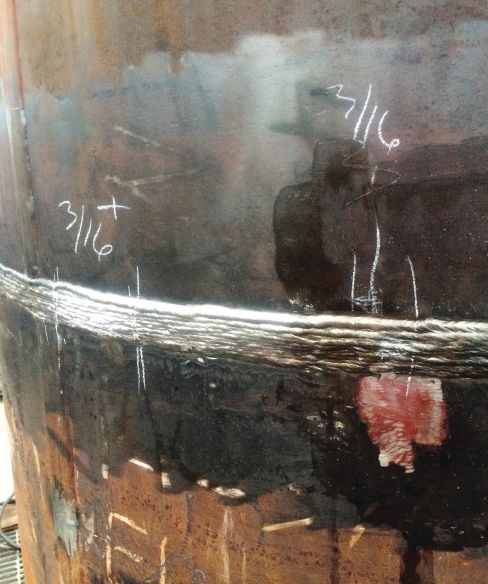 Markings on a 6-foot pile splice indicate the location of a backing bar faying gap.

Experts were called in, offering advice and some speculation—some even suggested that what was being viewed were ghost echoes arising out of electrical interference from other devices.

“We suggested a blind evaluation, whereby a 72-inch-diameter pile was welded,” explains Goel. “Our inspectors examined the welds with ultrasonic testing. The entire section was transferred to our laboratory in New Jersey where the pipe was X-rayed, and then sections were cut in the locations where we had earlier reported defects non-destructively through ultrasonic testing.” 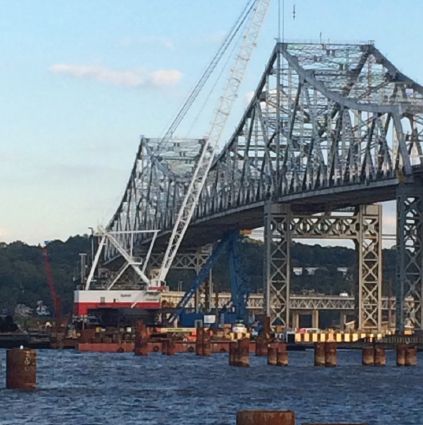 Seen below the Tappan Zee Bridge, the working bar“Hoosier” is named after the crane of the same name. 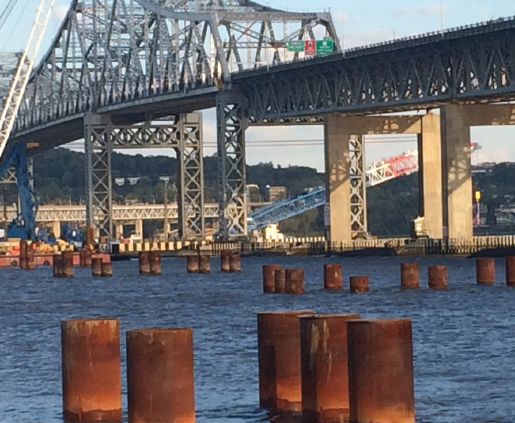 The sections were polished and macro-etched. Data from the radiographs and the sections proved the ultrasonic data.

“Some experts were so convinced that the technicians were at fault that this exercise was repeated again, with the same result,” adds Goel. “Once this aspect was put behind us, the team focused on the real root-cause analysis and mitigation of the same.”

A large infrastructure project such as a bridge inspection is a slow process, notes Goel.

“In the beginning, it’s one or two people,” he says. “As the project ramps up, so does our manpower. Then there’s a phase at some point in time where it starts stepping down. The peak of our work got finished in December 2017. Since then, it has slowly trickled down to them calling us once in a while as needed.”

Engineering firms contact the company for support services. In new construction, the work commences from the time some of the bridge components—such as the structural steel or pre-cast concrete—are constructed offsite.

“Our work starts even before construction would start and goes from there until the bridge is fully constructed,” says Goel. “We are typically invited by various design-build teams to participate in the bid when they bid for the project, which can be one to two years before the actual construction starts. 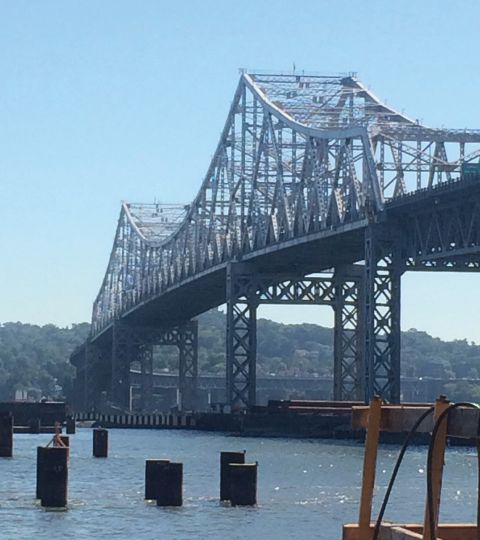 A photo shows the Tappan Zee Bridge before detonation.

“In the case of the Governor Cuomo bridge, we entered late and joined forces with The LiRo Group to supplement them on welding and NDT, which is our forte,” he adds.

Goel points out that most infrastructure projects are either design-build or public-private partnerships (PPP). The Governor Mario M. Cuomo Bridge was constructed with design-build funding. The New York State Thruway Authority and the New York Department of Transportation served as the bridge project’s co-sponsors.

According to Goel, communication is key in working with the various factions involved in a construction project.

Goel says he valued working with The LiRo Group. 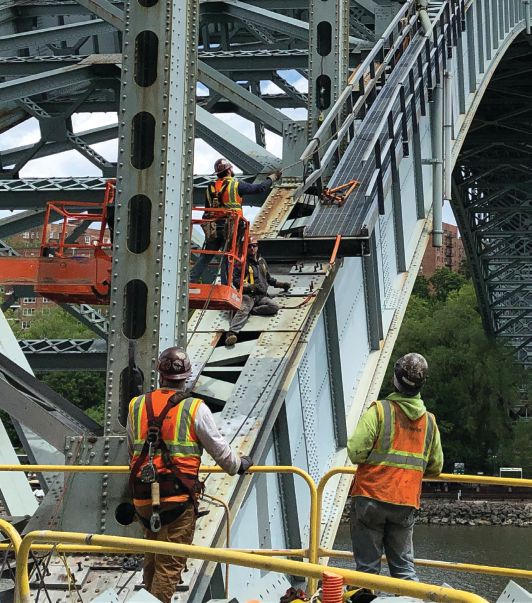 Vincent Montanti, construction quality control manager for The LiRo Group, notes that AEIS’ seasoned team was an essential part of the process of creating New York’s longest bridge, what he calls “an incredible feat of engineering, construction and design.” AEIS delivered “top-quality inspection and testing, ensuring a high level of public safety,” he adds.

One of the benefits of bridge inspection is not only increased safety, but cost savings.

“As metallurgical engineers, we see it is always better to avoid repair than trying to do repair,” Goel says. Repairs entail using equipment that generates heat, which changes the metallurgical properties of the material, including its strength and impact. 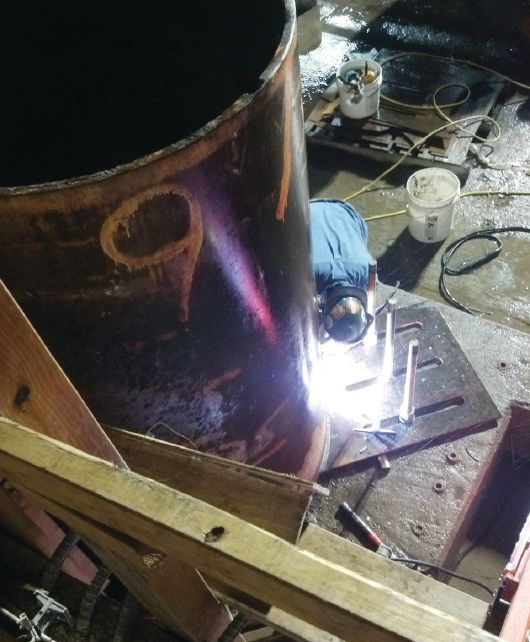 “That is so detrimental,” notes Goel. “An inspector is able to prevent something like that from happening. That’s truly meritorious to the project.”

Goel is not surprised by the C+ grade the American Society of Civil Engineers has given the U.S. bridge infrastructure (see “Details on Structurally Deficient Bridges,” above).

“That is very much what we see,” he says. “Some of it is due to a lag in timely inspections. The lack of inspections and the accessibility to inspections given that a lot of these bridges are very old does not surprise me. Hopefully, some of these new technologies can bring them to the fore to help us predict the failures more accurately, but we are still far away from perfecting those technologies.”