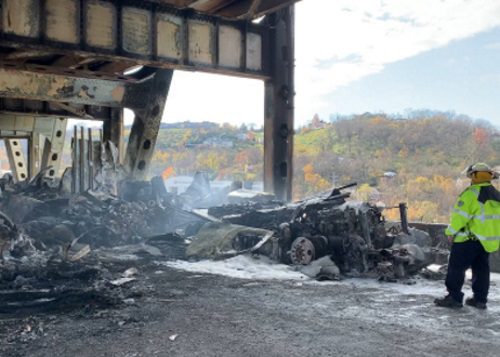 The Federal Highway Administration issued $12 million in “quick release” emergency relief on November 13 to help begin repairs on the Brent Spence Bridge after it suffered damage by a fire resulting from a commercial truck crash.

[Above photo via the KYTC.]

The Brent Spence Bridge is a double decker cantilevered truss bridge that transports Interstates 71 and 75 across the Ohio River between Covington, Kentucky, and Cincinnati. In the early morning hours of November 11, a truck hauling chemicals crashed into a jackknifed truck on the bridge, catching fire and damaging its northbound deck.

“These funds will help the safe and timely repair of the that bridge, which is such an important transportation link between Kentucky and Ohio and one of the busiest freight corridors in our nation,” noted U.S. Transportation Secretary Elaine Chao in a statement.

The Kentucky Transportation Cabinet immediately closed the bridge following the crash and vehicle fire – including, for several days, the navigable waterways underneath it – to conduct safety inspections. Those inspections – supported by laboratory testing – indicate that the bridge only suffered “localized” damage from the fire that did not compromise its structural integrity.

On November 16, the KYTC awarded a $3.1 million contract to Kokosing Construction Co. to repair the bridge, with a target reopening date of December 23.

“The bridge is safe and sound and sturdy,” noted KYTC Secretary Jim Gray in a statement. “This has been confirmed through an exhaustive inspection of the bridge, supported by laboratory analysis. Once the lab testing told us the critical supports were still strong and not compromised, the repair job became clear from an engineering and construction standpoint.”

Reopening the Brent Spence Bridge quickly is critical as that bridge – originally built in 1963 – serves as a critical transportation link for the region and the nation: carrying an estimated 160,000 vehicles per day, which includes truck freight shipments.

Currently, the KYTC is re-routing northbound commercial trucks to detour onto I-275 toward alternative crossings rather than cut through the city of Covington.

“The intention is not to penalize drivers but to prohibit large trucks from clogging local streets, creating traffic hazards and congestion,” Gray said in a separate statement. “Diverting drivers onto our established detours will keep traffic flowing as smoothly as possible during this limited bridge closure.”

He added that the KYTC is “determined” to get the Brent Spence Bridge repair project underway as soon as safely possible because of its importance of to the communities it connects and to the nation’s commerce.

“At the same time, we are going to return to the public a safe, sound bridge,” Gray said. “There will be no cutting corners.”

Comments are disabled
NEXT ARTICLE
Stora Enso with “license to operate” for CLT in the North American market
November 24, 2020
PREVIOUS ARTICLE
DART Board of Directors Hires David Leininger as Interim President/Executive Director
November 24, 2020