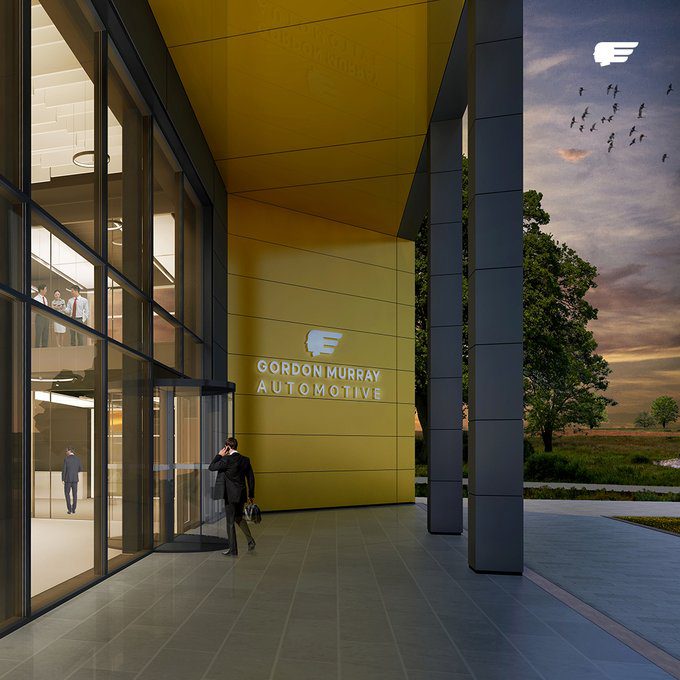 Gordon Murray Group has revealed plans for an all-new global headquarters at Windlesham, Surrey. The new technology campus will be built on a 54 acre site providing state-of-the-art facilities for world-leading automotive design, engineering and advanced vehicle development and manufacturing.  This announcement closely follows the launch of the world-beating T.50 supercar and underscores the development of the Gordon Murray Group.

The 130,000 sq ft development, encompassing three buildings, will also see the Gordon Murray Group create more than 100 new highly skilled jobs within the next three years. Phase one is aiming to commence construction and will house a vehicle manufacturing centre, customer sales and the Gordon Murray Group heritage collection. The whole site is due to be completed by the end of 2024 with a total investment of £50M.

Professor Gordon Murray CBE led the vision for the new global headquarters and Architects, Design Engine, were responsible for the design. The Gordon Murray Group will be working closely with Surrey Heath Borough Council to ensure that both the business and the buildings are sympathetically integrated into the historic site. The picturesque parkland on the existing site will be retained, preserving and enhancing its natural beauty and making it a welcoming setting for employees and visitors.

Professor Gordon Murray, Chairman, Gordon Murray Group: “This new technology campus and global headquarters is a major investment and a huge step forward for the Gordon Murray Group, as we gather momentum for the next phase of our business and our brands, spearheaded by the all-new T.50 supercar.

“Our innovative new technology campus is a fantastic new home and will give us world-class facilities that have been designed with a lot of attention to communication, workflow and social interaction – which will bring new levels of productivity to our already very efficient team.

“This new HQ is a significant investment and will create high value-added new jobs. We’re also proud to be already making significant contribution to UK exports, and helping secure the vital UK automotive supply chain. Over 90 per cent of the content of the new T.50 comes from UK supplies, which is something that we specified from the start. It is designed, engineered and manufactured from world-class British components in Britain.

“On a personal note, I have lived and worked in Surrey for over 50 years and we look forward to working with the Surrey Heath Borough Council and the local communities to integrate our business into the borough and to sensitively develop this site which as so much potential.”

Rt Hon Michael Gove MP, Chancellor of the Duchy of Lancaster and Member of Parliament for Surrey Heath: “We are delighted that the Gordon Murray Group has announced moving into the Surrey Heath constituency. It is a highly respected business, globally renowned for design and technology. I am especially pleased that this will bring a number of highly-skilled new jobs to Windlesham.”

The new headquarters incorporate a revolutionary layout in the design and prototyping area of the main engineering facility, which will deliver an ultra-efficient, world-class vehicle development process. Individual build bays for prototype vehicles are sited adjacent to their respective design team with common access areas to ensure engineering teams communicate and work together efficiently.

Elsewhere on the technology campus, the new headquarters will house state-of-the-art office and presentation facilities, while a dedicated R&D structure will continue to advance the group’s leadership in automotive engineering and materials research.

Richard Jobson, Founding Director, Design Engine said: “We’re delighted that our scheme has reached this important milestone. It is incredibly exciting to develop a series of buildings that will enable the Gordon Murray Group to continue to be at the forefront of global car design.”

Alan McClafferty, Leader, Surrey Heath Borough Council said: “We are delighted that Gordon Murray Group will be moving to the Borough and expanding their business. They are a local firm with a strong family ethos, who, despite the current global pandemic are moving forward with these exciting plans for their business. Whilst changes to the site are still subject to planning approval, we wish them every success in their continued development.”

In addition to the new Windlesham facility, the Gordon Murray Group will retain its existing facilities. The site at Dunsfold Park, Surrey will be used to manufacture the exclusive T.50 supercar and T50s track-focused version, as well as continuing research and development in the innovative and agile iStream® manufacturing system. The original Shalford site will be occupied until the technology campus is finished.

Gordon Murray Design is a visionary design and engineering company, established in 2007, with a focus on developing an innovative and disruptive manufacturing technology trademarked iStream®. It has since built a global reputation as one of the finest automotive design teams in the world, with a highly innovative approach from concept and design, through to prototyping and development for production.

Gordon Murray Automotive creates exclusive low volume sports cars – the T.50 supercar will be the brand’s first model with customer cars built from January 2022. The company is a sister company to Gordon Murray Design and was first announced in November 2017 during an exhibition, named ‘One Formula’, which celebrated Murray’s 50 years of car design.

Having spent 20 years as a Technical Director for two Formula One teams from 1969-1990, Gordon Murray has a wealth of technical, design and engineering experience. At Brabham he was instrumental in two world championship wins (1981 and 1983) before three consecutive championship wins with McLaren racing (1988, 1989 and 1990). In 1990 – after 50 Grand Prix wins – Gordon moved away from Formula One to concentrate on establishing a new company for the group, McLaren Cars Limited.

His first project there, the F1 road car, is still regarded as one of the world’s best-engineered cars. A racing version won two world sports car championships and the Le Mans 24-hour race in 1995. McLaren Cars then completed several other successful projects culminating in the Mercedes-Benz SLR McLaren.

Gordon left McLaren in 2005 to set up Gordon Murray Design Ltd (in 2007), of which he is Chairman. The innovative British company is a world leader in automotive design, and reverses the current industry trend for sub-contracting by having a complete in-house capability for design and engineering.

In May 2019, Professor Murray was made a Commander of the British Empire (CBE) by the Duke of Cambridge, Prince William, in recognition of his contributions to the motorsport and automotive sectors over the past 50 years.