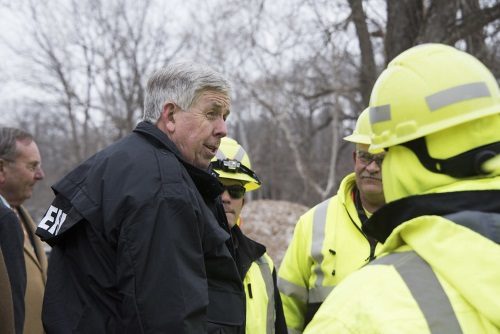 As reported by the AASHTO Journal: https://aashtojournal.org on November 10, 2020 - in Featured, News, People

Out of the 11 state governorships up for election in 2020, incumbents seeking re-election won nine of them – six of them Republican and three Democrat – with two open seats captured by Republican candidates.

[Above photo of Gov. Mike Parson (R) by MoDOT.]

Meanwhile, voters in 18 states approved a record 94 percent of state and local transportation-focused ballot initiatives so far, providing an additional $14 billion in one-time and recurring revenue for transportation improvements throughout the country, according to an analysis by the American Road & Transportation Builders Association.

Results are still pending for 13 measures, but the analysis by ARTBA’s Transportation Investment Advocacy Center indicates voters approved 303 of 322 transportation-focused ballot initiatives – the highest approval rate in the 20 years ARTBA has been tracking initiatives.

Altogether, those 303 approved 2020 measures will support $12.7 billion in new transportation investment revenue and $1.3 billion in continued funding through tax extensions, renewals or protections, the group said.

Where the governorship races are concerned, according to a variety of news reports, incumbents who successfully won re-election include:

In Utah, the first of two open governorship seats in this election cycle, current Lieutenant Governor Spencer Cox (R) won election to a four-year term as governor. He replaces Gary Herbert (R), who chose not to seek re-election after serving as Utah’s governor for more than 10 years.

In Montana, Greg Gianforte (R) – who previously served in the House of Representatives – won election to a four-year term as the state’s first Republican governor in 16 years. He replaces Steve Bullock (D) who served two-terms as governor and who lost a Senate election bid this year.

In terms of state and local transportation-focused initiatives on the 2020 ballot, major victories include the approval of Issue 1 by Arkansas voters, which allows for the continuation of a half-cent sales tax measure to fund transportation infrastructure projects.

“The passage of Issue 1 is truly a victory for the state of Arkansas,” explained Lorie Tudor, director of the Arkansas Department of Transportation, in a statement.

“The continued investment and progress in our roads will increase safety and mobility and provide economic opportunities for generations to come,” she added.

Other major wins and losses for transportation ballot measures this election cycle include: