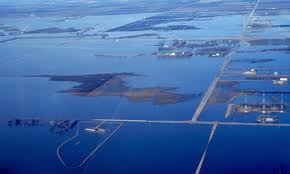 A new approach that can calculate the cost of damage caused by flooding is to be presented at the International Conference of Flood Resilience: Experiences in Asia and Europe at the University of Exeter this week. The method combines information on land use with data on the vulnerability of the area to calculate the cost of both past and future flooding events.

Climate change, along with increased building on flood plains, has led to both a greater likelihood and a higher impact of flooding across the globe.

The method has already been employed to estimate the damage caused by heavy rain events that caused serious flooding in Barcelona in 2011 and in Dhaka, Bangladesh, in 2013.

As well as being used in the analysis of historical flood situations, the methodology is being used to predict the impact of future flooding, including health impacts of pollution caused by combined sewer overflows. Information on land-use from urban growth projections is coupled with hydraulic modelling results to assess the effectiveness of different strategies for future flood scenarios.

Flooding places enormous pressures on national economies, cities, communities and individuals. The short-term impacts may include many hundreds of casualties, displaced people, serious health problems and huge damage to property and infrastructure. Recovery and rebuilding in the affected areas can take years.

Two hundred experts from nearly forty countries will gather at the University of Exeter from the 5 – 7 September 2013 to discuss the latest advances in flood management plans and flood resilience measures.

Conference Co-Chair Professor Slobodan Djordjević from the Centre for Water Systems at the University of Exeter said: “The impact of flooding, especially in urban areas, can result in tremendous damage to buildings and contents, huge financial costs as well as serious health risks. In some cases floods can threaten human life, result in loss of industrial production and lead to societal disruption. This conference is an opportunity for researchers to meet delegates from city planning services, relief organisations, consultancies and software companies from across the world. It is imperative that we work together with our international partners to implement flood resilience measures and build robust flood management plans so that we can minimise disruption and loss of life in the face of inevitable future flooding.”

Professor Sir Steve Smith, Vice Chancellor of the University of Exeter, will give the opening address at the conference which will be followed by a keynote lecture by the Taiwan Minister of the Interior, Professor Hong-Yuan Lee, who will speak about Taiwan’s experience of the governance of climate change and aggravated natural disasters. Other keynote talks during the week will include discussions on responses to major flooding in Thailand, flood insurance in Germany, resilient technologies and research highlights from the CORFU project.

The conference is a key dissemination event of the European Seventh Framework Programme project CORFU (Collaborative Research on Flood Resilience in Urban Areas, www.corfu7.eu) coordinated by the Centre for Water Systems, which is dedicated to researching and improving urban flood resilience from both European and Asian perspectives.

Conference delegates will also have the opportunity to see the premiere of ‘Resilience’ – a stunning documentary about floods filmed in CORFU case study cities, Bangkok and New Orleans.

For further information on the International Conference on Flood Resilience: Experiences in Asia and Europe visit: http://icfr2013.ex.ac.uk/

About the University of Exeter

The University has invested strategically to deliver more than £350 million worth of new facilities across its campuses in the last few years; including landmark new student services centres – the Forum in Exeter and The Exchange on the Penryn Campus in Cornwall, together with world-class new facilities for Biosciences, the Business School and the Environment and Sustainability Institute. There are plans for another £330 million of investment between now and 2016.

At @autodesku , the learning never stops. Join the conversation and take your career to the next level.… https://t.co/vBnfjTQkRX
5 hours ago
@BentleySystems Issues Call for Nominations for the Year in Infrastructure 2020 Awards Program https://t.co/YUJ7GcJwTs #YII2020
6 hours ago
@awwa Meet the Water operators at the Annual Conference & Exposition (ACE) & be sure to express your gratitude for… https://t.co/zfSRFxUA8i
6 days ago
@Wipro Wipro and @SmartEnergyW (SEW) form global strategic alliance to accelerate #DigitalTransformation for enterp… https://t.co/UPeRBLc4Wa
2 weeks ago
DFI Educational Trust and @terraconlife Foundation Announce a New Scholarship Fund https://t.co/t18FBN7Kd9
2 weeks ago
@Transoft Solutions Acquires Canadian-based @BriskSynergies https://t.co/hceegJKx4q
3 weeks ago
Video: Interview with CEOs of @BentleySystems and Topcon Positioning Systems @topcon_today https://t.co/38rRQNbNcO
3 weeks ago
New @ASCETweets Publication Explores Engineering Designs for Precipitation Extremes https://t.co/2OX0kg9cOg
3 weeks ago
@HNTBCorp Americans pay an average of less than $25 a month to maintain the roadways and bridges essential to mob… https://t.co/T6mrVfdibT
4 weeks ago
Sdiptech lists: Trends – and challenges for the #infrastructure sector 2020 https://t.co/4cuswAcecV
1 month ago