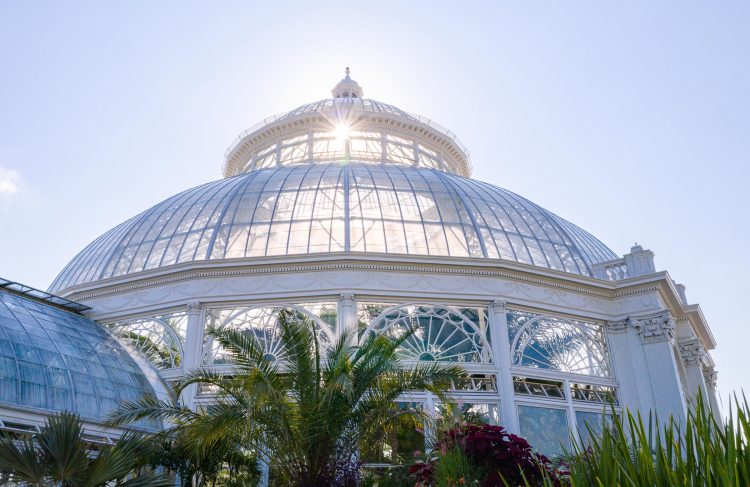 Redesigned Palms of the World Gallery Reopened to the Public on Tuesday, September 22

(Bronx, N.Y. ) – EW Howell Construction Group, one of the region’s leading builders, has completed renovation work on the iconic palm dome of the Enid A. Haupt Conservatory at  The New York Botanical Garden (NYBG) in the Bronx, NY, which reopened to the public on September 22.

“EW Howell has been privileged to work on projects that feature some absolutely stunning architectural design, and with input from arts and culture patrons who are some of the most passionate personalities in the entire city,” said Bob Zirkel, Vice President of EW Howell’s Arts & Cultural Division.

“Renovations for cultural institutions present unique challenges and we were honored to be chosen by The New York Botanical Garden to restore the palm dome, one of New York City’s most iconic structures.”

The $18 million restoration project, which began in April 2019, upgraded the infrastructure of the 118-year-old dome, home of the Haupt Conservatory’s celebrated Palms of the World Gallery, to ensure that the palms on display continue to thrive. The project also provided an opportunity for NYBG horticulture curators to redesign and replant the collection to highlight the history of tropical plant research at NYBG and the ecological and economic importance of the palm family.

Constructed by Lord & Burnham Company and completed in 1902, the Enid A. Haupt Conservatory is considered one of the most superb glasshouses of its time. It was designated a New York City landmark in 1973.

Conservatory restoration projects occur approximately every 20 years, and EW Howell has worked with NYBG on other projects, including the construction of the new LEED Gold Edible Academy, completed in 2018. The newly completed restoration, which was led by Jan Hird Pokorny Associates and Silman Structural Engineers, focused on the central dome that soars above the Palms of the World Gallery, comprising the cupola, upper dome, drum (or compression ring), and lower dome. Interior scaffolding and a temporary horizontal work surface erected below the dome drum and an enclosed cylinder around the exterior of the drum and portions of the lower and upper domes enabled the work to take place efficiently while providing a weather-proof barrier to safeguard the tropical plants that remained in the Gallery below.

Using leading-edge materials and technologies, the restoration makes the building more energy efficient and increases its longevity while respecting its landmark status. The painted wood cladding around the drum and the wood cornice—constructed with rot-resistant, first-growth bald cypress that is now very rare—were replaced with cast and extruded aluminum components that are durable and require less maintenance. Structural repairs to the compression ring were completed, and a new high-performance metal coating was applied to all structural members to protect them from future deterioration. Elements of the dome’s infrastructure that were upgraded included lighting, the electrical system, and the heating system, including its custom enclosure. In addition, the Conservatory’s public restrooms were renovated, including the addition of two single-use restrooms; improvements were made to the building’s exhibition and path lighting; and bluestone pavers in the palm dome and the Conservatory Courtyards were repaired.

The structural steel compression ring of the Conservatory had exhibited some deterioration, which was the impetus for the timing of the latest restoration project. To enable the structural work to occur, a very specific sequence of work needed to be planned.

There was also some deterioration to the wood cornice, and maintaining the exterior paint finish was challenging, given the height of the cornice.

Scaffolding for the project was a major challenge. The platform needed to be built to the level of the compression ring of the structure, with support towers positioned between the existing plantings. The next challenge was that the scaffold platform needed to create a weatherproof barrier during the winter months when the glass above the platform would be removed for the structural repairs to be completed.

The interior painting needed to be accomplished to give NYBG many decades of performance, as some areas are very difficult to access and will only get more difficult in the future as the palms grow. New exhibition lighting was installed while the scaffolding was in place and now allows NYBG more flexibility in designing for different exhibitions.

The palm dome had all its perimeter fin tube radiation and enclosures replaced during this restoration project.

“For 118 years, visitors from our local communities here in the Bronx and around the globe have delighted in the treasures contained in the Enid A. Haupt Conservatory,” said NYBG Chairman J. Barclay Collins II. “On behalf of the Board of Trustees and the entire NYBG community, I thank our public-private partnership of funders for their substantial financial support, which made this restoration possible. Their commitment will ensure that generations to come will find inspiration and connection to plants and learn about their essential role in our own lives and the sustainability of life on this planet.”

Funding for the palm dome restoration project included $13 million from the City of New York, including the Mayor’s Office, City Council, and the Bronx Borough President; $3 million from the LuEsther T. Mertz Charitable Trust; and $850,000 from the State of New York’s Empire State Development Corporation.

In addition to The New York Botanical Garden, EW Howell Construction Group has become one of the partners of choice for some of the Tri-State area’s leading cultural institutions, including the Museum of the City of New York, Smithsonian Cooper Hewitt National Design Museum, Brooklyn Academy of Music, the Institute for the Study of the Ancient World,  Brooklyn Museum Christie’s Auction House and the Metropolitan Museum of Art.

Founded in 1891, EW Howell Construction Group is a leading New York based General Construction and Construction Management firm with offices in Manhattan and on Long Island. They provide construction services throughout the region to a diverse range of clients in the Retail, Education, Arts & Cultural, and Healthcare sectors. Dedicated to a “Build Simply” approach, the firm provides a simplified construction experience for its clients. EW Howell’s meticulous pre-construction, planning and project management, combined with collaborative client relationships and strong connections with the region’s top sub-contractors ensures they continue to deliver world class projects for their clients as they have done for over 125 years. For more information, visit: www.ewhowell.com.

About The New York Botanical Garden

Founded in 1891, The New York Botanical Garden is the most comprehensive botanical garden in the world and an integral part of the cultural fabric of New York City, anchored in the Bronx. Visitors come to the Botanical Garden to connect with nature for joy, beauty, and respite, and for renowned plant-based exhibitions, music and dance, and poetry and lectures. Innovative children’s education programs promote environmental sustainability and nutrition awareness, graduate programs educate the next generation of botanists, while engaging classes inspire adults to remain lifelong learners. The 250-acre verdant landscape—which includes a 50-acre, old-growth forest—and the landmark Enid A. Haupt Conservatory support living collections of more than one million plants. Unparalleled resources are also held in the LuEsther T. Mertz Library, the world’s most important botanical and horticultural library with 11 million archival items spanning ten centuries, and the William and Lynda Steere Herbarium, the largest in the Western Hemisphere with 7.8 million plant and fungal specimens. Committed to protecting the planet’s biodiversity and natural resources, Garden scientists work on-site in cutting-edge molecular labs and in areas worldwide where biodiversity is most at risk.