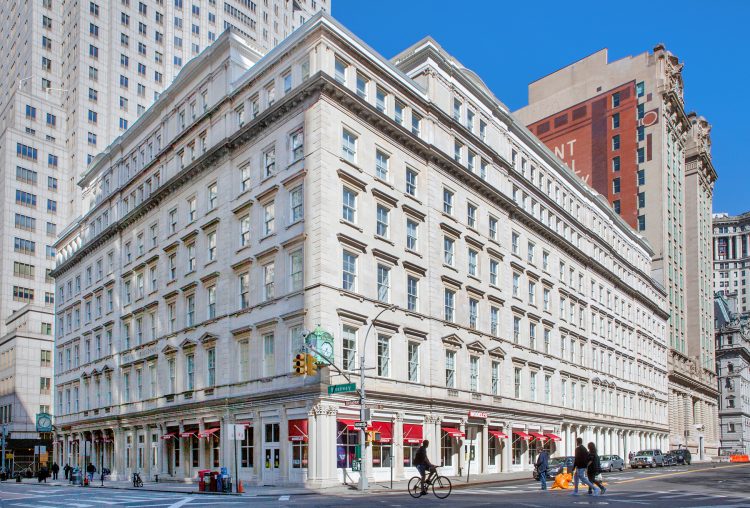 New York, NY – The historic restoration of the marble façade of the seven-story, 240,000-sq.-ft. building at 280 Broadway, located between Chambers and Reade Streets in the Civic Center district of Manhattan, has won a 2020 Lucy G. Moses Preservation Award from the New York Landmarks Conservancy. The project team for the recently completed restoration included the New York City Department of Design and Construction (DDC), the Department of Citywide Administrative Services (DCAS), Urbahn Architects, and historic conservator Jablonski Building Conservation.

Urbahn’s other recent project for DCAS and DDC, the restoration of the Surrogate’s Courthouse skylight at 31 Chambers Street in Manhattan, has also won this year’s Lucy G. Moses Preservation Award, highlighting the architectural firm’s expertise in leading some of the nation’s most complex historic restoration undertakings.

The Lucy G. Moses Awards are the New York Landmarks Conservancy’s highest honors for preservation excellence. The award will be bestowed upon the project team on September 23, 2020, during the 30th Anniversary Lucy G. Moses Preservation Awards Gala.

According to Natale V. Barranco, AIA, LEED AP, Urbahn’s principal in charge, “This $17.5 million project’s challenges included matching the Tuckahoe marble; the sheer size of the renovation; and the phasing, which had to ensure the project would proceed without interrupting street traffic or operations of the building’s tenants. In addition, some of the cornices that need to be replaced or replicated weigh 400 pounds each, so significant planning to protect pedestrians was required.”

The five-story 280 Broadway structure was built in 1846 for A.T. Stewart Company, which opened the city’s first department store in it. The design, by John B. Snook of Joseph Trench & Company, called for heavy timber and masonry with cast iron on the first floor. Two additional stories were added in 1851.  280 Broadway is the first commercial building in New York City to be designed in the Italianate style and the first commercial structure in the city to be clad in Tuckahoe marble.

It was designated a national landmark in 1965 and a New York City landmark in 1996. For a time it was the headquarters of The Sun newspaper, and a clock from that era still rests on the Broadway corner of the building, reading “The Sun… It Shines for All.” The building is now owned by New York City and houses DCAS and other agencies, with retail tenants on the first floor. It is located across from City Hall Park and occupies a very prominent location in downtown Manhattan.

DCAS is the building owner, and DDC was the program manager for the renovation’s design and construction phases. In addition to Urbahn, serving as the architect, the team included Jablonski Building Conservation, Inc. as the conservation and historic preservation consultant, and Ysrael A. Seinuk P.C. as the structural engineer. 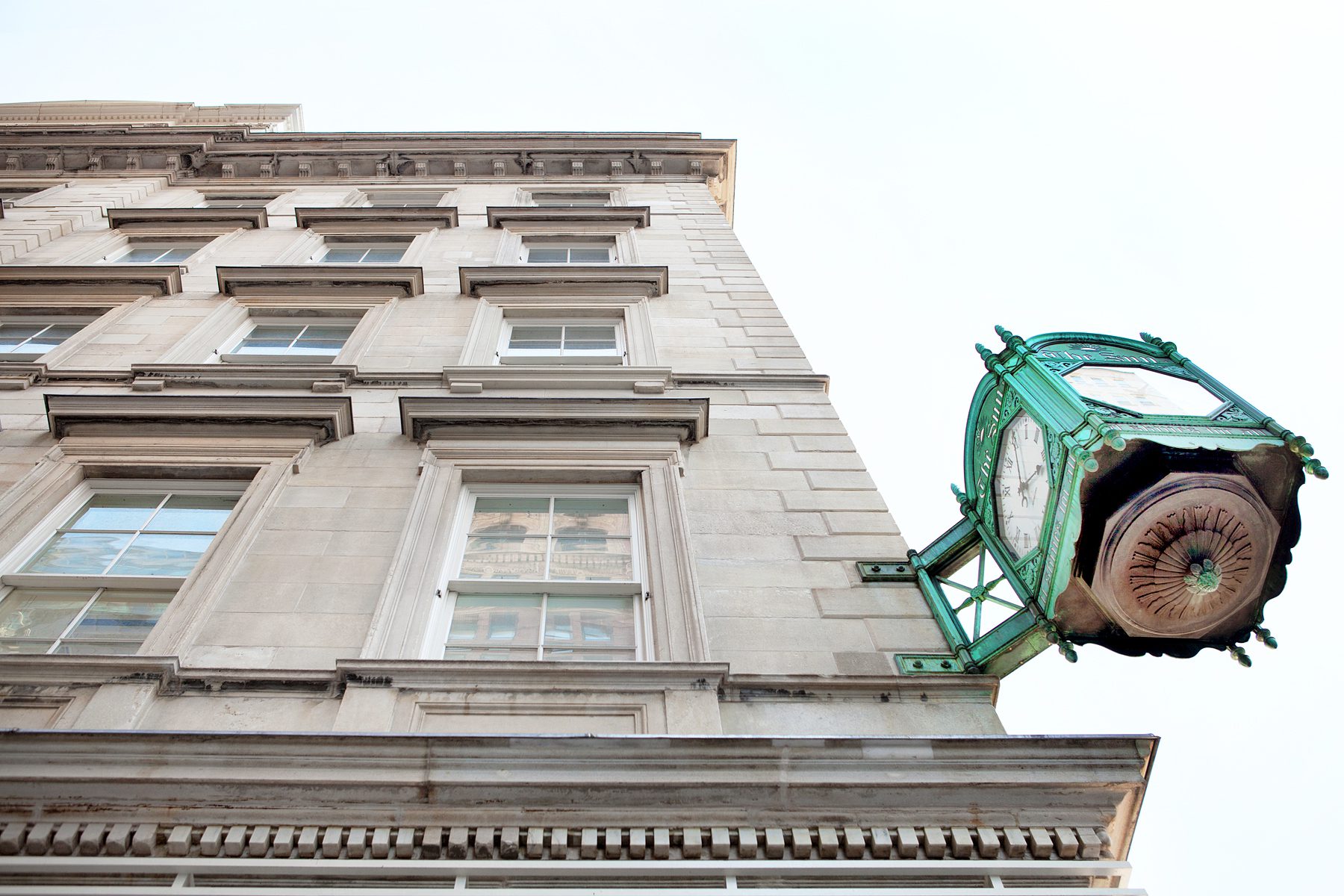 Although the project began as a New York City Local Law 11 (now Façade Inspection Safety Program or FISP) façade inspection and repair project, the extent of deterioration, coupled with the importance of the building as a historic landmark, led to a comprehensive renovation of both the façade and roofs. The team’s goal was to renovate the historic façade, while observing strict landmark preservation standards. “The project team reused as much of the original marble as possible for historical accuracy and continuity,” continued Barranco. “In the sections where it was not possible to reuse existing marble, we used Georgia marble chosen to match the look and veining of the original Tuckahoe marble,” he added. The material was hand selected at the quarry. The team also performed Dutchman repairs, which replaced only the faulty portions with new stone to match the adjacent material as closely as possible.

The 55,250-square foot façade extends 200 linear feet along Chambers Street, 225 linear feet along Reade Street, and 151 linear feet along highly trafficked Broadway. The entire façade is 85 feet high by 650 feet long. The work was broken three partially overlapping phases focused on individual façades. The project included the renovations to the marble façade and its cornices; upgrades to selected skylights; cast iron repairs; repairs and repointing of the brick façade in the courtyard; and repairs to the ornate copper dormers, railings, and gutters, which were either repaired or replicated using the original 19th Century processes. The brick parapets and corbeled brick below the coping stones were also repaired.

“During preconstruction and design, Urbahn tested and sampled the façade, which required a review of all marble elements of the entire façade, with the architectural and preservation team members reviewing each piece for material integrity and condition of the anchoring system,” said Antonio Pinto, AIA, Urbahn’s architect on the project. “The testing was fully hands-on. The team used acrylic hammers, tapping on each stone to assess its integrity. The inspection was performed from a 125-foot boom located on the street, allowing access to the top of the building.” The project team also tested over 20 different cleaning solutions to determine the most suitable one for the type of stone installed on the façade.

One of the most interesting elements of the project was the renovation of the support structure for the oversized architectural clock located on the corner of Broadway and Chambers Street. Originally installed in 1916, the electric clock has worked continuously for more than 100 years. The clock’s 100-year old steel support elements, hidden within its ornamental brass enclosure, were deteriorating. The team replaced these structural elements, cleaned the clock, replaced the internal light bulbs, and made localized repairs to some of the ornaments, including the spire.

Urbahn Architects is a full-service planning and design firm based in New York City. Since its founding in 1945, the firm has designed projects for organizations and institutions that operate in the residential, healthcare, education, justice, science, transportation, public, and infrastructure sectors. Urbahn served as the architect for some of the nation’s most iconic structures, including the Vehicle Assembly Building and Launch Control at Kennedy Space Center in Cape Canaveral, FL, and the Fermi National Accelerator Lab in Batavia, IL. Urbahn’s annual domestic and international design project volume exceeds $500 million in construction value.

The firm’s historic and landmark renovation portfolio also includes the preservation of five grand courtrooms at the Thurgood Marshall US Courthouse, the Surrogate’s Courthouse skylight, and Grand Central terminal exterior renovation master plan in Manhattan; the LIRR Forest Hills Station in Queens, NY; the One-Stop In-processing Center at the United States Military Academy in West Point, NY; the Winder Building in Washington D.C.; and the Orchard Beach Bathhouse master plan in the Bronx. In addition, many of Urbahn’s transportation infrastructure projects for the Metropolitan Transportation Authority and NJ Transit have involved historic preservation work.