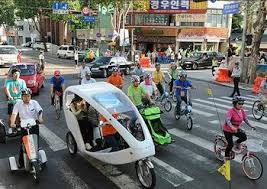 The EcoMobility World Festival will be held in Suwon, 30 kilometers south of Seoul, from Sept. 1-30 to exhibit bicycles, scooters, light electric vehicles and other environmentally sustainable mediums of transport developed under innovative green technologies. A total of 39 manufacturers from eight countries/regions, including the United States, Germany, Taiwan and South Korea, will feature their newest ecomobile lineups.

The German bike maker Toxy will present its “Trimobole” tricycle that can carry three people at a time but only requires one person to pedal. The bike was ridden during the Hamburg Marathon in April by reporters and a camera man to get close-up shots of the runners, according to the company. Nordic Cab will present a multipurpose bike trailer made out of eco-friendly aluminum and hardened plastic. South Korean manufacturers like Samchuly and Hyosung Motors will also showcase their electric bicycles and motorcycles.

“The organizing committee has expanded the space for promotional booths as there has been a flood of applications from companies,” said Kim Byung-ik, the chief organizer.

Alongside the promotional displays, a wide range of entertainment and cultural programs such as idea forums, product test sessions and a mini concert will be held for visitors, according to the organizers.

During the event, a neighboring area of 4,000 square meters in the city will be designated as a car-free site for visitors and local residents to test the ecomobile vehicles.

Suwon City is hoping to promote itself as a leader of sustainable development through this event, officials said. The city has taken various initiatives in the field, including running car-free days and setting a 40 percent carbon emission target by 2030.

“With this festival, we will work together to show what an ecomobile city looks like and deliver the message that this new urban lifestyle is possible,” Suwon Mayor Yeom Tae-young said.