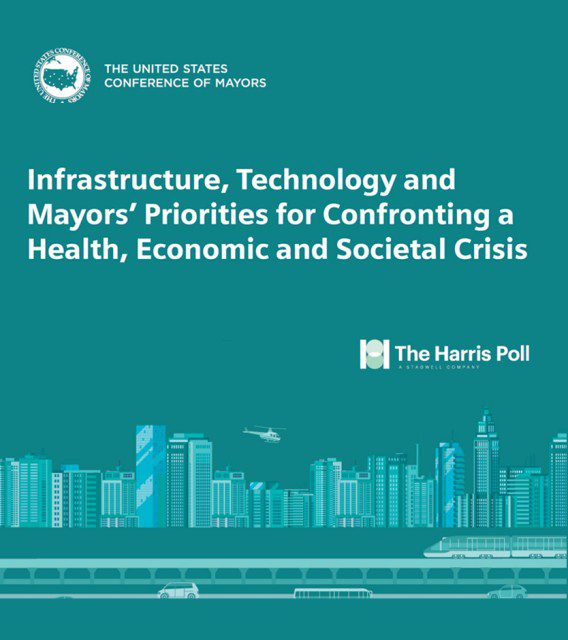 WASHINGTON, September 16, 2020 – While a majority of U.S. mayors (94%) agree that their city’s economic recovery depends on containing and preventing community spread of the COVID-19 virus, investing in infrastructure to generate jobs and economic growth is the top immediate (69%) and long-term (71%) priority for mayors, according to “Infrastructure, Technology and Mayors’ Priorities for Confronting a Health, Economic and Societal Crisis,” a new U.S. Conference of Mayors (USCM) study conducted in partnership with Siemens USA by The Harris Poll.

Those priorities, however, are threatened by cities nearly universally reporting declines in their operating budget as a result of the pandemic. Confronted by an unprecedented health, economic and societal crisis due to COVID-19, the study showcases mayors’ collective perspective on the strengths and limits of America’s infrastructure in supporting continuity amid crisis, emergency response, economic recovery, ongoing sustainability goals and the safe reopening of schools, offices, businesses and other vital institutions.

“This survey shows that mayors are more committed than ever to embracing the sparks of innovation and technology with greater urgency to adapt, redefine and reimagine their cities in order to better serve local residents and advance economic recovery,” said Barbara Humpton, CEO of Siemens USA. “Siemens is proud to work with mayors across this country to combat the challenges of COVID-19 and help build more resilient, prosperous communities. The global pandemic has only reinforced our belief that partnership between residents and their cities, partnership between mayors and cities, and partnerships between businesses and the communities are essential to moving our country forward.”

“Mayors know that few things can revitalize an economy and a city like investments in modern infrastructure and technology,” said USCM President and Louisville (KY) Mayor Greg Fischer. “We appreciate private sector partners like Siemens who work with us to leverage our resources to make cities better places to live and work. Rebuilding our infrastructure has been a consistent priority for mayors in cities large and small, but our need is made only more urgent by the COVID-19 pandemic. That’s why it’s so important for lawmakers in Washington to appreciate the severity of the budget crisis that cities are facing as a direct result of the virus. Our potential is only limited by the ability to work to together to address these great challenges.”

Key findings from this survey include:

This survey was conducted online by The Harris Poll on behalf of the U.S. Conference of Mayors and Siemens U.S.A., between August 24 – September 1, 2020 among 124 mayors of U.S. cities with a population size of 30,000 or more. Results were not weighted and are only representative of those who completed the survey.

About The U.S. Conference of Mayors

The U.S. Conference of Mayors is the official nonpartisan organization of cities with populations of 30,000 or more. Each year, during its annual conference, USCM approves a range of resolutions. These policy positions adopted collectively represent the views of the nation’s mayors and are distributed to the President of the United States and Congress.

Siemens Corporation is a U.S. subsidiary of Siemens AG, a global powerhouse focusing on the areas of power generation and distribution, intelligent infrastructure for buildings and distributed energy systems, and automation and digitalization in the process and manufacturing industries. Through the separately managed company Siemens Mobility, a leading supplier of smart mobility solutions for rail and road transport, Siemens is shaping the world market for passenger and freight services. Due to its majority stakes in the publicly listed companies Siemens Healthineers AG and Siemens Gamesa Renewable Energy, Siemens is also a world-leading supplier of medical technology and digital healthcare services as well as environmentally friendly solutions for onshore and offshore wind power generation. For more than 160 years, the company has innovated and invented technologies to support American industry spanning manufacturing, energy, healthcare and infrastructure. In fiscal 2019, Siemens USA reported revenue of $26.5 billion, including $1.23 billion in exports, and employs approximately 50,000 people throughout all 50 states and Puerto Rico.

About The Harris Poll

The Harris Poll is one of the longest-running surveys in the U.S. tracking public opinion, motivations, and social sentiment since 1963, and is now part of Harris Insights & Analytics, a global consulting and market research firm that delivers social intelligence for transformational times. We work with clients in three primary areas: building twenty-first-century corporate reputation, crafting brand strategy and performance tracking, and earning organic media through public relations research. Our mission is to provide insights and advisory to help leaders make the best decisions possible. To learn more, please visit www.theharrispoll.com.