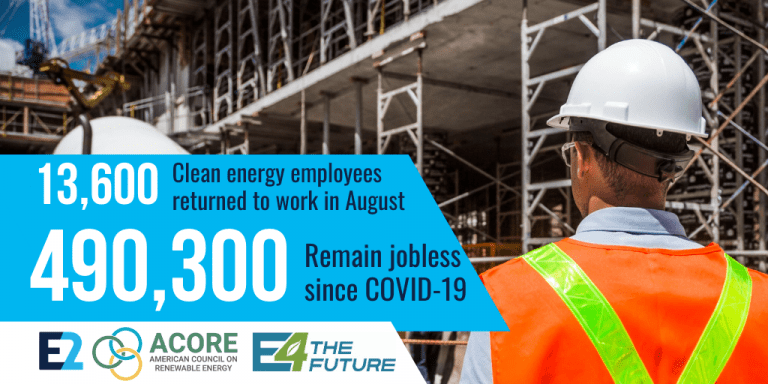 Incorporating July’s revised figure of 10,400 added jobs*, less than 5% of the remaining clean energy jobs lost nationwide have returned since June’s short-lived surge when nationwide reopenings began. The new numbers provide further indication that clean energy — which had been one of the nation’s fastest-growing job sectors — faces a long recovery, according to the latest analysis of federal unemployment filings prepared for E2 (Environmental Entrepreneurs), E4TheFuture and the American Council on Renewable Energy (ACORE) by BW Research Partnership.

Despite the reopened economy, the monthly report finds just one out of every five clean energy jobs lost between March and May has come back. In August, clean energy job growth remained under 1% in every state in the U.S., with 23 states and the District of Columbia adding fewer than 100 jobs each. Before COVID-19 struck, clean energy employers nationwide expected to add nearly 178,000 jobs in 2020 — or 14,800 every month — according to employer surveys conducted in late 2019.

While the August report shows some signs of growth, weekly unemployment claims remain at historic highs, and long-term and permanent unemployment rates continue to rise. With federal Paycheck Protection Program (PPP) funds all but exhausted, more layoffs could be imminent without congressional action.

Before COVID-19, nearly 3.4 million Americans across all 50 states and the District of Columbia worked in clean energy occupations, including renewable energy, energy efficiency, grid modernization, clean vehicles and fuels. That’s more people than work in real estate, banking or agriculture in the U.S., and three times the number of Americans working in fossil fuels. Clean energy jobs had been growing two times faster than the overall economy from 2017-2019, according to E2’s Clean Jobs America report.

“These numbers continue to sound the alarm that the critical clean energy sector needs support and needs it fast. Not only are we still  missing nearly half-a-million jobs in what was one of the fastest job-creating engines, we’re missing out on the tens of thousands of new jobs the sector was set to create in 2020 before the crisis. Without support, this impact will last far beyond the pandemic.”

“While any net return of jobs is welcome, let’s remember that energy efficiency jobs are still down by more than 345,000 from the start of this year. If it weren’t for the pandemic, this sector would likely have grown by at least 25,000 jobs from March until now.”

“Renewable energy workers have been suffering double-digit unemployment due to COVID-19 since March, negatively impacting every single state’s economy. Our ask to Congress is a simple one – we need temporary refundability of renewable energy tax credits and a delay in their scheduled phasedown. Enacting these commonsense emergency relief measures into law would get these hard-working Americans back on the job and help power our nation’s economic recovery.”

“The clean energy economy is not adding jobs at a pace that brings us anywhere near recovery territory. The lack of meaningful, sustained job growth in the sector, despite widespread economic reopening across the U.S., suggests that most of the nearly 500,000 job losses are at serious risk of becoming permanent.”

Energy efficiency continued to lead total job growth in August, followed by renewable energy and clean vehicles. However, energy efficiency experienced the smallest percentage gain (0.4%) as renewable energy saw a 0.5% rise and clean vehicles added back 1.0% of its workforce. Except for clean fuels, at least 13.2% of every clean energy sector’s pre-COVID-19 workforce remains out of work.

More than 40 states continue to suffer double-digit unemployment in clean energy, with seven states seeing clean energy unemployment at 20% or more. Georgia continues to suffer over 31% unemployment in clean energy, followed by Kentucky at nearly 29%. In August, Massachusetts led all states with the highest percentage growth in its workforce at 0.9%, while California once again had the largest total increase in jobs with 3,100 positions added (0.7%). Just two states (New York and California) gained over 1,000 jobs, while 10 states added fewer than 50 jobs.

The data analyzed for this report did not include workers who had their work hours slashed and are now significantly underemployed.

*  The July unemployment memo, which has been revised to incorporate the latest figures from the federal government, is available here.

The analysis expands on data from the 2020 U.S. Energy and Employment Report (USEER) produced by the Energy Futures Initiative (EFI) in partnership with the National Association of State Energy Officials (NASEO), using data collected and analyzed by the BW Research Partnership. The report was released in March 2020 and is available at www.usenergyjobs.org. E2 and E4TheFuture are partners on the annual USEER, the fifth installment of the energy survey first released by the Department of Energy in 2016 and subsequently abandoned under the Trump administration.

For policy recommendations from E2 on building America’s economy back better and faster through clean energy visit E2’s Build Back Better homepage.

Founded in 2001, the American Council on Renewable Energy (ACORE) is the nation’s premier pan-renewable organization uniting finance, policy and technology to accelerate the transition to a renewable energy economy. For more information, please visit www.acore.org