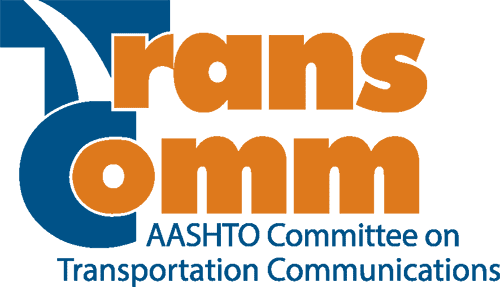 As reported by the AASHTO Journal: https://aashtojournal.org on August 31, 2020 - in Awards, News

The American Association of State Highway and Transportation Officials Committee on Communications – known as TransComm – announced the winners of its yearly skills awards competition during its virtual annual meeting on August 25.

TransComm’s skills award competition – which for more than 35 years has recognized the best communications and marketing work by state departments of transportation – hosted 132 entries submitted by 27 state DOTs in 30 categories that reflect the “broad range” of expertise managed by state DOT communications teams: from graphics, publications and news releases to social media and video.

“Earning a TransComm Skills Award is a tremendous honor for state DOTs,” noted Lloyd Brown, AASHTO’s director of communications. “Award nominees are judged by other state DOTs, meaning that the winners’ work is considered outstanding and worthy of recognition by one’s peers. That is a truly special honor.”

The Illinois DOT received the “Best Integrated Campaign with a Consultant” award for “Life or Death Illinois” safety effort, which weaved together the messages and funding for various traffic safety efforts into a single-integrated campaign.

Meanwhile, the Georgia DOT took home the “Best Integrated Campaign without a Consultant” for a distracted driving program for middle school children. The agency partnered with Scholastic to develop a first of its kind innovative cross-curriculum centered on student collaboration and problem-solving skills through English language arts, social studies, and math.

TransComm also announced the recipients of its individual awards. Tim Tait, director of communications for the Arizona Department of Transportation and TransComm vice chairman, received the committee’s Public Relations Professional of the Year.

The agency’s staff nominated Tait, who joined the Arizona DOT in 2006, for the award.

“He always thinks what’s best for the agency in providing advice and direction on our communication strategies,” noted John Halikowski, Arizona DOT’s director, in Tait’s nomination packet. “I can attest to Tim’s superior professional character in how he handles the demands from the customers we serve, both internally and externally.”

Nathan Bailey of the Illinois DOT received the Spirit of TransComm award, which recognizes the efforts of those communications and marketing staff members who are not in leadership or supervisory positions.