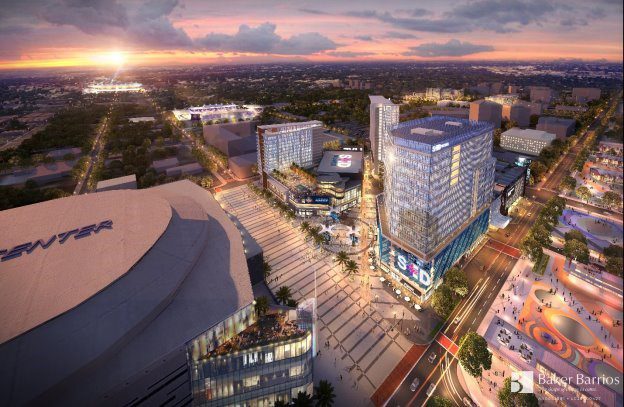 Confirmation follows a commercial agreement with SISCO, the project’s technology provider, finalizing terms with Cityzenith (CZ) and the project owners, OS+ED Dev Corp, to deploy CZ’s award-winning SmartWorldPro2™ Digital Twin platform for the first time on a megaproject in the United States.

It will be a fully interconnected Smart District, using state-of-the-art IoT, Digital Twin and AI Technologies to transform the four-block urban core, west of the I-4 Highway

Cityzenith CEO Michael Jansen said: “I’m delighted to sign with SISCO to launch the visionary OS+ED project. Efforts are already underway to develop a hi-res 3D Digital Twin model of the core project site, the 130-acre OS+ED Smart District site, and the surrounding urban neighborhood, which will encompass most of Orlando. The result will be the most-advanced and feature-rich 3D Digital Twin model of a city in the United States.

“It is our first major project of this scale in America and will highlight how SmartWorldPro2™ is able to integrate with SISCO’s IoT, artificial intelligence, smart building, and other technologies to deliver a comprehensive Digital Twin-enabled, Smart Connected Community Integrated Operating System (SCCiOS) for large building owners and operators.”

Job #1 for SCCiOS will be attracting tenants and visitors to downtown Orlando venues for a ‘wow, it feels like I’m really there’ 3D District Experience, delivering an unprecedented wealth of information and connected services. The pioneering work could also unlock additional contracts for Cityzenith on other SISCO projects totaling up to $1,000,000 by the end of 2021.

Phil Tinsley, CEO of the OS+ED Dev Corp, said: “The project is a highly programmed, high amenity development where residents, visitors and tenants experience Living-as-a-Service™ (LaaSTM) the first bundled entertainment, ticketing, hospitality, housing, transportation, food and beverage, wellness, and utilities platform of its kind in the US.

“We chose Cityzenith’s SmartWorldPro2 Digital Twin to best demonstrate and bring this data rich experience to life and are thrilled to be its first major US user.”

Tinsley predicted that tenants and residents would particularly love the easy-to-use ‘single-pane-of-glass’ software platform, accessing all the information they need when they need it, adding:

“SmartWorldPro2’s unique features will first create an online virtual 3D tour like no other; a video game-like experience where visitors navigate to and click on elements in a life-like 3D OS+ED model to see event times, retail offers, parking availability, and even the view from their hotel rooms or stadium seats.”

Michael Jansen added: “The OS+ED is high-profile, forward thinking, and transformational, and the contract is a huge victory for us, while also boosting our Cityzenith ‘Clean Cities – Clean Future’ mission.

“It must change and SmartWorldPro2™’s ability to create digitally-twinned cities to inventory GHG emissions and streamline sustainable urban redevelopment initiatives makes it the platform of choice for executing energy transition projects on any scale, whether a district, a campus, a city, or an entire country.

“Please join us on our journey and watch for more updates as SmartWorldPro2™ marches towards cleaning and freeing our cities for a better future.”

Cityzenith’s launched last month its Regulation A+ Crowdfunding Investment Round

Cityzenith recently announced the launch of a $20,000,000 Regulation A+ crowdfunding capital investment raise; an exciting time for the company as well as investors, as it continues to grow and expand globally. To learn more and become part of the story, click here

Cityzenith is based in Chicago with offices in London and New Delhi. The company’s SmartWorldPro2™ Digital Twin platform was created for anyone designing, constructing, and managing complex, large-scale building projects, properties, and real estate portfolios.

An impassioned architect, urbanist, and entrepreneur, Michael has founded and led high-growth companies in the USA and Asia for more than two decades.

Having studied architecture at Yale and Cambridge, and earned a Fulbright Scholarship, he worked as an architect in India and China for several years, leading the Asia practices of two major US international architecture firms.

In 2004, Michael founded a major BIM services company in India backed by Sequoia Capital, which grew to over 500 employees in just four years. In 2010, Michael took the helm at Cityzenith as CEO and embarked on a personal mission to revolutionize the way we use data to transform the global built environment.

Featured on CNN, CNBC, the BBC, and in major business, government, and AEC publications worldwide, Michael has received several awards for his work, including the “40 Under 40” accolade from Building Design + Construction. In 2014, Michael was honored as a World Cities Summit Young Leader in Singapore for his life-long contribution to improving sustainability and the quality of life in cities, and in 2019, he received a Chicago Innovation Award for his company’s groundbreaking work in the Digital Twin Arena.

A husband and father of three, Michael speaks Chinese and Hindi, has traveled to over 90 countries, swims a lot, reads more political and science news than he should, and plays the guitar.