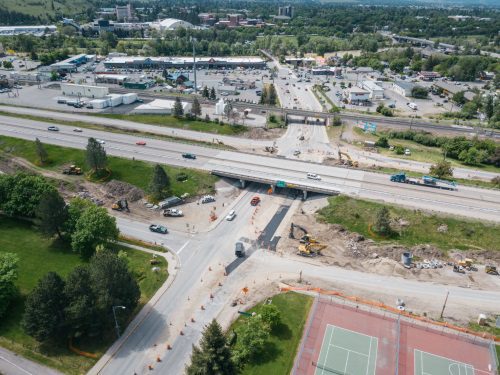 As reported by the AASHTO Journal: https://aashtojournal.org on August 24, 2020 - in Awards, News

Thirty-one transportation projects from 27 state departments of transportation around the country earned regional recognition in the 2020 America’s Transportation Awards competition for providing solutions that increase safety and save lives, make infrastructure more resilient, while improving the quality of life for their communities.

[Above photo by the Montana DOT.]

“The people who planned, engineered and built these projects deserve recognition for the positive impacts they have provided through these investments in local communities,” said Patrick McKenna, director of the Missouri Department of Transportation and the American Association of State Highway and Transportation Officials 2019-2020 president.

“Their work represents a dedication to connecting people and improving local economies while implementing creative solutions,” he added.

Broken down by region, the winners are:

The three highest-scoring projects from each regional competition earn a place on a “top 12” list of projects that will compete for the national Grand Prize – selected by an independent panel of industry judges – and the People’s Choice Award, which is selected by the general public through online voting.

Those top national winners each receive $10,000 cash awards that will be donated to a charity or scholarship of their choosing.

Online voting for the People’s Choice Award began in August, with the top 12 national award winners to be announced later this year.