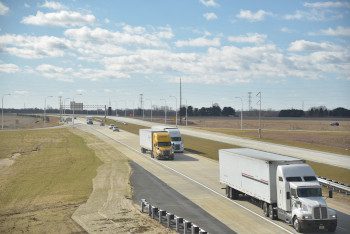 The Delaware Department of Transportation (DelDOT) earned regional recognition in the America’s Transportation Awards for the US 301 Mainline Project which opened to traffic in January 2019.

In the America’s Transportation Awards competition sponsored by the American Association of State Highway Transportation Officials (AASHTO), AAA, and the U.S. Chamber of Commerce, state DOTs compete in three categories: Quality of Life/Community Development; Best Use of Technology and Innovation; and Operations Excellence.

DelDOT received recognition for delivering a more reliable, well-functioning, and safer transportation system through operation solutions for the US 301 Mainline Project. The $636 million project bypasses 29 intersections and reduce congestion in the growing Middletown area while supporting approved and proposed economic development in southern New Castle County. Through its first full year of operation, more than 6.2 million trips have been made on the new US 301 mainline.

“This was a project that was decades in the making, and we are grateful to be recognized for the completed project that is the result of hard work by so many,” said Secretary of Transportation Jennifer Cohan.

“Constituents all throughout the Middletown area have experienced the benefit that the new US 301 bypass has provided and the amount of truck traffic that was once on our local roads has decreased significantly,” said 8th District Representative Quinn Johnson.

The three highest-scoring projects from each regional competition earn a place on a “top 12” list of projects that will compete for the national grand prize – selected by an independent panel of industry judges – and the People’s Choice Award, chosen by the general public. These top national winners each receive $10,000 cash awards to be donated to a charity or scholarship of the state DOT’s choosing.

The 12 finalists will be announced and online voting for the People’s Choice Award will begin in August. National award winners will be announced later this year. Visit https://americastransportationawards.org/ to learn more about this year’s nominees and to view the awards presentation.

AASHTO is a nonprofit, nonpartisan association representing highway and transportation departments in the 50 states, the District of Columbia, and Puerto Rico. It represents all five transportation modes: air, highways, public transportation, rail, and water. Its primary goal is to foster the development, operation, and maintenance of an integrated national transportation system.