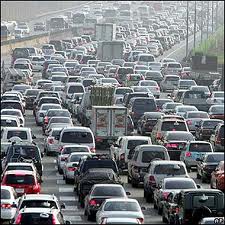 The New Cities Foundation is an international, non-profit organization dedicated to building more inclusive, dynamic and creative cities, within the context of a rapidly urbanizing world. The Foundation recently led a study on Connected Commuting, analyzing the impact of commuter-focused smartphone apps on the commuter experience. Ms Kabir will present a case study on this project at the EcoMobility 2013 Suwon congress.

Today, more than 30 million Koreans are using smartphones and 52 million are using mobile phones. The average commute time in Korea is 42 minutes, and more than 24% of Seoul’s population takes over an hour to commute to work on a daily basis.

Naureen Kabir, Director of the Urban (co)LAB at the New Cities Foundation, said: “At the New Cities Foundation, our aim is to test new urban innovations which could be scaled and adopted in cities worldwide. We led our Connected Commuting Task Force in the heart of Silicon Valley in California, with a clear goal to bring about new ideas and solutions that could be adopted in many other world cities. It’s therefore exciting for us to be coming to South Korea, and explore how the findings could have a positive impact upon Korean commuters – and indeed commuters in other bustling Asian metropolises.”

As part of the New Cities Foundation’s mission to incubate, scale and promote urban innovation, Ms Kabir’s trip to South Korea is aimed as an important step in developing and scoping the next phase of the Connected Commuting project.

During the congress, Ms Kabir will also gather information and points of view from experts from the Korean transport sector.

It is reported that 90% of Korean smartphone users stay online through various social networking apps while commuting. There are a number of transportation apps available in South Korea. However, most apps generate information from transport websites rather than providing networking platforms where commuters can interact with each other.

The New Cities Foundation’s study, published in December 2012, shows that transit apps such as Waze aimed at car users and Rodify aimed at public transport users can not only help reduce the stress level, but also help save time and the cost of fuel spent on transportation.

1. Connecting commuters through social apps improves the commute by allowing users to share or receive real-time information on traffic issues from an extended commuter community, connected commuting means that commuters have greater control over their commute and also the opportunity for them to provide a valuable service to others by sharing information.

2. The use of commuter sentiment analysis tools has the potential to help cities and local transportation authorities define their priorities. By analyzing the kinds of sentiments exchanged by connected commuters at different locations, authorities can detect and monitor particular points of frustration and plan and invest accordingly.

3. Technology plays a significant role for both connected and unconnected commuters, whether during the planning stage or the actual commute.

4. Connected car commuters tended to be happier than unconnected car commuters as a result of being able to predict their commute conditions, which resulted in less stress. Additionally, connected car commuters expressed satisfaction about their ability to help other commuters by sharing relevant and timely commute-related information.
Full information on the New Cities Foundation’s Connected Commuting study – including the Report, Executive Summary and press release – can be found at:
http://www.newcitiesfoundation.org/index.php/urban-colab/task-forces/connected-commuting/

Fellow speakers in this panel include:
Jason Chang, Professor, National Taiwan University; Robert Stüssi, Perform Energy; Hiroki Nakamura, Kyushu University; Gustaf Landahl, Head of Environment and Planning Department, City of Stockholm.
In addition to the presentation on Connected Commuting, Ms Kabir will moderate a panel discussion on Monday, September 2, looking at the ways in which ecomobility can impact upon urban regeneration.

About the New Cities Foundation

The New Cities Foundation is a leading global non-profit organization, with a vision to build more inclusive, dynamic and creative cities benefiting people and society. Its mission is to incubate, promote and scale urban innovations through collaborative partnerships between government, business, academia and civil society.
The New Cities Foundation hosts a number of leadership events on cities including its flagship event, the New Cities Summit, and other leadership events worldwide. The latest New Cities Summit took place in São Paulo, Brazil from June 4 – 6, 2013 around the theme “The Human City”. The next Summit will happen in Dallas, Texas from June 17 – 19, 2013.

The Foundation’s applied research wing, the Urban (co)LAB, manages a number of projects including Task Forces, thought leadership activities and competitions. Two major Task Forces include a pilot project on Urban E-health in Rio de Janeiro and on Connected Commuting in San Jose, California. The Urban (co)LAB also manages the annual AppMyCity! Prize for the world’s best urban mobile app, and seeks out the most talented urban innovators for the What Works series of talks hosted at the New Cities Summit.

About the EcoMobility Festival in Suwon

ICLEI, in association with UN-Habitat, invites you to fully immerse yourself in an ecomobile environment this September in Suwon, South Korea.

EcoMobility World Festival is the world’s first month-long presentation of an urban transportation culture where residents live without cars using carbon-free ecomobile transport – One neighborhood, one month, no cars.
For an entire month, 4,300 residents of Haenggung-dong neighborhood will adopt an ecomobile lifestyle, prioritizing socially inclusive and environmentally-friendly transport options, including and integrating walking, cycling, wheeling and passenging.

Suwon has invested heavily in transforming the physical environment of Haenggung-dong in addition to challenging the automobile-centric behaviors which have led to congestion and pollution throughout the metropolitan area. Alongside a neighborhood-wide leveling and re-paving of the street surface, widening and landscaping of the pedestrian pathways and the insertion of numerous pocket parks, the residents will be supplied with a suite of complimentary human powered and electric vehicles contributed by over 20 international companies.

The Festival will serve as a global showcase of future mobility for NGOs, businesses, universities, cyclist and pedestrian associations and governments throughout the month-long program including:

The EcoMobility 2013 Suwon congress will take place at the Festival from 1 – 4 September, offering a unique opportunity to attend the only transportation conference to combine challenging discussions with a real-life implementation of an ambitious EcoMobility project.