By using a green solution, the city of Houston was able to save money and prevent future damage to slopes along Buffalo Bayou. The video at the top of this page is an interview with Charlie Penland, P.E., senior principal for Walter P. Moore & Associates, the project’s engineers of record.

Houston’s Buffalo Bayou runs through downtown and right along the theater district—home to some of the most popular entertainment venues in the area, including the iconic Wortham Center for the Performing Arts. Although the bayou adds to the overall artsy nature of the area, it can be destructive during flood events. Nothing was as devastating, however, as Hurricane Harvey in 2017.

The storm dropped an average of more than 30 inches (0.76 meters)—approximately three times the 100-year 24-hour rainfall—of rain over the Buffalo Bayou watershed upstream of downtown, causing the bayou to rise more than 40 feet (12.2 meters) above the mean sea level, easily overtaking the slopes, flooding the lower levels of the Wortham Center and crashing into the base of the nearby Bayou Place complex. The current was so strong, the churn and scour of the water through the area undermined the top of the slope and the parking garage wall of Bayou Place, creating void spaces under the building that flooded the parking garage and basement. The damage was so intense, the building had to be shut down until stabilization and safety could be restored.

After the flood waters receded, the city began looking at solutions to stabilize the building and reinforce the previously vegetated slopes. 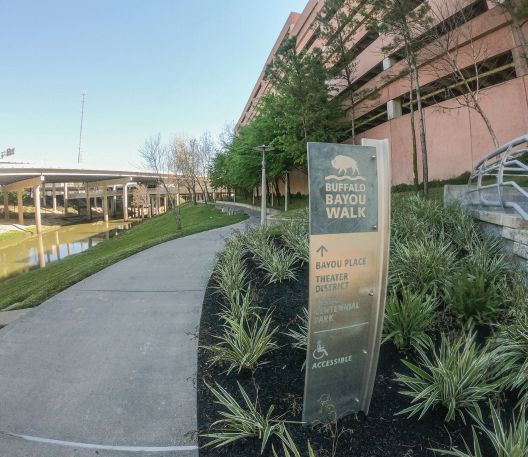 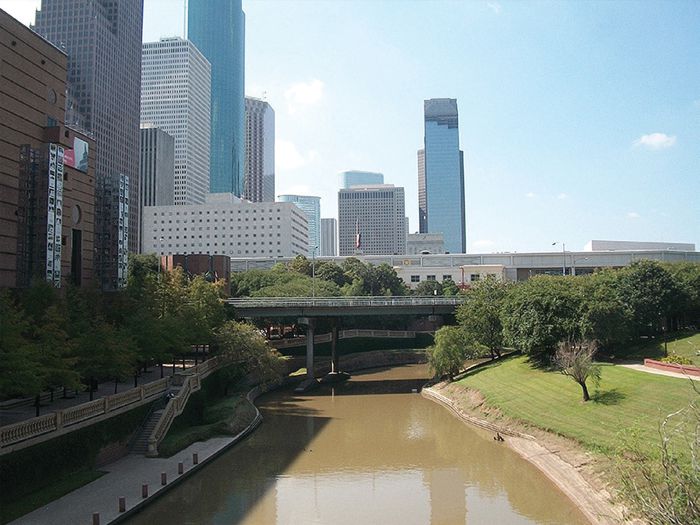 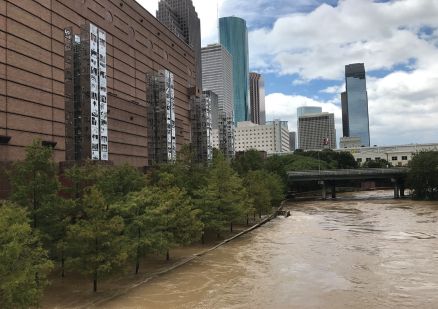 Based on the damage, Walter P. Moore and Associates Inc., the engineer of record for the Wortham Center, was asked to develop a solution to protect the slope from erosion and washouts. The bank was within the floodway and required special attention to meet the extreme flooding conditions and still serve as part of the bayou greenway. That’s when the firm approached Construction EcoServices to identify a green solution that could better withstand the rising floods from the bayou. Construction EcoServices has expertise in stormwater best practices, green infrastructure, slope stabilization and project management.

Workers hand-installed more than 3,000 articulated concrete blocks along the base of the building to 12 feet (3.7 meters) down the slope as an added layer of protection. Underneath the blocks, the team installed a Turf Reinforcement Mat to maintain consistency down the slope. 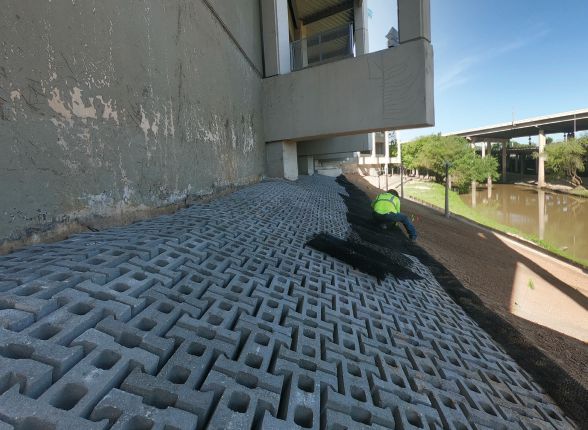 Construction EcoServices recommended installing the GreenArmor System, a reinforced vegetation solution that offers a more aesthetically pleasing and environmentally superior means of protecting high-velocity waterways and steep slopes. The GreenArmor System begins with a Futerra Turf Reinforcement Mat (TRM), which provides a permanent, lofty and open matrix. The mat then is hydraulically infilled with an erosion control product, in this case Flexterra High Performance-Flexible Growth Medium (HP-FGM), to intimately bond soil and seeds while accelerating growth and root entanglement in the TRM. This system protects against elevated levels of hydraulic lift and shear forces while encouraging turf establishment and long-term root reinforcement. 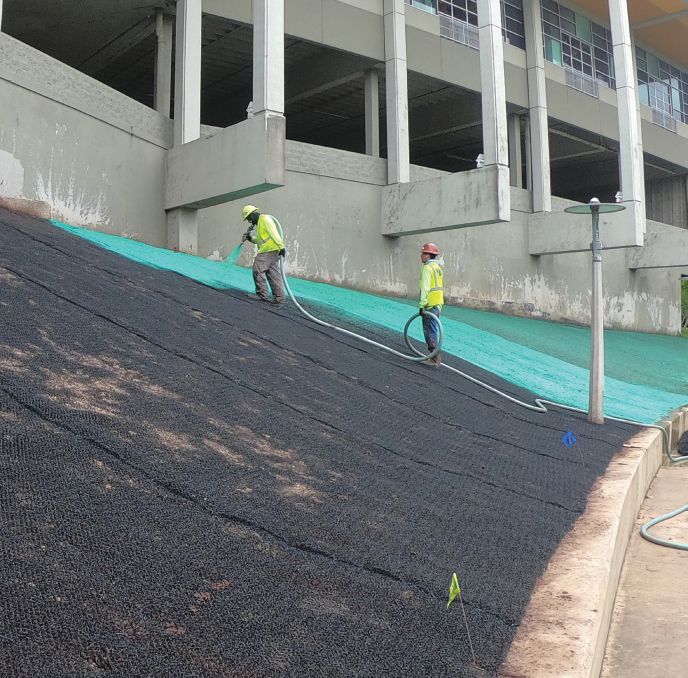 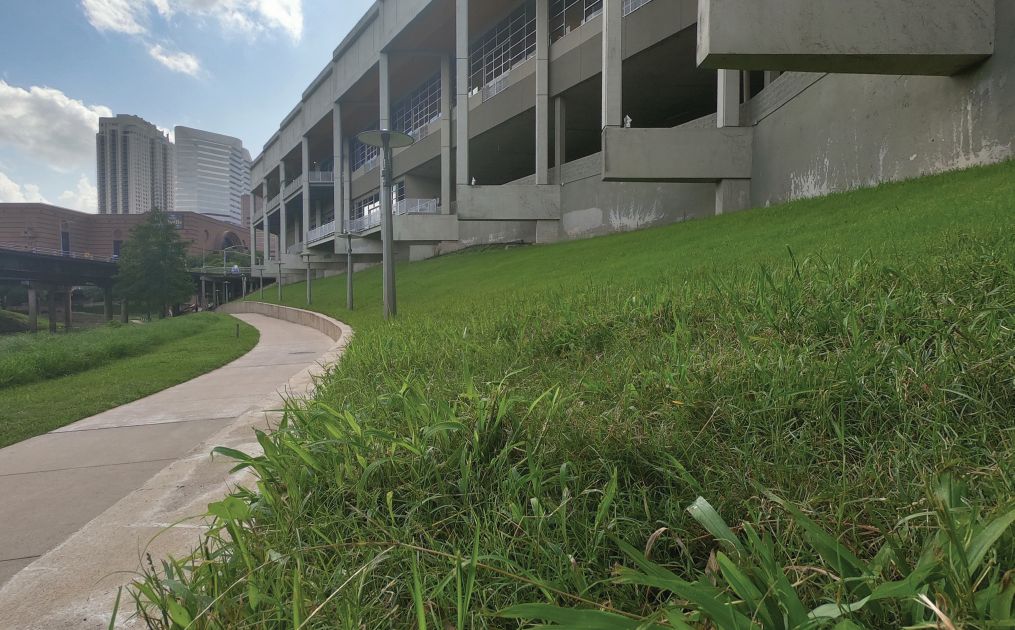 “We’ve always tried to use a green solution like GreenArmor where riprap or hard armor might be prescribed, simply because we think it’s a better solution,” says John Moss with Construction EcoServices.

Not only does the GreenArmor System offer twice the erosion resistance of natural vegetation, it also costs 30 to 50 percent less than the cost of hard armor. After hearing the proposal, the city opted to approve this solution.

Before installation of the GreenArmor System could begin, Ashton Sawing and Drilling was hired to fill in the building’s void spaces with 85 cubic yards (65 cubic meters) of flowable fill and repair the structure. After the building was stabilized, articulated concrete blocks needed to be installed along the base of the building where the building overhang restricted sunlight needed for vegetation. To bring the material in, G-Tex Construction—experts in site work, excavation and grading—helped build a roadway along the slope for the skid steer. The workers hand-installed more than 3,000 articulated concrete blocks along the base of the building to 12 feet (3.7 meters) down the slope as an added layer of protection. Underneath the blocks, the team installed Futerra TRM 7020 to keep the consistency of the TRM down the slope. This put the elevation of the GreenArmor and the articulated blocks on the same level.

As the team placed the blocks and moved along the wall, workers were bringing in dirt to fill in the road. After the blocks were installed, the slope was regraded in preparation for the green solution.

Construction EcoServices took a soil test to determine what adjustments, if any, needed to be made to ensure a more favorable growing environment for faster, more complete and sustainable vegetation. The soil test revealed alkaline soils with a pH of 8.5 and low organic matter of 1.2 percent. Construction EcoServices determined they would need to apply ProGanics Biotic Soil Media (BSM), an engineered soil media that accelerates the development of depleted soils with low organic matter, nutrient levels and limited biological activity. EcoServices also chose to apply several hydraulic mulch additives, including Aqua-pHix, JumpStart and BioPrime. Aqua-pHix decreases pH of alkaline soils, JumpStart accelerates germination and vegetation establishment, and BioPrime features slow-release nitrogen and is designed to rejuvenate poor soils and enhance long-term vegetation sustainability. 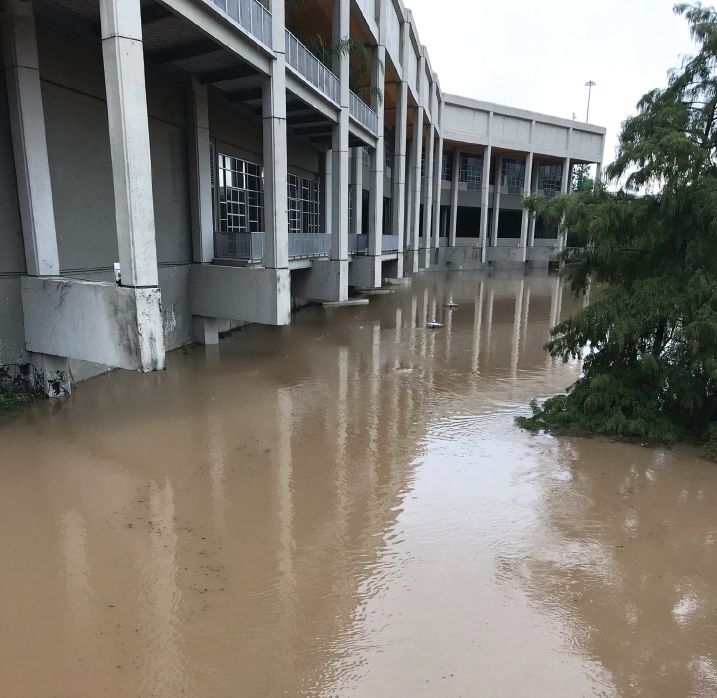 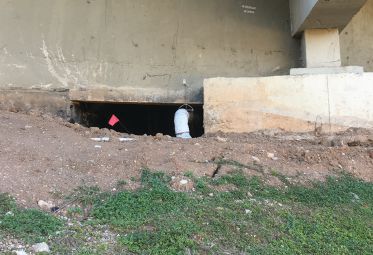 Three months after application, Tropical Storm Imelda led to flooding in the same area (top), but unlike Hurricane Harvey (bottom photo with damage), the slope was not compromised (middle).

“Biotic soil media, like ProGanics, is a gamechanger,” notes Moss. “We’ve had a lot of success with it, especially when dealing with difficult-to-install topsoil or importing topsoil.”

K-4 Environmental, the seeding subcontractor hired for the project, applied ProGanics at a rate of 5,000 pounds per acre (5,600 kilograms/hectare), Aqua-pHix at 10 gallons per acre (94 liters/hectare), JumpStart at 2.5 gallons per acre (23 liters/hectare), and BioPrime at 80 pounds per acre (90 kilograms/hectare). However, due to the bayou’s slopes ranging from 4H:1V to 2H:1V as well as the narrow access, it was impossible to park the hydroseeder along the slope to apply the products. Instead, the machine had to be parked on a bridge above the site, and the material had to be pumped through hoses from the machine. At times, the slurry had to be pumped more than 500 feet (152.4 meters). This created a unique challenge to ensure the hydraulic slurry would still properly flow through the machine.

With the soil amendments applied, K-4 Environmental then proceeded with installing the rest of the Futerra TRM 7020, anchoring it at the transition point between the articulated block and the rest of the slope. The TRM was then infilled with Flexterra HP-FGM at a rate of 4,000 pounds per acre (4,480 kilograms/hectare) mixed with Bermuda seed. In the shadier areas with the articulated blocks, K-4 Environmental filled the blocks with the soil amendments and Jasmine plants.

“The combination of the permanent TRM with Flexterra provided the added erosion control effectiveness the site needed against velocities like those Hurricane Harvey brought to the area,” adds Moss.

In follow-up inspections, Construction EcoServices reported the site had good initial germination and within weeks had strong vegetation. The team was pleased with how the Bermuda filled in and felt confident in the work.

In September 2019, three months after application, the site went through its first real test when Tropical Storm Imelda dumped 42 inches (1.067 meters) of rain in parts of Texas—more than 10 inches in the Buffalo Bayou watershed upstream of downtown Houston. The bayou once again briefly flooded over the slope and to the base of the Bayou Place garage. However, unlike with Harvey, the slope was not compromised due to the new slope protection system.

While other buildings in the area took on water, the renovated area of the Wortham Center stayed dry. Even after the flood water had rapidly receded—typically a problem for steep earthen embankments—the GreenArmor System held the slope in place and proved to be a viable solution. Moss attributes this success to the green solution.

“I don’t think there could have been a better confirmation of the design, execution and installation than having it tested by a tropical storm that soon after being built,” notes Moss. “I have to admit, I was sweating a little bit, but the outcome was exactly what we wanted, so no complaints. Without this solution, we would have a damaged slope to some degree. I think this proves there’s a green solution that can really perform well.”

To watch a short video about this project (created by Profile Products), visit bit.ly/393TWzO. You also can view a video interview with Charlie Penland, P.E., senior principal for Walter P. Moore & Associates, the project’s engineers of record, at bit.ly/32jT4Wi.