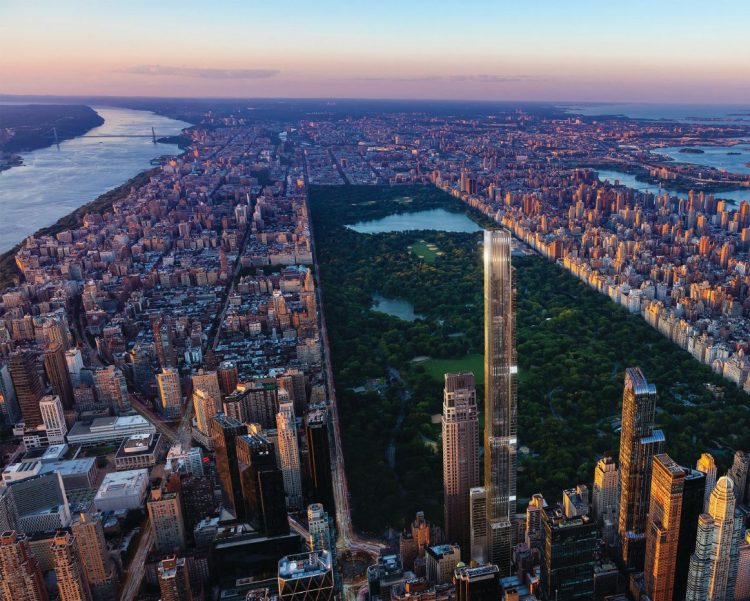 For more than a century, New Yorkers have found space by building upward. Now Central Park Tower, a new sky-piercing megastructure soaring 1,550 feet above Manhattan, is the latest in a series of super-slender residential towers to appear on the New York City skyline, as developers seek to drive value from small parcels of land in one of the world’s most densely populated cities.

The 131-story architectural landmark is located on Manhattan’s Billionaire’s Row on 57th St. and features 179 ultra-luxury residences, breathtaking views of Central Park and the surrounding area, and New York’s most-elevated private club of full-service amenities. Developed by Extell, the $3 billion tower may be the most expensive condo project. The building’s 179 apartments will start at $7 million for a two-bedroom and likely soar to nine figures for the triplex penthouse at the top of the building.

Chicago-based Adrian Smith + Gordon Gill Architecture—renowned for supertall buildings around the globe, including the Wuhan Greenland Center in China and Jeddah Tower in Saudi Arabia—designed the new cutting-edge skyscraper, which is set to become the second-tallest building in the United States (after One World Trade Center) and the world’s tallest residential building. At its base sits a 320,000-square-foot, seven-story flagship store for Seattle-based fashion house Nordstrom. Above, the elegant, slender tower soars more than one-quarter of a mile skyward, resting on a gravity-defying cantilever.

But the building isn’t just tall. Smith and Gill dedicated themselves to building energy-efficient, sustainable buildings designed in response to their natural environments. They call their architectural philosophy global environmental contextualism.

Global environmental contextualism is based on the belief that everything within the built and natural environment is connected. Smith and Gill take into consideration conditions such as location, climate, geographical, geological, cultural and social influences to achieve environmental sustainability. The approach has evolved to include passive sustainable strategies and the principle of onsite power generation by using a building’s design to harvest power from the sun, wind and geothermal conditions, thereby reducing the building’s reliance on the local infrastructure. In other words, form facilitates increased performance. 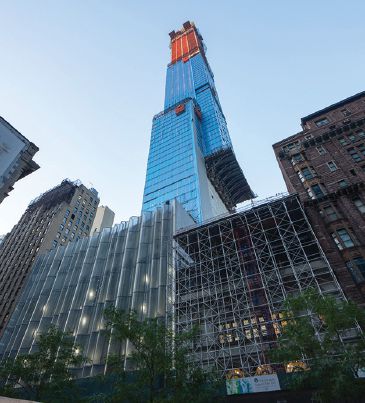 Central Park Tower’s cantilever was a key design challenge, as 2,700 square feet of each floor above 300 feet from the ground reaches out and overhangs a neighboring building on the tower’s east side.

Central Park Tower’s slender structure pushes the limits of skyscraper design. It also reflects Smith and Gill’s architectural philosophy by responding to the opportunities presented by the site’s environmental conditions and Extell’s desire to include additional high-end residential units—with views of Central Park—on the higher floors. As the tower climbs vertically, the corners set back and notch, helping to counteract wind loads and providing the ability for the floor area on each level to better achieve the desirable unit size and layouts of the upper floors while accommodating private terraces for special residential units. Structural elements are discreetly located between the residential units, resulting in floor-to-ceiling windows and unencumbered views. 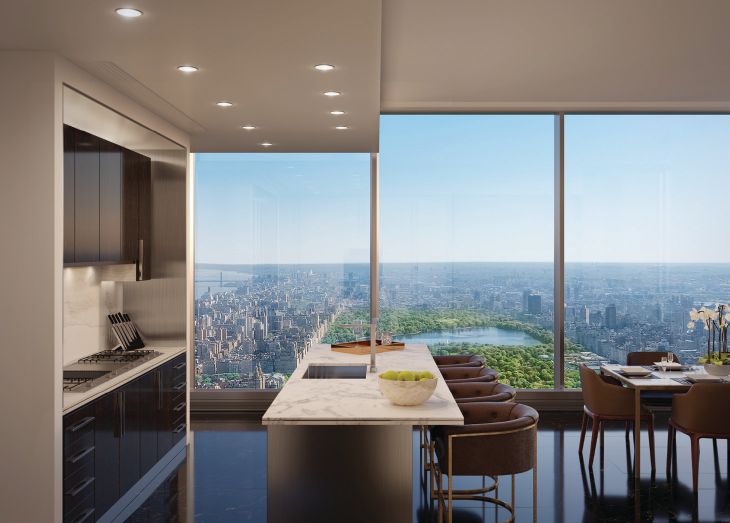 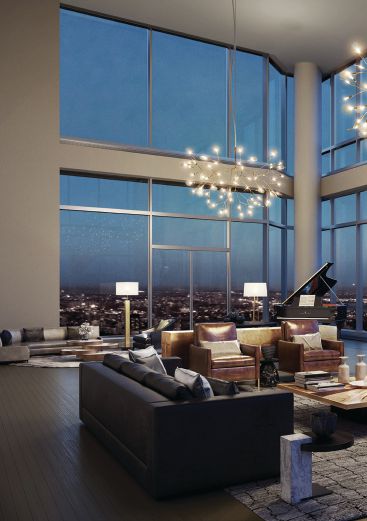 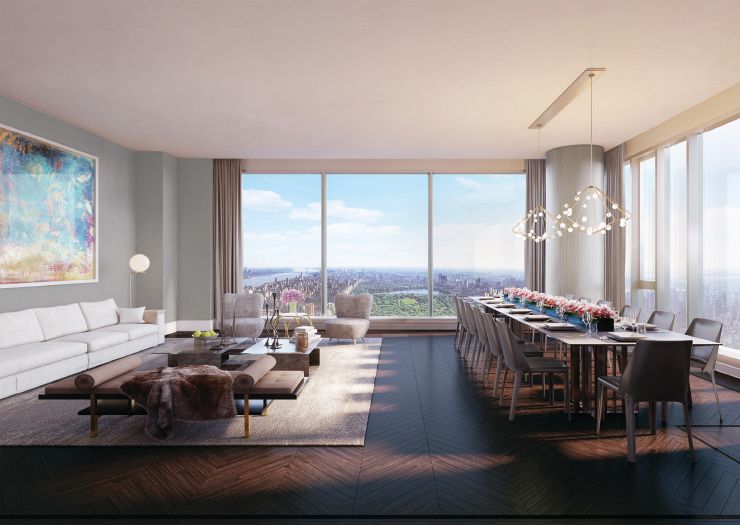 A key design challenge was the tower’s unique cantilever over the neighboring Art Students League Building 300 feet above the street to the east, giving the tower a distinct shape and functionally adding living space to the apartments on the upper floors while improving residential unit layouts, views and structural depths. The move was made possible after the developers purchased 6,000 square feet of “air rights” from the neighboring property.

Excavation at the site started in May 2014. Actual construction started in February 2015, and the building topped out in September 2019. More than 75,000 cubic yards of rock had to be removed—all the way down to the bedrock—to create the foundation, which includes a slab of concrete more than 8 feet thick. On top of this solid base is a strong concrete core from which every floor of the tower hangs. Every 20 stories, solid walls extend out from the core and connect to big concrete walls that help to support the immense load of the structure above as well as store plumbing, heating and air-conditioning units.

Because of Central Park Tower’s cantilevered structure, 2,700 square feet of each floor reach out and overhang the neighboring building. With nothing to support it from below, engineers installed huge supporting shear walls throughout the width of the whole structure. The walls channel the load of the overhanging section toward the central core. To counteract the extra weight on one side, the core is connected to a lattice of enormous steel beams and vertical columns that extend into the foundation, anchored deep into the bedrock.

To build the super-strong core, workers positioned special interlocking metal panels, called formwork, to create molds surrounding reinforced steel cages. After each mold was completed, it was filled with high-strength concrete to create a tough, rigid box with walls up to 5 feet thick. Steel bars protruding from the top of the formwork were used to join the sections together—a process that was repeated again and again all the way to the top of the building. The whole core is a rigid piece of steel-reinforced concrete tied together from top to bottom.

For the first 83 floors of the building, the team used an automatic system that lifted the formwork, steelwork and walls—level by level—quickly and effortlessly. But the construction team had to complete the formwork mold and install the final 16 floors by hand. The highest levels of the tower have the tallest ceilings and best residential views. But the walls here are much taller than anywhere else in the tower—16 feet tall rather than 12 feet tall.

The steelwork was assembled on the roof of the eighth floor. The construction team had to bend, shape and cut the steel to form cages that slot between the formwork for the core. Each bar was tied together by hand using metal wire. Precision was key, as each cage had to fit perfectly inside the formwork panels that shape the core being constructed above. Embedding steel cages inside the solid concrete core gives it greater strength. Workers lifted the finished steel cages to the crews working high above with a 14-ton-capacity crane mounted on top of the building. At the top, the tower is capped with a 4-foot-thick concrete slab that ties the entire structure together and helps keep it from swaying in the wind.

Central Park Tower’s facade features combined elements of glass, satin-finished stainless steel, and light-catching vertical and horizontal details. More than 10 million pounds of aluminum and glass were installed on the outside of the building, weather-proofing the structure against harsh winter winds. The project was designed using extensive wind, snow and ice studies conducted by RWDI.

Snow buildup in the winter was a major concern for the supertall structure, particularly regarding its protruding stainless steel mullion fins. RWDI simulated the site’s conditions on a piece of the facade, exploring many shapes and sizes to develop the best solution for minimum snow buildup. As a result, the mullions were changed from an elongated oval to a rotated oval to better shed snow and ice.

Another concern was that the tower’s east facade would cast unwanted reflections and daylighting onto the skylights of the adjacent building. Studies determined the extent of the extra reflections, depending on the material chosen. A zinc facade was chosen because of its lesser reflectivity; plus it’s a durable material with a natural finish that weathers to a matte patina through time. After the remarkable structure is completed later in 2020, more than 12,000 custom-designed glass panels will cover the building’s 620,000-square-foot exterior.