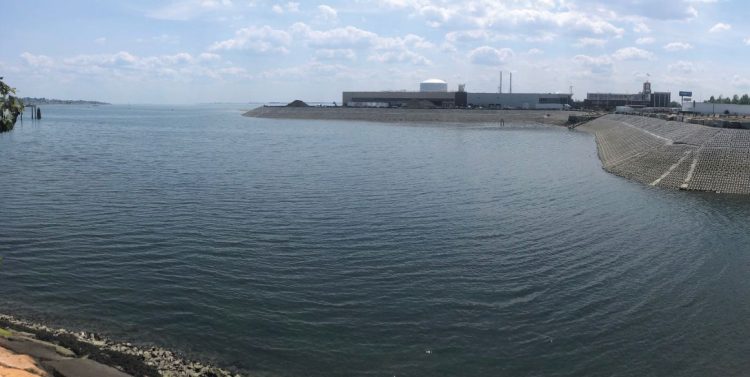 The team at GZA—a Massachusetts-based firm providing geotechnical, environmental, ecological, water and construction-management services—had their work cut out for them. They were tasked to design a stabilization project for 1,500 linear feet of coastal shoreline to protect a 14-acre 350-unit residential waterfront development—North Harbor—in Lynn, Mass.

The project (a partnership initiated in 2016 between the Minco development firm and property management company Dolben) had inherent challenges that are becoming increasingly common along coastal shorelines: erosion from wave action, poor and unsuitable soil conditions, sea-level rise, long-term durability, saltwater environment, steep slopes and post-construction maintenance considerations. Additional care was required throughout the design process to address freeze/thaw effects, abutment of existing structures, lateral/horizontal connections and the necessity for a vegetated slope above the high-tide mark.

Located north of the Boston city line, Lynn is the state’s ninth-largest municipality and, like many largely populated areas, is engaged in ongoing efforts to accommodate housing and community-revitalization needs. The tract of land earmarked for development was an abandoned industrial site that had also been home to a car dealership. The site’s unsuitable soils—containing organic and clay deposits—resulted in long-term settlement of a nearby stone revetment, causing the contact between the revetment’s stone to be lost and resulting in its poor performance.

Soil conditions are key to having a solution that won’t be jeopardized by any short- to long-term differential settlement. Anders Bjarngard, P.E., principal for GZA, knew his team needed to consider a system that was more tolerant of settlement.

The Lynn project symbolizes a response to the many challenges engineers, developers and contractors will face going forward along coastlines, especially in the Northeast. According to the U.S. Climate Resilience Toolkit developed by the National Oceanic and Atmospheric Administration (NOAA) and other agencies, coastal erosion in the United States is responsible for some $500 million per year in coastal property loss, including structural damage and loss of land. The federal government spends an average of $150 million annually on beach nourishment and other shoreline erosion-control measures. Sea-level rise as well as storm frequency and intensity will cause increased coastal erosion.

Along the Northeast, coastlines have risen approximately 1 foot since 1900—a rate exceeding the global average—with regional land subsidence poised to also set records. More than any other region, the Northeast has experienced a greater increase in extreme precipitation, with an increase in excess of 70 percent coming through very heavy weather events between 1958 and 2010, with expected frequency as the century progresses. The frequency, intensity and duration of heat waves in the region—a driving factor in earlier snowmelt—also is on an upward trajectory going forward.

“Our design did consider the impacts of climate change with sea-level rise, and increased intensity and frequency of storm events,” adds Bjarngard.

Bjarngard, who has expertise in government projects, notes that a significant issue regarding shorelines is balancing an engineered solution that provides durability, confidence, low maintenance costs and can be permitted.

He’s cognizant there’s a trend among regulators to use softer solutions whenever possible, “but when an engineer is going to put a stamp on a set of drawings, it has to provide a solution that’s going to stand the test of time. It’s challenging, to say the least, to use those softer solutions.” Rather, such projects call for a balanced approach.

“The ability to get a project permitted with a resilient design is key when you’re working on the shoreline,” notes Bjarngard. “There are a lot of different regulatory agencies involved. It’s very difficult to navigate through those and come up with a design that can be permitted and resilient.”

The GZA team studied how ACB systems are analyzed to make the appropriate choice. They applied the Pilarczyk method, which is utilized globally to design revetment stability in wave environments, as not every solution works within the bandwidth of all wave heights.

Following an extensive examination of all the options and factors of consideration, the team chose 47,629 square feet of Contech’s ArmorFlex Class 70 Block and a Half (BAAH) ACB system. Commonly used for hard-armor erosion control in wave attack and other severe hydraulic applications, ArmorFlex is designed to be a flexible, interlocking matrix of cellular concrete blocks of uniform size, shape and weight.

GZA also considered historical data from previous ArmorFlex installations to ascertain its effectiveness and if any challenges could be properly mitigated. Of particular concern was how durable the solution would be in a saltwater environment and a freeze/thaw cycle. Design time durability for a concrete structure is 50 to 75 years in saltwater freeze/thaw conditions, notes Barrie King, P.E., area manager for the Northeast for Contech’s hard armor products.

A major issue in selecting an ACB system over a traditional stone revetment was that the navigational channel at one portion of the site would need to be dredged in the future to clear the channel.

“Stone revetment systems rely on toe support,” says Bjarngard. “We couldn’t guarantee that in that area. We just didn’t have enough room to stay out of the navigation channel. That was another factor in the selection process.”

Considering All Aspects of Design

Dan Priest, P.E., general manager of Contech’s hard armor division, notes the resiliency of a design comes down to considering design conditions such as the area’s historic waves and buoy readings, and coming up with a solution that considers changes over time while applying an appropriate factor of safety to meet future challenges.

“We did some very detailed numerical modeling,” adds Bjarngard of his predictive analysis. “We started with the buoy data and modeled how those waves change as they get closer to the shoreline. We took into consideration all the different angles and depth to get more-accurate determination of the wave size. 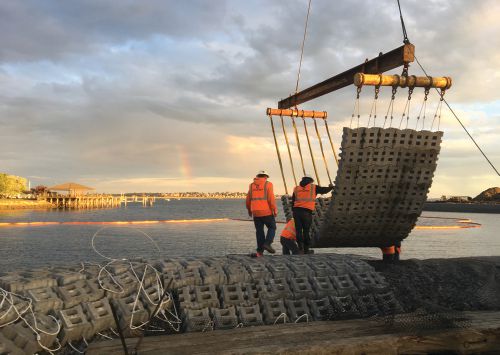 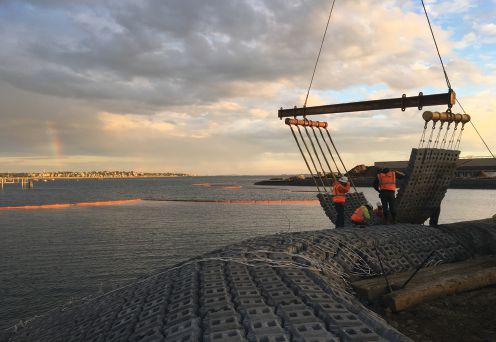 Workers lower and adjust a 20-foot-long upslope section of articulated concrete block mattress into place via crane near the northern limit of the shoreline.

“Those models are based on climate meteorological data of record, but also on numerical modeling done by the U.S. Army Corps of Engineers,” he explains. “They provide results offshore from our site. We can start with those and then model them with a denser grid numerical model.”

King says Contech’s ArmorFlex was chosen from among the options that abound in the marketplace because of its technical record. ArmorFlex had been extensively tested under wave-attack conditions in the hydraulic laboratory at Delft University of Technology in the Netherlands to fully understand the hydraulic capacities of the revetment. This was crucial in determining that the revetment system could withstand similar conditions on the Massachusetts coastline. 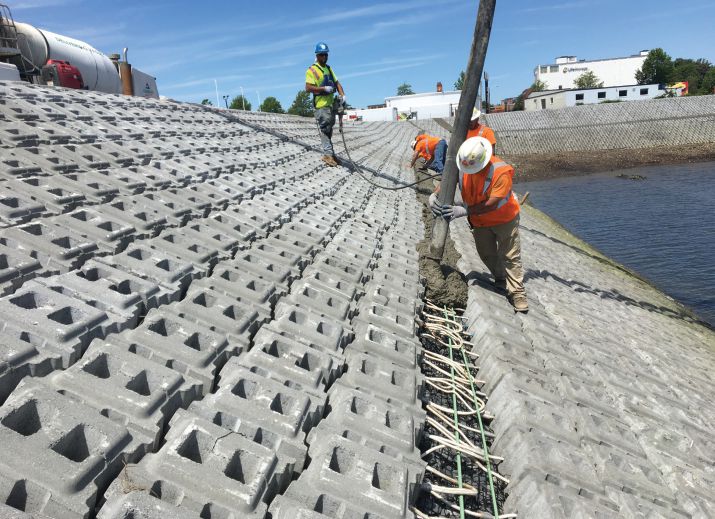 Workers install concrete via a pump truck into the horizontal seam between upper and lower mattress sections along the shoreline’s longest and steepest span.

The project began in 2016 with initial design criteria considerations, and went to bid in 2018. The contractor mobilized in the middle of March 2019 to begin the site clean-up and preparation, and the project was complete in mid-July 2019. The installation of the ACB lasted a month from mid-May to mid-June 2019 and was done expeditiously with 85 loads of material over 16 days, following a design and permitting approval from the Massachusetts Department of Environmental Protection.

Just as the design and material choice is critical to the success of a project, so is the ability of the installation contractor to properly execute the plans. Charter Contracting Company provided the installation and had put forth Contech’s ArmorFlex as the most-effective solution.

The tide was a significant factor in this installation, notes Bjarngard.

“We have a 9-foot tide here, and these blocks extended below mean low water,” he adds. “The contractor had to take the tide into consideration, and that dictated the schedule to some degree. Contech was able to meet our footprint by using two rows of mats, and we were thinking it might have to be three. That sped up installation quite a bit.”

In the final iteration and for the majority of the coastline, 30- and 20-foot mattresses were proposed to the full length downslope. Utilizing these two mat sizes enabled the contractor to eliminate an additional seam, which would have been present in a three-mat layout vs. a two-mat system and was critical in dealing with the 9-foot vertical and complexity of the tide.

Priest points out that the project entailed a relatively significantly steep embankment up to 2H:1V and entailed the challenges of placing heavy 30-foot mats with a total lift in excess of 19,000 pounds with the lifting bar as well as accommodating variable lengths to adjust to the change of slope along the shoreline. 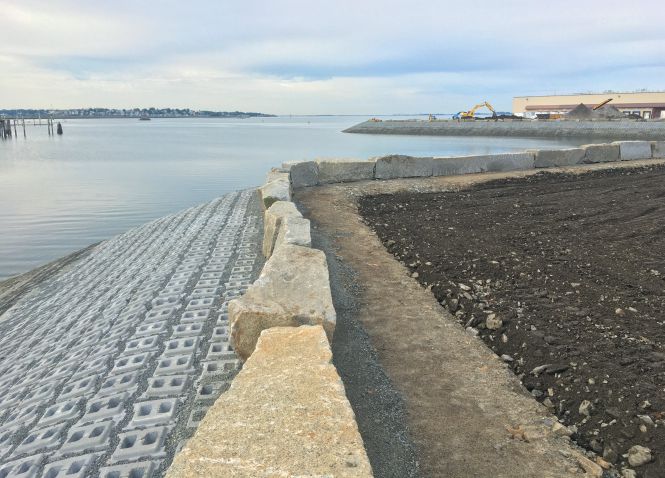 A photo shows Lynn Harbor post-construction, before vegetation is in place.

King was onsite from the start to provide guidance throughout installation, noting that every installation is site-dependent regarding learning curves to get the job done correctly and within a timely fashion.

ArmorFlex mats are manufactured in custom sizes and fabricated with revetment cables to enable ease of handling and rapid installation.

“The contractor learned a few lessons about how to hitch them up appropriately to set them in the correct position,” says Dan Sanfilippo, a GZA engineer involved in oversight during the construction phase of the project. “Very early on, it became apparent a surveyor was needed onsite full time to ensure that each section was set in its appropriate position and wasn’t skewed from being square to the slope.”

“It was a quick installation for this material size for the quantity we’re talking about,” says King. “They worked a double shift, placing mattress revetment during the day and at night confirming geopoints and doing surveys. They had a very tight survey and were monitoring any potential movement of mats.”

That pace proved efficient in executing the project under the timeline, he adds.

Alasdair Cunningham, project manager with Charter Contracting Company, notes that his company’s crews were able to install the system under difficult conditions and on a limited project schedule. Another credit to the project’s success: teamwork among all involved entities. 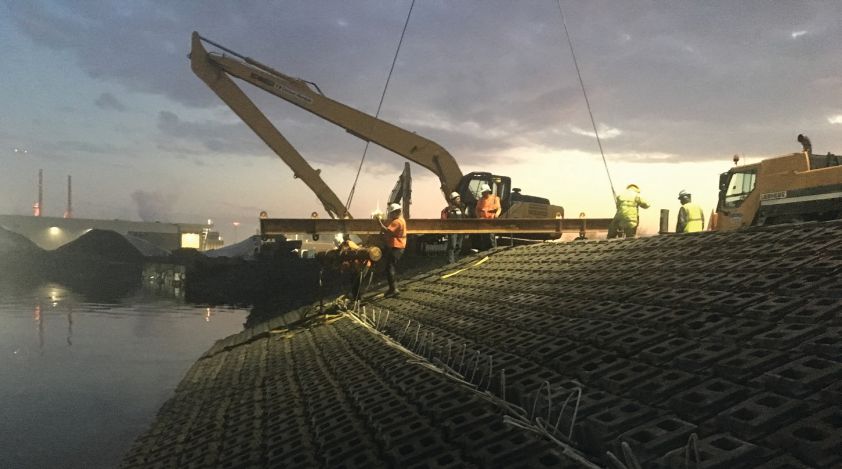 “A lesson I learned early on in the construction world—and it proved true here—is the partnership aspect: having confidence in each other makes for a good project,” notes King of the process that starts with engineering, works through development and finishes with construction toward a common goal. Bjarngard concurs.

“We were very fortunate on this job because it was a publicly bid job,” he says. “And we received a qualified contractor in Charter, and they chose a reputable block manufacturer in Contech. We did have a great team. It was a major factor in the success of the project.”

A subsequent phase in the project to satisfy the permitting process entails planting native salt-tolerant species in early spring in the open areas of ArmorFlex for aesthetic reasons. Custom starter-plant containers from a local nursery will match the ACB system’s open cells where natural grasses and flowering plants were specified.

Maintenance always is a prime consideration as part of the long-term costs.

“A developer is going to want to minimize as much maintenance as possible, particularly on the shoreline, which could involve permitting,” notes Bjarngard. “This particular system has very little maintenance associated with it.”