/ Articles / Future Forward: Most People Want to Help You

Future Forward: Most People Want to Help You 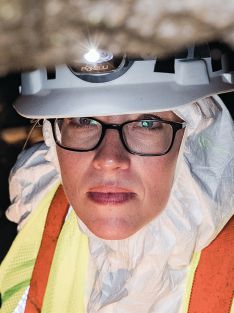 Erin Rothman is the founder of StormSensor and an environmental consultant.

She didn’t invent the technique, but Rothman is finding success launching and building a new infrastructure sensor company, StormSensor, via a commitment to a simple concept: asking for help.

An extremely shy person by nature, she has steadily overcome her fears by progressing from asking simple questions to arranging short meetings over coffee to scheduling multiple meetings in a day to holding major meetings with large city governments and venture capitalists. All the while, she’s asking questions and seeking help where needed.

“I constantly get outside my comfort zone,” Rothman notes. “People need to ‘get out there.’ Instead of saying, ‘I wish I could do that,’ just go do it.”

While an environmental consultant at a company based in Seattle, her firm realized it was losing money whenever it enlisted a stormwater team to check runoff during storms. Although it would be raining at their office and indicated it was time to collect a sample, the stormwater team would find it wasn’t raining in the collection basin, and their wasted time could therefore not be billed.

Rothman asked why they didn’t have a sensor that could send notifications when it was actually raining, and she was told that no such sensor existed and she should invent one. She joked that she would, and then spent the next several years actually working on a sensor that could do that and much more.

While developing this project, she was living in San Francisco, where everyone seemed to be involved in a “startup” of some type or another. There it was easy to ask questions of those developing startups as well as the startup incubators and accelerators in the area. She even took a product management class and won the “best product” competition, further increasing her confidence.

Although the original idea was a complicated sensor that could do many things, from talking to cities and consultants she learned they didn’t need that much information to make better decisions. Most cities’ stormwater systems are old and beyond their intended capacity, and most model what should be happening as opposed to monitoring what’s really happening.

“Talking to cities, I realized they don’t even know how much water moves through their system,” Rothman notes. “They told me they didn’t need all the parameters. All they wanted to know is flow and maybe temperature.”

That meant StormSensor could address a larger market with a greater need with a broader and more-valuable vision, and it could do so at a lower cost with sensors that didn’t have as much power draw and could be distributed over a wide area.

With the business case refined, Rothman still needed to build a product. StormSensor sponsored a senior engineering capstone in 2016 at the University of Washington, in which six engineering students were tasked to develop a sensor that could get as much data from as wide an area as possible, and it had to be pulled from underground.

To record volume and flow, StormSensor needed depth and velocity sensors. Off-the-shelf sensors were expensive, so the team designed their own. The first prototype was 2 feet long and 8 inches tall, but the current model now fits in the palm of your hand.

“And then, of course, the software is taking on a glorious life of its own now that we have all this data,” adds Rothman.

Like any new product, it can only be successful if it works and helps customers. Rothman points to two cities, Jersey City, N.J., and Memphis, Tenn., as two successful case studies.

“Jersey City was our very first customer, when our sensors were 3D printed and epoxied and screwed together and held together with a ribbon cable,” she explains. “It was awful and embarrassing, but they worked with us, and then they bought more, and now we’re deploying this network across the city.”

Jersey City has a $700 million plan to separate their combined system and install new storm drains, so StormSensor was enlisted to monitor the city’s combined sewer outfalls to see how much raw sewage is being discharged into the Hackensack and Hudson rivers.

In Memphis, the city was flooding more than its modeling expected, and StormSensor helped reveal that when the Mississippi River reaches a certain level, gates open and allow the river to flow into its storm system for storage, significantly reducing its capacity. Now Memphis monitors the river and closes the gates when a storm approaches.

StormSensor’s success so far lends further credence to her advice to future entrepreneurs: “Don’t be afraid to ask questions ever, and if someone refuses to answer, then you don’t want to talk to them anyway, because most people
really do want to help you.”