/ Bridges / SDOT: Our Precautionary Plan to Repair and Preserve the West Seattle Low Bridge to Ensure it Continues to Play Essential Role

SDOT: Our Precautionary Plan to Repair and Preserve the West Seattle Low Bridge to Ensure it Continues to Play Essential Role 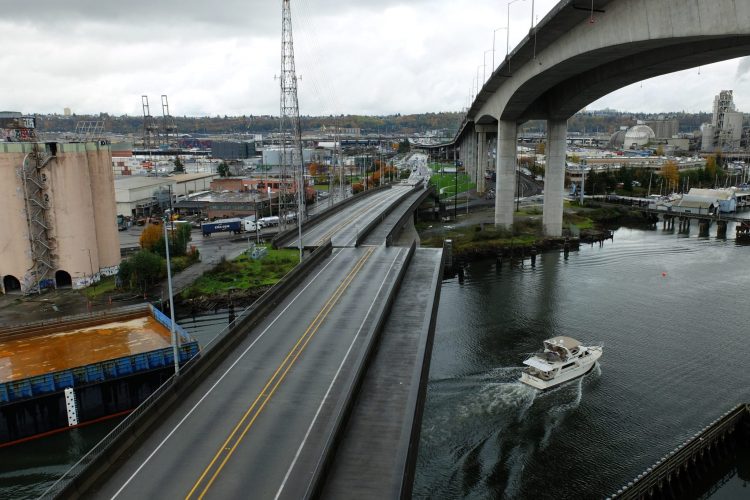 While we have written a lot about the West Seattle High-Rise Bridge which is undergoing stabilization measures as we continue to analyze repair or replacement options, we have also been continuing to focus on creating a precautionary plan to repair and preserve the West Seattle Low Bridge, also known as the Spokane St Swing Bridge, for years to come.

We need to take extremely good care of the of the Low Bridge and have fast-tracked numerous precautionary safety, maintenance, and strengthening measures to ensure that we can rely on this bridge to play its outsized role today and in the many years ahead. As such, we have and will continue to take many proactive steps to ensure that we can count on the Low Bridge to carry buses, emergency vehicles, and essential freight. This includes addressing necessary maintenance issues as well as actions taken out of an abundance of caution, and today we want to share some of those important details with you.

Completed in 1991, the West Seattle Low Bridge is a concrete swing bridge with internal post-tensioned steel support cables similar to the ones in the high-rise bridge. The Low Bridge consists of two 7,000- ton, movable sides which use a hydraulic mechanism to swing open and allow ship traffic through. Each of the two halves are supported on either side of the Duwamish River.

We have been taking diligent care of this bridge, including replacing one of the cylinders which allows the bridge to swing open, and removing built-up silt in one of the bridge piers.

Like all concrete bridges, the Low Bridge was designed to move over time in response to traffic, temperature conditions, or seismic events. While it seems counterintuitive to think about concrete flexing and moving, this is what allows the bridge to withstand the test of time.

It is normal and expected that all concrete bridges will eventually form cracks which help relieve stress from this movement. Small cracks were first seen in the Low Bridge in the late 1990s and have been continually monitored and tested to ensure that they do not affect the bridge’s structural integrity.

Fortunately, these cracks are only a few inches deep and are not progressing at rates remotely like the sudden crack growth that led us to close the High-Rise Bridge. We are confident that the Low Bridge’s crack depth, growth patterns, and type do not indicate that the bridge is unsafe for live traffic.

We have no reason to think that the Low Bridge is in any imminent risk, but because the bridge now plays such an over-sized role in our transportation system, we have developed a forward-thinking plan to strengthen it further and have been taking numerous precautionary steps to monitor and care for this bridge since the closure of the High-Rise Bridge.

We have been conducting in-person inspections at least once a month (often more frequently), way above the federal standards calling for inspections every two years.

Additionally, when our contractor was installing an intelligent monitoring system on the High-Rise Bridge, we asked them to also install the same type of system on the Low Bridge to collect 24/7 real-time data on the bridge’s condition as an extra safe guard. This helps track bridge movement throughout the day and how the bridge reacts to traffic and to thermal variations.

Finally, we conducted many of the same types of non-destructive testing performed on the High-Rise Bridge, and have confirmed that, unlike the High-Bridge, cracks do not extend through the Low Bridge girder walls.

These fast-action steps ensure that SDOT is monitoring the health and needs of the Low Bridge closely so we have immediate, acute and real-time knowledge of what actions we might have to take proactively to preserve the health the Low Bridge.

We have fast tracked many proactive repairs on the Low Bridge.

Just as we are closely monitoring the Low Bridge, we are also proactively strengthening and repairing it.

As we’ve previously shared on this blog and reported to Seattle City Council (see 53m:30s), we have fast-tracked and completed several proactive maintenance projects on the Low Bridge, including diagnosing issues with the bridge’s control system, replacing malfunctioning pedestrian gates, and repairing pavement near the bridge.

Another step will be to lower the speed limit on the bridge from 30 mph to 25 mph, which was already planned as part of a citywide goal to lower speeds throughout Seattle for public safety, and will not affect how many vehicles can travel over the bridge.

Lower speeds also have the benefit of reducing the stresses from vehicles traveling over the bridge, especially heavy trucks. When heavy vehicles travel over the bridge, they cause vibrations like a person jumping up and down on a diving board. The faster a vehicle is driving, the more intense vibrations and greater stress on the bridge structure. Slowing a large truck down by even a few miles per hour can reduce this strain and help maintain the bridge’s structural integrity.

We have recently completed a robust structural analysis to evaluate the bridge’s ability to carry extremely heavy trucks, also known as a load-rating assessment.

Preview(opens in a new tab)

We used a heavy truck to “crawl” along the bridge while monitoring to see how the bridge responds to heavy weight.

The results of this analysis confirm that the precautionary measures described above are necessary. The bridge’s structural condition was rated in a category which requires us to either invest in bridge repairs or enact strict restrictions on heavy vehicles driving over the bridge. Fortunately, the repairs we have already taken, or identified for the near future, go above and beyond federal requirements.

Because we are investing in these repairs, we will not need to place new restrictions on nearly any vehicles using the Low Bridge. We will only need to add weight restrictions for some trucks carrying weight loads over 207,000 pounds, which is about 20% heavier than a 737 jet (the technical term for this is Over-Legal 2 or OL-2 class trucks). These extremely heavy trucks are already required to obtain a special permit from the City and State to carry loads so far above the maximum legal weight limit. This will only affect about a dozen trips per week, and will not affect any emergency vehicles, buses, or freight trucks within legal weight limits.

In the coming years, we are also planning larger repairs and strengthening measures to ensure that the Low Bridge remains healthy for years to come.

This will include maintenance on the center-lock system to reduce the impact and stress of heavy vehicles transitioning between the two halves of the bridge.

We are planning on strengthening the Low Bridge, which will likely include installing carbon fiber wrapping to the lower bridge and/or installing additional steel post-tensioning cables. These are similar to the strengthening technique planned to address much deeper and more severe cracking in the High-Rise Bridge, but in this case it is purely as a precautionary measure to ensure the long life of the Low-Bridge.