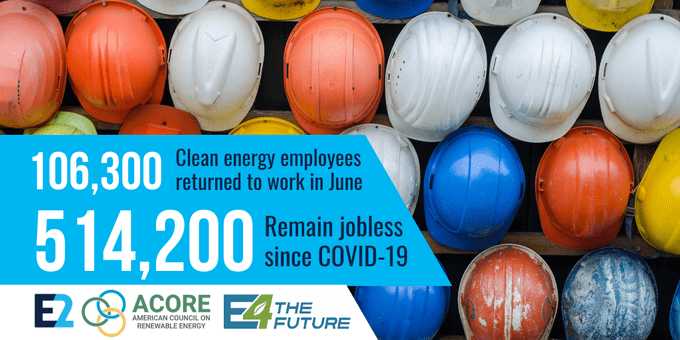 WASHINGTON  – As the U.S. economy began to reopen in June, some employees returned to work in the clean energy sector, which had been reeling from three months of devastating job losses in the wake of the COVID-19 pandemic, according to the latest analysis of federal unemployment filings from E2 (Environmental Entrepreneurs), E4TheFuture and the American Council on Renewable Energy (ACORE).

About 106,300 jobs were added back to the economy by clean energy companies in June, according to the analysis by BW Research, leaving over half-a-million clean energy workers (514,200) out of work since March. In all, clean energy employment is still down 15 percent from the start of the year, when nearly 3.4 million Americans worked in renewable energy, energy efficiency, clean vehicles and fuels and other clean energy sectors.

While the June jobs improvement is an encouraging sign of clean energy’s ability to quickly put Americans back to work, resuming a robust recovery in one of the nation’s biggest employment sectors anytime soon remains unlikely without direct action by Congress. Only one out of every six clean energy jobs lost since March returned in June, and as federal Paycheck Protection Program (PPP) funds are exhausted and states are forced to close businesses again in the face of COVID-19’s resurgence, more layoffs could be imminent without congressional action. According to the analysis, as many as 2.3 million clean energy workers are employed by small businesses that received PPP loans.

Other troubling trends include a sharp increase in permanent job losses, rising initial weekly unemployment claims, and COVID-19 cases spiking in states with some of the largest clean energy workforces, according to the analysis.

Before COVID-19, nearly 3.4 million Americans worked in clean energy occupations – renewable energy, energy efficiency, grid modernization, clean vehicles and fuels – in every state. That’s more people than work in real estate, banking, or agriculture in the U.S., and three times the number that work in fossil fuels. Clean energy jobs had been growing 70% faster than the overall economy from 2015-2019, according to E2’s Clean Jobs America report.

“We sputtered back a bit, at least temporarily, but Congress really needs to put some gas in the tank if we’re going to make it over the high hill to real economic recovery. The best way to stimulate a robust and lasting economic recovery, we know, is by focusing on clean energy in any forthcoming economic stimulus. But we’re running on fumes and running out of time. Congress must act now.”

“With an encouraging uptick in clean energy jobs for early June nationwide, it would be easy to raise hopes among our stakeholders — but it’s likely they would be false hopes, given the many warning signs. This industry needs help short-term, so that its workers can help our country long-term. The value of clean energy deployment requires that it move forward rapidly.”

“While last month’s numbers show a clean energy job market that stopped its free fall, we are by no means out of the woods yet. This report shows more than 82,000 in the renewable workforce remain unemployed, and thousands of jobs continue to be at risk. To help mitigate these ongoing pandemic-related impacts, the renewable sector is asking Congress to include commonsense emergency relief provisions like temporary refundability and a delay in the phasedown of renewable energy tax credits in the next round of COVID legislation.”

“The topline number shows some short-term improvement as some clean energy workers returned to their jobs in the weeks following Memorial Day, as states largely reopened their economies. The slow rate of return despite aggressive reopening, most states now pausing or reversing their reopening plans, the importance of PPP to this sector, and perhaps most importantly, the rapid increases in the permanent unemployment – they’re all troubling issues that are major threats to a real recovery.”

State and Local Highlights from June:

The data analyzed for this report did not include workers who had their hours slashed and are now significantly underemployed.

The analysis expands on data from the 2020 U.S. Energy and Employment Report (USEER) produced by the Energy Futures Initiative (EFI) in partnership with the National Association of State Energy Officials (NASEO), using data collected and analyzed by the BW Research Partnership. The report was released in March 2020 and is available at www.usenergyjobs.org. E2 and E4TheFuture are partners on the annual USEER, the fifth installment of the energy survey first released by the Department of Energy in 2016 and subsequently abandoned under the Trump administration.

For policy recommendations from E2 on building America’s economy back better and faster through clean energy visit E2’s Build Back Better homepage.

Founded in 2001, the American Council on Renewable Energy (ACORE) is the nation’s premier pan-renewable organization uniting finance, policy and technology to accelerate the transition to a renewable energy economy. For more information, please visit www.acore.org