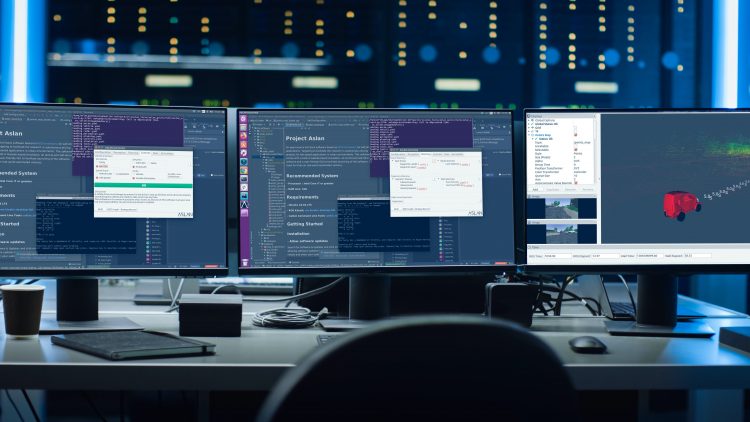 Oxford, UK, 01 July 2020. The potential social, commercial and environmental benefits of autonomous mobility that have the capability to transform gridlocked and polluted cities are not being realised quickly enough.

So says Project ASLAN, a new international not-for-profit collaboration between commercial enterprise, leading technology universities, transport authorities and self-driving hardware and software engineers drawn from around the world that aims to solve this problem.

To accelerate the progression of driverless technology, Project ASLAN today launched an open-source and rapidly deployable self-driving software platform. The free and open software stack has been launched expressly to foster engineering collaboration. The platform provides mature and stable code combined with plug-and-play ease of use, offering real-world self-driving capability validated by public highway trials as well as complete simulation capability for users without access to driverless vehicle hardware.

Project ASLAN has identified the high investment demands required to pursue end-to-end driverless technologies presents a clear barrier to progress. The project has set itself the ambition to remove these barriers to entry and prioritise the benefits of driverless vehicles for metropolitan and low-speed use cases where the benefits are the greatest and a collaborative approach is already determined by the involvement of multiple public agencies and private companies.

By focusing on a more defined operational domain based on slow speeds in cities as well as embracing an open-source approach, Project ASLAN opens up a smaller problem to a far larger group of collaborative engineering capability from across the world.

From today at www.project-aslan.org, engineers can freely download an open-source resource enriched by software contributed by the founders and augmented with data from 22 autonomous vehicles currently deployed in a variety of trial use-cases in locations ranging from Hong Kong to the UK.

Mike Potts, CEO of StreetDrone, one of the founder members of Project ASLAN said, “The fundamental objective of Project ASLAN is to focus the power of engineering collaboration on a very defined controlled speed urban use case to enable fast deployment of self-driving solutions. The group that has set this initiative underway welcomes new companies and individuals who share ASLAN’s ambition as the promise of autonomous vehicles has been unfulfilled for too long. Collaboration and Project ASLAN are the remedy for that shortcoming.”

Professor Hai L. Vu from the Institute of Transport Studies at Monash University in Melbourne said, “Open-source has been an approach that has led to quantum shifts in development, from the complete re-definition of how the world manages servers using Linux to the huge strides Open Robotics have achieved in robotic technology with ROS. I am confident that ASLAN will achieve the same success by catalysing the progression of slow-speed driverless solutions for the world’s cities.”

Project ASLAN is aligned with the World Economic Forum Guidelines for City Mobility paper published in March 2020 that set out the ambition for cities and communities to lower emissions, improve safety and increase affordability & accessibility of transport networks based on a first principle of data sharing and collaboration.

The free and open-source solution launched today at project-aslan.org is a complete self-driving platform that is easy to install, fully documented and contains a stable collection of state-of-the-art software packages. With its own graphical user interface enabling plug and play deployment, the tooling is intuitive and has been designed by engineers, for engineers and includes a set of video tutorials and quick start guides with a promise that users can install and run an autonomous vehicle or an integrated simulation in under 30 minutes.

ASLAN utilises the ROS framework, the power behind millions of robotics solutions in many applications, providing the estimated user community of up to 16,000 automotive and self-driving engineers and developers already using ROS with a familiar middleware solution.

Efimia Panagiotaki who leads Project Aslan’s Technical Steering Committee, said, “We have designed the ASLAN platform to be highly usable, fully functional and configurable, providing end-to-end self-driving software implementation. The modular architecture along with the deployment support provided, allows developers to build their own features on top of a stable and well-documented stack. I believe it is everything an engineer would need to commence self-driving software development and from today, it is freely available to all.”

Mark Qiu, Co-founder and COO of RoboSense, a global leader in smart LiDAR sensor systems based in China, Europe and Silicon Valley who have received multiple prestigious awards including the Audi Innovation Lab Champion and two CES Innovation Awards, said “We are very honoured to join Project ASLAN and contribute to global low-speed autonomous driving development. The project will allow us to share our accumulated knowledge with the LiDAR and autonomous driving industry to aid human safety and increase the efficiency of smart cities alongside other project members.”

Project ASLAN is an international, not-for-profit collaboration between technology companies, universities and public authorities that aims to accelerate the viability of low-speed urban autonomous transport solutions by applying open-source self-driving software to improve quality of life and prosperity for metropolitan citizens around the world