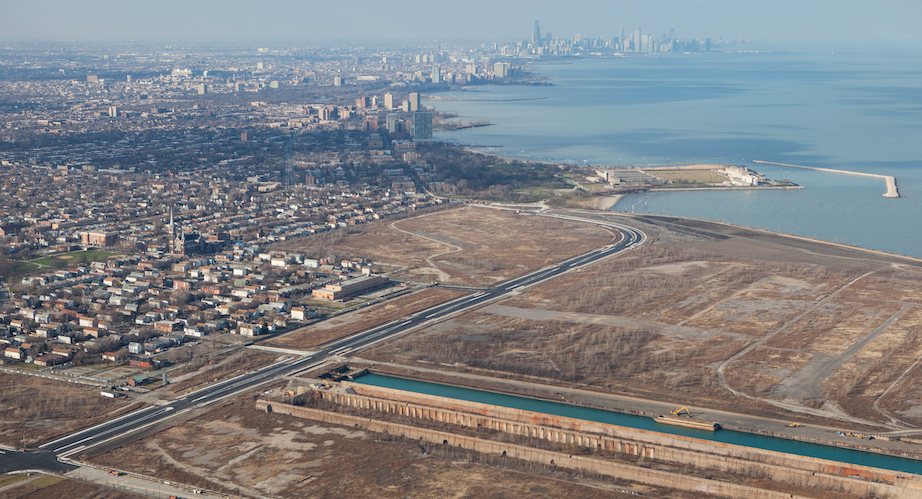 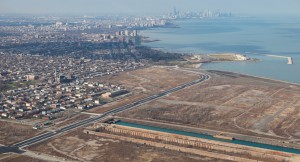 Rapid urbanization around the world is leading to the construction of real estate developments at a scale and pace far beyond human experience. Among these efforts is Chicago Lakeside Development, a 600-acre development on the coast of Lake Michigan on the city’s South Side that will eventually be home to 50,000 people and millions of square feet of retail, commercial and public space.

Planning for Chicago Lakeside will necessitate augmenting traditional tools with data and scientific computation, allowing developers to model the complex interplay between energy, waste and water infrastructures. To address this need, a collaboration between the University of Chicago, Argonne National Laboratory, the Computation Institute, Skidmore, Owings & Merrill and McCaffery Interests will develop a prototype computational framework for Chicago Lakeside Development, called LakeSim.

“Urban designers, architects, and developers have ample experience and tools optimized for single buildings or developments in the 20 to 30 acre range. But these do not scale to the 600 acres of a site such as Chicago Lakeside,” said Charlie Catlett, director of the Urban Center for Computation and Data and co-investigator on the LakeSim project. “The need to deliver sustainable and financially viable urban plans requires a science-based approach, bringing the power of computational models to city design.”

LakeSim will connect existing urban design tools with scientific computer models to create detailed simulations relevant to large-scale development. Instead of planning separately for different pieces of the infrastructure, the framework will allow developers to simulate how various designs influence the environment, transportation, and business spheres in Chicago Lakeside under a range of possible scenarios, over hundreds of acres and decades of time.

“As it stands right now, urban development is often looked at as individual components that make up a whole,” said Leah Guzowski, energy policy scientist at Argonne and LakeSim co-investigator. “But when you get to a site the size of Lakeside, the interdependencies of the various components are less understood, and the consequences of decision-making are much more significant. We are focused on developing more efficient and effective ways of making decisions informed by science.”

LakeSim will also allow planners and developers to explore a wider range of designs more quickly, without the lengthy periods of re-analysis currently required for each aspect of the development when a new strategy is proposed. An urban planner would make changes to their plan – for example, changing a residential block to commercial – triggering the execution of computational models that rapidly predict the effects of those adjustments across multiple complex systems, such as energy supply or storm water management.

Ed Woodbury, president of McCaffery Interests, said that the tool fits the real estate developer’s vision of Chicago Lakeside as a “living laboratory” for urban development.

“Lakeside is a great chance for Chicago to reset the paradigm for infrastructure and real estate development,” Woodbury said. “The scale of the site gives us almost limitless variables and limitless opportunities to see the effect of different strategies for implementing the development as we move forward. LakeSim will allow us to quickly model different development scenarios and intelligently implement the next generation infrastructure we have envisioned.”

Beyond Chicago Lakeside, the researchers hope that the LakeSim framework will be useful for other large-scale developments elsewhere in the United States and around the globe. In rapidly urbanizing countries such as China and India, where hundreds of millions of people are expected to move into cities over the next decade, such tools will be essential to design urban areas that are livable, efficient and environmentally sustainable.

“With the Lakeside site, we’re thrilled to be applying our scientific and technical capabilities on a project that will impact Chicago and the greater region,” Guzowski said. “On a broader level, better and deeper knowledge of how cities are planned and operated will have tremendous economic and environmental implications given the rise of global urbanism and the pace at which it is occurring.”

The Computation Institute (CI), a joint initiative of the University of Chicago and Argonne National Laboratory, is an intellectual nexus for scientists and scholars pursuing multi-disciplinary research and a resource center for developing and applying innovative computational approaches. Founded in 1999, it is home to over 100 faculty, fellows, and staff researching complex, system-level problems in such areas as biomedicine, energy and climate, astronomy and astrophysics, computational economics, and molecular engineering. CI is home to diverse projects including the Center for Robust Decision Making on Climate and Energy Policy, the Center for Multiscale Theory and Simulation, The Urban Center for Computation and Data and Globus Online.

Chicago Lakeside Development is a joint venture between U.S. Steel Corporation and McCaffery Interests, Inc. Chicago Lakeside Development is a global initiative for innovative living, with a strong focus on sustainable land development and community involvement. The development itself is a master-planned, nearly 600-acre mixed-use community located on the former U.S. Steel South Works site on the southeast lakefront in Chicago. The master plan is designed by Skidmore, Owings and Merrill in conjunction with Sasaki Associates and Antunovich Associates. Working closely with Mayor Rahm Emmanuel, Chicago Lakeside will be one of the largest public-private partnerships in the history of the city upon completion. With both public and private support, Chicago Lakeside is poised to revolutionize urban living in the 21st century. For more information, please visit www.chicagolakesidedevelopment.com or follow the project on Facebook.

Argonne National Laboratory seeks solutions to pressing national problems in science and technology. The nation’s first national laboratory, Argonne conducts leading-edge basic and applied scientific research in virtually every scientific discipline. Argonne researchers work closely with researchers from hundreds of companies, universities, and federal, state and municipal agencies to help them solve their specific problems, advance America’s scientific leadership and prepare the nation for a better future. With employees from more than 60 nations, Argonne is managed by UChicago Argonne, LLC for the U.S. Department of Energy’s Office of Science.