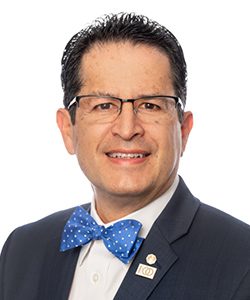 Washington, DC—Alfred Vidaurri Jr., FAIA, NCARB, AICP, of Fort Worth, Texas, was elected first vice president/president-elect of the National Council of Architectural Registration Boards (NCARB) at the organization’s 2020 Annual Business Meeting. By virtue of his election, Vidaurri will become the first Latino president of the organization, which facilitates licensure and credentialing for architects in the United States, in June 2021.

Over the next two years, Vidaurri plans to focus on furthering NCARB’s equity, diversity, and inclusion (EDI) efforts—from identifying and addressing barriers along the path to licensure, to ensuring the organization’s staff and volunteers reflect the diverse communities they serve.

From 2004-2015, Vidaurri was a member of the Texas Board of Architectural Examiners, serving multiple terms as chair and vice chair. He also served in various other regional leadership positions, including chair, vice chair, treasurer, and secretary before being elected by his peers as the director of Region 3.

Since then, Vidaurri has gone on to serve as treasurer, secretary, and second vice president of NCARB. He has dedicated his time and expertise to several NCARB committees and initiatives, including the Ethics and Diversity Collaborative task forces and the Futures Collaborative, as well the Credentials, Examination, Procedures and Documents, and Regional Leadership committees. He also chaired the Audit, Broadly Experienced Architect, and Education committees.

Committed to advancing architectural education, Vidaurri represented NCARB on several National Architectural Accrediting Board (NAAB) visiting teams, which evaluate college architecture programs, and at the 2013 and 2020 NAAB Accreditation Review Forums. Additionally, Vidaurri oversaw the creation of a pilot program for the Tri-National Agreement, which facilitates reciprocal licensure among the United States, Canada, and Mexico.

Vidaurri is a vice president of Freese and Nichols Inc., which was the first architecture and engineering firm to receive the Malcolm Baldrige National Quality Award. He is also a member of the American Institute of Architects (AIA), American Institute of Certified Planners (AICP), U.S. Green Building Council, Texas Society of Architects, and AIA Fort Worth. Vidaurri was elevated to the AIA College of Fellows in 2015, and was awarded the NCARB President’s Medal for Distinguished Service in 2014.

A graduate of the University of Texas at Arlington’s Master of Architecture program, Vidaurri has held numerous positions with various local, community, and state organizations. He holds an NCARB Certificate and is licensed in Texas, Arkansas, Florida, Georgia, North Carolina, and Oklahoma.

The National Council of Architectural Registration Boards’ membership is made up of the architectural licensing boards of the 50 states, the District of Columbia, Guam, the Northern Mariana Islands, Puerto Rico, and the U.S. Virgin Islands. NCARB, in collaboration with these boards, facilitates the licensure and credentialing of architects to protect the health, safety, and welfare of the public.

To achieve these goals, NCARB works with its Member Boards and volunteers to develop and facilitate standards for licensure, including the national examination and experience program. NCARB also recommends regulatory guidelines for licensing boards and helps architects expand their professional reach through the NCARB Certificate.