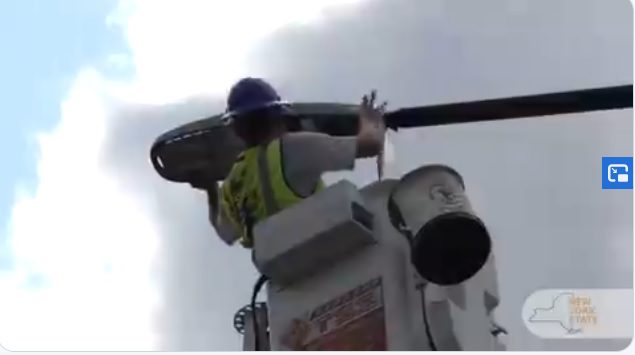 NYPA Partners with Utica to Install more than 7,100 LED Streetlights

View Video on the Installation of the Utica Street Lights

WHITE PLAINS—The New York Power Authority is partnering with the City of Utica to install energy-efficient LED streetlights throughout the City of Utica as part of Governor Andrew M. Cuomo’s Smart Street Lighting NY program. The energy efficiency project will save the city more than $1.5 million annually and reduce greenhouse gas emissions by approximately 2,280 tons a year—the equivalent of taking more than 1,600 cars off the road. Smart Street Lighting NY is a statewide program that calls for at least 500,000 streetlights throughout the state to be replaced with LED technology by 2025. The program advances Governor Cuomo’s Green New Deal, a nation-leading clean energy and jobs agenda that will aggressively put New York State on a path to economy-wide carbon neutrality. The installation will begin this week and comply with all Covid-19 precautions outlined in the Governor’s NY Forward plan.

The $11.1 million upgrade, implemented by the Power Authority, includes the replacement of more than 7,100 streetlights throughout the city with energy-saving LED fixtures. NYPA is also providing Utica with $690,000 in funding support for the project.

“Modernizing Utica with SMART, energy-efficient street lighting fixtures is critical in moving New York into the future,” said Gil Quiniones, NYPA president and CEO. “This important project is evidence that New York is safely moving forward from the pandemic and a demonstration of the state’s steadfast commitment to fighting climate change and saving taxpayer money through innovative energy programs.”

“Upgrading Utica’s lighting infrastructure shows how far the city has progressed as this initiative will yield tremendous overall benefits for our community,” said Utica Mayor Robert Palmieri. “This long term investment and partnership with NYPA will save the city money, while also reducing greenhouse emissions and incorporating modern technology. I thank Governor Cuomo and NYPA personnel for their continued support of this project.”

The city will benefit from a new asset management system to monitor and control the entire streetlight system, providing localized dimming options and outage reporting. The new fixtures will also act as a power source, creating individual hubs for future SMART technology additions.

NYPA is working with cities, towns, villages and counties throughout New York to fully manage and implement a customer’s transition to LED streetlight technology. NYPA provides upfront financing for the project, with payments to NYPA made in the years following from the cost-savings created by the reduced energy use of the LED streetlights, which are 50 to 65 percent more efficient than alternative street lighting options.

Through this statewide street lighting program, NYPA’s government customers are provided a wide-array of lighting options to help meet their community’s individual needs, including specifications on the lights to incorporate SMART technology, which can be used for dozens of other functions, such as cameras and other safety features, weather sensors, Wi-Fi and energy meters.

To further advance the Governor’s effort to replace existing New York street lighting, NYPA announced earlier this year a new maintenance program to allow contractors to provide routine and on-call maintenance services for LED street lighting fixtures installed by NYPA throughout the state. The new service will be available to municipalities that have engaged NYPA to implement a LED street lighting conversion and have elected to install an asset management controls system on their street lighting system, reducing the number of failures and repairs needed after the installation is complete.

NYPA has installed—or is in the process of installing—nearly 50,000 LED streetlights at municipalities across the state. To learn more about the Smart Street Lighting NY program, visit the program webpage on NYPA’s website.

Governor Andrew M. Cuomo’s Green New Deal, the nation’s leading clean energy and jobs agenda, will aggressively put New York State on a path to economy-wide carbon neutrality This initiative will provide for a just transition to clean energy, spurring the growth of the green economy and mandating New York’s power be 100 percent clean and carbon-free by 2040, one of the most aggressive goals in the U.S. The cornerstone of this newly proposed mandate is a significant increase of New York’s successful Clean Energy Standard to 70 percent renewable electricity by 2030. As part of the unprecedented ramp-up of renewable energy, New York has already invested $3.8 billion into 67 large-scale renewable projects across the state as it significantly increases its clean energy targets, such as: quadrupling New York’s offshore wind target to a nation-leading 9,000 megawatts by 2035; doubling distributed solar deployment to 6,000 megawatts by 2025; and deploying 3,000 megawatts of energy storage by 2030. To support this ambitious work, NY Green Bank intends to use its expertise in overcoming financing gaps to foster greater environmental impacts per public dollar by raising over $1 billion in third party funds to expand climate financing availability across New York and the rest of North America.

NYPA is the largest state public power organization in the nation, operating 16 generating facilities and more than 1,400 circuit-miles of transmission lines. More than 80 percent of the electricity NYPA produces is clean renewable hydropower. NYPA uses no tax money or state credit. It finances its operations through the sale of bonds and revenues earned in large part through sales of electricity. For more information visit www.nypa.gov and follow us on Twitter @NYPAenergy, Facebook, Instagram, Tumblr and LinkedIn.