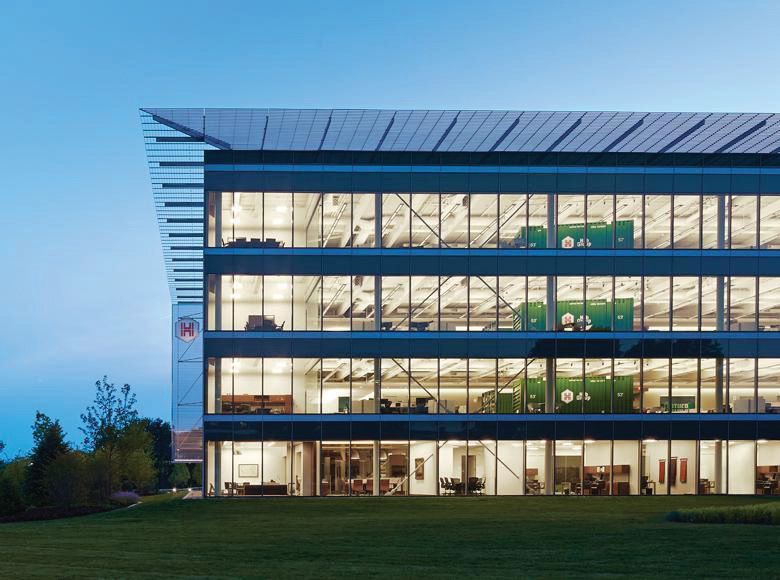 Angus Stocking on June 29, 2020 - in Articles, Feature, Featured
Hub Group is a publicly traded North American transportation-management company providing intermodal, truck brokerage and logistics services. With more than $3.5 billion in revenue, Hub is one of the largest such companies in the world. And in the teenage years of the 21st century, it has built not one but two outstanding—and nearly identical—headquarter buildings in Oak Brook, Ill., that befit their status and serve their mission while also being models of progressive, sustainable design and construction practice.

In 1971, per wikipedia, “Phillip and Joyce (Yeager) founded Hub Group (then known as Hub City Terminals) in Hinsdale, Ill. The company was started with $10,000 and was located in a windowless, one-room office above a flower shop.” By 1998, the firm operated out of 34 regional offices and had become the first intermodal marketing company to top $1 billion in yearly revenue.

In 2012, to accommodate continued rapid growth, Hub Group broke ground on the first headquarters building, a 130,000-square-foot LEED-Gold certified building on a 17-acre site that was completed in late 2013. It was the first new office building built in Oak Brook in more than a decade, and the architectural and sustainability features of the new building drew national attention.

“The new building exemplifies our commitment to sustainability,” Hub Chairman and CEO David P. Yeager said at the time. “With features including high-efficiency HVAC, energy-efficient lighting controls and stormwater harvesting, our goal is to achieve LEED Gold status.”

It also was effective as a headquarters. In 2013, the new building opened with about 500 employees, and added another 300 during the next six years. And Hub Group kept growing, too. In an interview, Hub Group President and COO Phil Yeager notes that the company’s continued growth caused it to outgrow its current footprint, just six years after moving in.

“In anticipation of future expansion and in alignment with our long-term growth strategy, we purchased additional land in 2016,” he said. “We’re investing in technology, equipment, acquisitions and our employees to better serve our customers and have the goal of growing from a $4 billion company today to a $6 billion company by 2023. Given this growth trajectory and our plans for the future, we anticipated the need for more space. In fact, our 29-acre campus is designed to house two additional buildings in the future.”

Simply put, the 2013 headquarters was such an efficient, beautiful and effective building that, in 2019, Hub Group decided to build another one just like it.

The Same, But Different

Hub Phase II, as the new headquarters is called, has been justifiably labeled a “replica” of Phase I, as it’s sited directly next door to the existing building, has an identical footprint and underground parking structures, has an identical facade and structure, and even houses nearly identical interior layouts. Although duplicated buildings are not unheard of—the Twin Towers being a notable example—they’re usually built simultaneously, not sequentially, and they’re not usually headquarter buildings.

“It’s certainly unusual to build the same building twice—in fact, in my career, I’ve never seen it done before,” says Joe Zosky, vice president of construction at Morgan/Harbour Construction (general contractor for Phase I and Phase II). “At least not in a building this sophisticated—maybe a warehouse or something like that.”

That said, there were certainly advantages, particularly in design, construction and approval gains that resulted in substantial schedule and budget improvements.

• Design really was as simple as “taking the 2012 plans, making some small changes and changing the date,” says Zosky. Put simply, reuse of the original plans and design phase vastly reduced the costs of design, making it very nearly a “two for the price of one” deal.

• The building approval process was greatly expedited by two factors. First, having pre-approved plans for immediate submittal shortcut months of work. And when considering approval of the new building, Oak Brook planners could simply refer to previous reports and submittals as well as the actual completion of a building they already liked.

• Construction costing was dramatically more precise. “The way it worked, I simply met with the architects, previous subcontractors and our own staff who’d worked on Phase I, and was able to provide very accurate cost estimates and scheduling,” adds Zosky. “How often do you get to build substantially the same building again? It really helped.”

Another advantage of duplicating the original headquarters was the opportunity to review the performance of the original building and make improvements to the new one; it’s as if Phase I served as an initial, constructed “draft” of a report or drawing, and Phase II was an edited revision. Put another way, Phase I was like a to-scale physical model of Phase II that provided the theoretically best possible opportunity for real-life clash detection.

a. Initially a column was designed to be located amidst the conference room but later removed (by design) to allow clear area.

i. The column removal appears to have resulted in some sagging of the floor above, which was leveled during the floor covering installation. 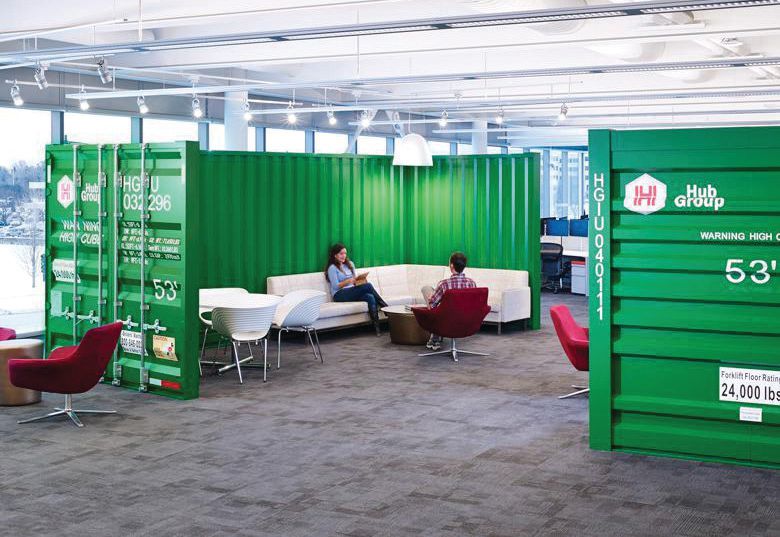 Many features of the original headquarters, such as sustainability measures and conference
and lobby spaces crafted from Hub Group’s iconic shipping containers, were so popular
they landed the building on “Chicago’s Coolest Office” list.

b. Review the size of the beams carrying the load resulting from deleting the column. 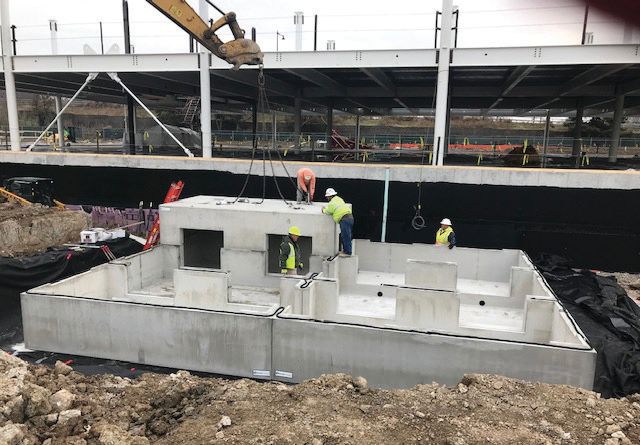 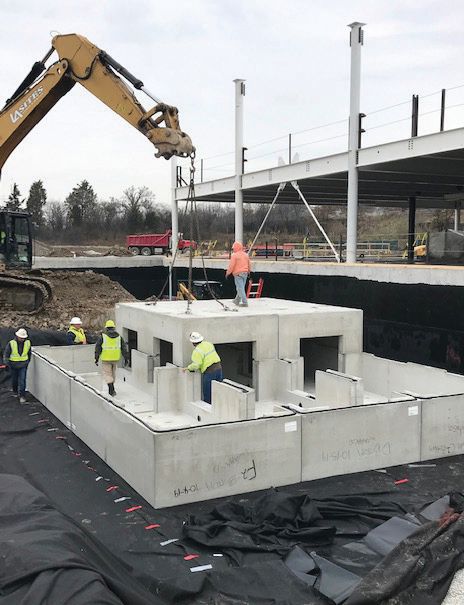 An important part of the headquarters’water sustainability, the StormCapture System from Oldcastle, is an easily installed, modular rainharvest solution that can be scaled up or down to suit any site.

HVAC openings through steel beams—need HVAC design immediately to allow for steel fabrication, delivery and installation to be timely.

a. Do a better job of elevator pit location.

b. Make elevator sump pit a precast concrete unit to avoid flotation of the unit.

d. Confirm that sump pump sizes are adequate (or better) to accommodate the volume and flow of groundwater that is generated.

a. Review design to reduce steep grade from top of ramp to garage floor.

b. Review waterproof coating area to ensure it covers the entire backside of the wall.

i. Currently groundwater is seeping through a wall section and staining the wall.

ii. Ensure that the waterproofing and drain tile system service the entire backside of the ramp walls.

c. Extend the heated slab area to include the generator and transformer slabs.

d. Ensure that the glycol pump that heats the slab is sized sufficient to readily service the task of melting snow to avoid ice forming on the slab surface.

e. Ensure that the set point temperature for the glycol is as low as possible to heat the slab through severe cold (current setpoint is at -10 degrees).

f. Ramp walls quality of finish must be discussed and agreed upon prior to concrete contractor accepting the project and scheduling form material.

a. The closers for these doors are located on the exterior in-ground—fails regularly to properly close/seal the door to the jamb.

b. Consider a design that has a slim line or closer that is made for exterior door use.

c. The design should also be reviewed to seal; weather out when the outside doors are still open while the interior vestibule doors are being used for entry—as well as vice versa.

d. Ensure that the door system is properly thermally broken.

Imagine going into the final design and construction phases of a 130,000-square-foot building with this much verified, as-built, “feedback in advance” on how a completed example actually worked—it was like having a time machine available!

Phase I and II’s sustainability measures are impressive and, interestingly, driven not by local zoning or regulations, but by Hub Group’s own considerable commitment to green initiatives. In a statement on the headquarter buildings, the firm said:

“Hub Group’s sustainability commitment continues through our new LEED Gold certified corporate headquarters in Oak Brook, Ill., where we repurposed materials from the demolition of the previous building to protect and restore the nearby habitat as well as minimize our impact on the environment. Other eco-friendly features incorporated include special parking spaces for electric, fuel-efficient and fuel-conscious vehicles, spaces for bicycles and easy access to public transportation. We built water-efficient landscaping and repurposed rainwater for reduced water use. The building features full floor-to-ceiling windows that lessen our dependency on artificial light, sunlight-sensitive blinds that automatically adjust to regulate natural light, and motion-sensory lights in conference rooms and offices to ensure lights are only on when rooms are in use. We specifically chose low-emitting materials to lessen our chemical impact, including adhesives and sealants, paints and coatings, and flooring systems.”

The “repurposed rainwater” system is the first Illinois installation of Oldcastle Infrastructure’s StormCapture System, a modular, easy-to-install system that scales up as needed to suit very large sites and offers numerous options for infiltration, detention, retention, treatment and harvesting of rainwater. Combined with an automated, sensor-driven system for irrigation and sprinkling, the 27-acre Hub Group campus is about as zero-impact, in terms of water use, as large-scale commercial infrastructure can be.

Likewise, the 100-percent glass exterior cladding of the headquarter buildings is good for natural lighting, but, as with all glass-clad buildings, there’s the potential for uncomfortable heat loading, especially during Midwest summers. To counter this, sensors on the roof are programmed to send “sunlight tracking” to a controller that raises and lowers the relevant shades to exactly the same height.

Hub Group’s success in attaining a high level of measurable sustainability is attested to by the awarding of its LEED Gold rating, the second-highest rating available, after platinum.

An additional measure taken to enhance sustainability (or perhaps simply comfort) is a 900-foot-long tunnel being built to connect the two headquarters buildings—given the temperature extremes in Illinois, a comfortable connection between the two groups of key employees is extremely advantageous.

“Hub first considered a connecting bridge,” explains Zosky. “But ultimately, the underground connection was not only more cost-effective, it also had the potential to be wider and a more useful and sophisticated space.”

When completed, the connecting tunnel will be more like an underground airport concourse, with natural lighting throughout, continuously poured concrete walls and sump pump system to ensure dryness, and interior design to match the rest of the interiors.

Several factors had to come together serendipitously for these “Twin Blocks” to make sense conceptually and to be realized:

• Economic conditions supporting that growth and the real estate investment

• A suitable nextdoor lot that became unexpectedly available (a story in itself).

• And perhaps most importantly, a corporate culture that asked, “Why not?” when the idea came up.

Perhaps it was a risk, but it also was an investment in innovation that paid handsome returns in cost-effectiveness, utility and enhanced corporate culture.