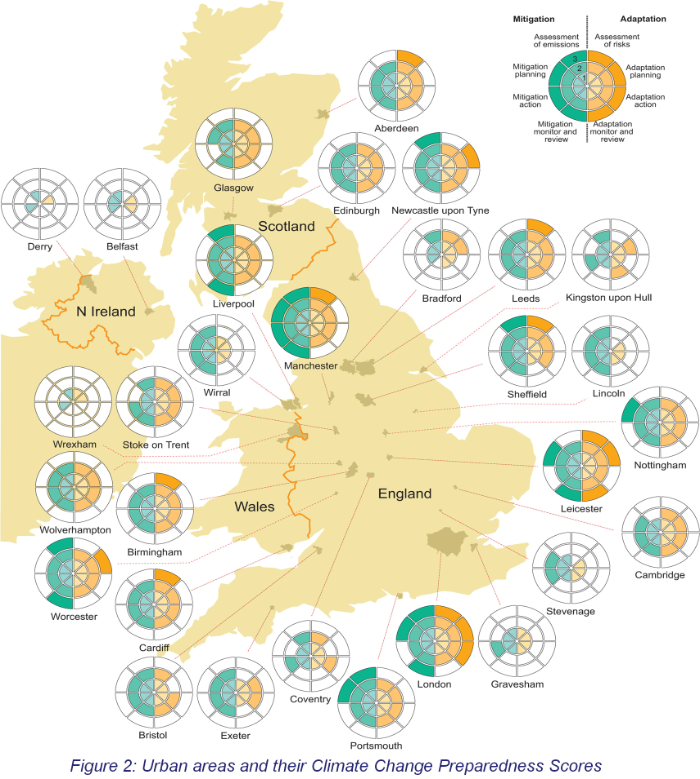 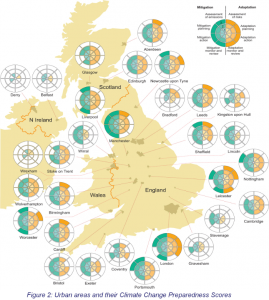 The ability of cities to combat the cause of climate change and to adapt to future weather patterns depends on where we live in the UK, new research suggests. Scientists at Newcastle University have revealed a “postcode lottery of preparedness” across the country based on what each city is doing to not only reduce greenhouse emissions but also adapt to future climate change and extremes of weather such as flooding and drought.

Publishing their results today in the academic journal Climatic Change, they reveal huge variation across the UK with London and Leicester gaining the highest scores both for adaptation and mitigation and Wrexham and Derry the lowest.

Newcastle University’s Dr Oliver Heidrich who led the research said it highlighted at a glance the “state of readiness” across the country and how prepared we are for the future.

“Of the 30 cities we assessed, all of them acknowledged that climate change was a threat and all except two had a strategy or policy in place to reduce emissions and also adapt to cope better with future weather patterns, in particular flooding,” explains Dr Heidrich, a senior researcher in the School of Civil Engineering and Geosciences.

“But a plan is only any good if you implement it and then assess it to see how effective it has been, this requires a long term investment in the strategies.

“We found that in many cities this wasn’t happening.  In some cases, plans were in place but nothing had been done about them.  Many cities published plans and partially implemented associated schemes such as introducing electric vehicles or solar panels as well as making changes to the built environment to reduce the risk of flooding. But very often, no-one was monitoring to see whether it made a difference or had actually made things worse.

“The aim of this research is not to name and shame cities, but if we are to be prepared for the increased occurrences of floods and droughts then we do need to make sure that our climate change policies are in place, that they are working and that the consequences of implementing these strategies are being checked.”

The 30 cities chosen for the study were those selected as part of the European Urban Audit database and are representative of urban areas across the UK.

The Newcastle team then applied the scoring methodology to assess the level of preparedness of each of the cities to climate change, rating from 0-3 against both adaption and mitigation.

London was found to have one of the most advanced strategies in place, mitigating the impact on climate change through, for example, energy efficiency and saving, increasing the use of renewables, waste management and the introduction of greener modes of transport.  Leicester also scored highly, carrying out rigorous monitoring and providing regular reports on the city’s carbon footprints.

Other cities, such as Newcastle, had advanced electric vehicle infrastructures in place while Sheffield and Coventry have established programmes to produce more energy from waste and reduce landfill.

Almost all cities had set targets for reducing CO2 emissions although quite a few would not commit to an actual target, figure or timescale, rendering them meaningless; reduction targets varied from just 10% to 80%.  Edinburgh was one of those with a deadline, setting a target of reducing carbon emissions by 40% by 2020 and to achieve a zero carbon economy by 2050.

In most cities, adaptation policies lagged behind the mitigation plans.  With flooding a key threat in many urban areas – both now and in the future – the team showed that many cities were still unprepared to cope with extremes of weather patterns.  Although many had flood protection schemes in place, few had assessed whether they were actually effective.

Dr Heidrich adds: “What this research highlights more than anything is the huge variations in the state of readiness for climate change across the UK, and the method of assessing the preparedness of cities can easily be applied to cities in other countries.

“Although cities of all sizes across the UK acknowledge climate change is a threat, there is considerable spread of measures in place and huge inconsistency in policy between areas and against national and international targets.

“Local Authorities are pivotal to the implementation of global climate policy so it is essential that we embed adaptation and mitigation strategies within the urban planning framework.”

Comments are disabled
NEXT ARTICLE
Guangzhou Government Saves with Car-Tracking Scheme
August 13, 2013
PREVIOUS ARTICLE
Is a Hyperloop in Your City's Future?
August 12, 2013