/ Articles / The Flooding Strikes Back: Mother Nature Rises Again Shortly After Technology Seemed to Have the Upper Hand

The Flooding Strikes Back: Mother Nature Rises Again Shortly After Technology Seemed to Have the Upper Hand 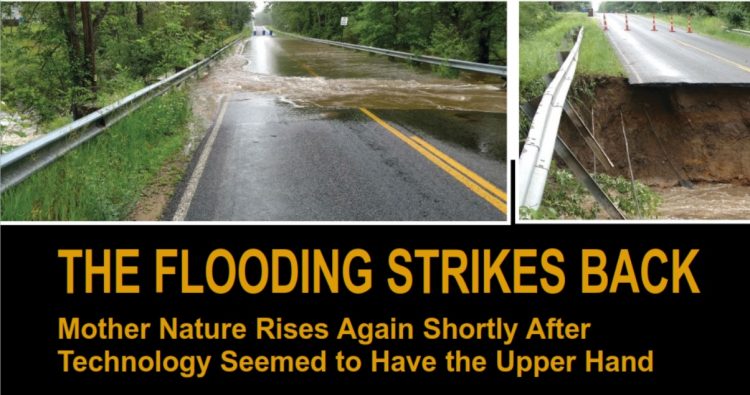 In mid-May 2020, several days of heavy rain fell on central Michigan, causing the Tittabawassee River to swell to 35 feet, more than a foot past its previous record and 10 feet above flood stage. Even worse, catastrophic dam failures further upriver forced the evacuation of approximately 10,000 people as the severe flooding overtook several populated areas in Midland County and threatened a Superfund site.

The state of Michigan is investigating the catastrophe, including dam operators Boyce Hydro, for possible negligence. Civil lawsuits also have been filed against the operators.

The 2020 flooding was a shock for local residents, as they were just recovering from another “500-year storm” only three years earlier. In the previous situation, the Midland County Road Commission (MCRC) was able to use a variety of new technologies and local partnerships to evaluate the flood damage as well as clear and repair its transportation routes. It seems they’ll have to re-use the lessons they just learned much, much sooner than expected.

The rain hit on an early summer Friday in June 2017. A freakish storm—declared a once-in-500-year rain event—dropped more than 7 inches of water on central Michigan in just 36 hours. The storm was concentrated over a relatively small area. Midland County, home to roughly 83,000 people, was hit especially hard.

Near the city of Midland, the Tittabawassee River quickly rose to flood stage and beyond. Only a day after the rains started, the river crested at 32.15 feet, more than 8 feet above flood stage and the second-highest level in more than 30 years. In less than two days, the river flow jumped from 3,200 cubic feet per second (cfs) to more than 39,000 cfs. The flooding inundated homes, businesses and infrastructure, inflicting millions of dollars in damage.

The county’s roads were hit especially hard. By Saturday morning, the MCRC had closed roads in more than 120 locations throughout the county. The reasons for closures emphasized safety and ranged from standing water to washouts, damaged pavement, and loss of culverts and drainage structures. The MCRC needed to act quickly to assess the damage and get repairs underway. The effort included identifying areas requiring immediate attention and developing plans for temporary or permanent repairs. The amount of urgent work was overwhelming.

“On Monday morning, we took stock, prioritized the damage and determined which roads we could open with minor repairs,” says MCRC Managing Director Terry Palmer. “There were over a dozen water crossings that would require more major repairs—which is when OHM Advisors called and offered to assist. They had a team ready to assess our crossings and start the process of obtaining topographic data for the major failures.” 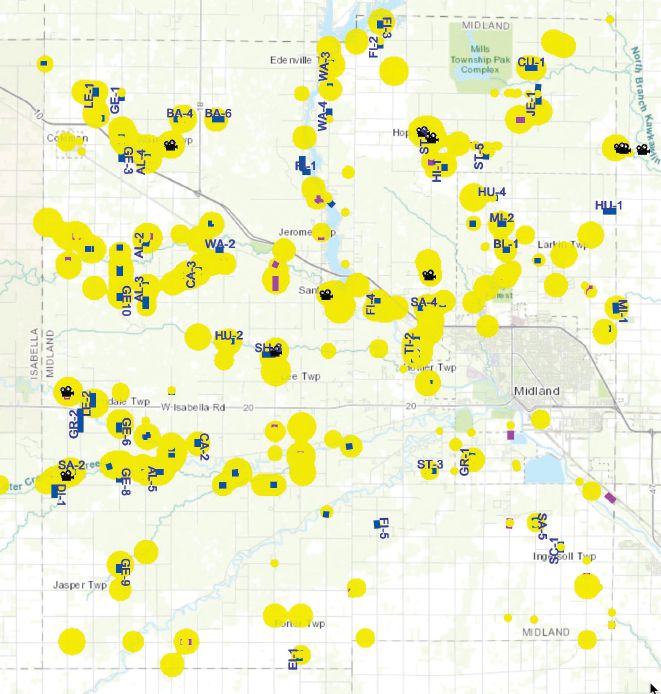 A Michigan-based firm providing architecture, engineering and planning for clients in the public and private sectors, OHM Advisors employs more than 500 people in 16 offices across three states. Craig Schripsema, manager of OHM Advisors’ office in Midland, deployed the firm’s survey teams to the affected area.

“We work alongside Midland County on many projects,” notes OHM Advisors Survey Practice Leader Ray Lillibridge. “We don’t offer typical solutions; we bring forth the best solution customized for the county and not what’s most profitable for us. That approach to innovation really helped strengthen our partnership.”

By Monday, the county emergency services were in the field identifying washed-out bridges and culverts. The locations were marked on a paper map at the MCRC office. Lillibridge quickly added the locations to a GIS application so the information could be readily shared among OHM Advisors’ teams.

“Once we started plotting known washouts, we were logistically able to create a plan of attack,” he adds. “We knew a couple of sites had no access, in which case we had to wait for the county to bring in temporary solutions.”

On Tuesday morning, two OHM Advisors field crews began surveying the damaged areas. They needed to gather data that would enable their engineers to evaluate the damage and develop plans to repair or rebuild the sites. In addition to often-circuitous routes to the sites, the two-person field crews faced soggy conditions and unstable, potentially dangerous slopes near the edges of the washouts. Lillibridge determined that the best and safest approach to quickly producing accurate information would be a blend of field technologies, including unmanned aerial systems (UASs), GNSS and total stations.

At each site, OHM Advisors surveyors conducted a quick walkaround before setting ground control points (GCPs) for the aerial imagery, marking the points with chevron targets. The crews set a minimum of four GCPs at each site, placing two on each side of the washout. One point was set as close as safely possible to the washout, and the second on the road up to 400 feet away.

“We can connect our R10 receivers to the MDOT network anywhere we have cellular coverage,” adds Lillibridge. “That way we can be confident everything we collect can be used in the future.” 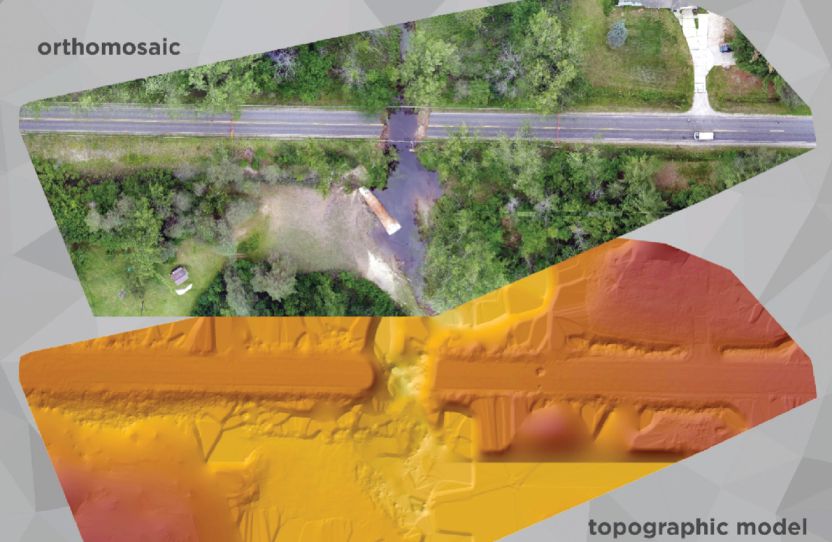 An orthomosaic image was combined with a 3D model of damage on Shaffer Road. Permanent repairs were completed in less than three months.

At each site, the crews used GNSS to collect a handful of checkpoints needed to verify the accuracy of the aerial data. With control in place, OHM employed a DJI Phantom 4 Pro to capture aerial imagery. Where vegetation prevented aerial work, they used a Trimble S7 total station to capture details of the washout. On average, the crews spent roughly one hour surveying at each site and completed 12 sites in two days.

“Those were long days,” recalls Lillibridge. “Once we were actually on a location, things went quickly. It was the logistics of getting between the sites that presented a problem. At some places, we had to go miles out of our way to get back into the other side of the sites.”

During the next week and a half, the county identified an additional six sites that had been compromised. OHM Advisors crews surveyed them as well.

At the end of each day, Lillibridge downloaded each site’s photos (roughly 60 images) to Esri Drone2Map for ArcGIS software. The GNSS data for control and checkpoints was exported in CSV format directly to the Esri software, which produced a georeferenced point cloud. Lillibridge then transferred the point cloud to Trimble Business Center (TBC) software.

“We’re familiar with TBC for point-cloud manipulation, so we were able to clean up the clouds and pull contours,” he notes. “Then we exported all of that to Civil3D. Our workflow is such that no matter where the data was coming from, our CAD technicians would see the same thing and have the same thing to manipulate, whether it was from the drone software or TBC as GNSS points or total station points. Once it gets to the CAD techs, it looks identical.”

Because TBC supports all common industry data standards, transfers were accomplished via simple “drag and drop” of project files. Lillibridge also used TBC to check the accuracy of the aerial work.

“For this project, our tolerance was 0.15 feet vertical,” he says. “But I cannot recall any being over a tenth in vertical difference. These projects hit their checkpoints with minimal error.”

OHM Advisors used Trimble Business Center to manage and exchange data with GIS and CAD software to create a 3D model of a road washout.

Preparation of deliverables moved quickly. OHM Advisors’ inhouse engineering teams reviewed the field data and developed plans for rebuilding or replacing damaged structures. The firm had previously worked with the county to develop a design for a Geosynthetic Reinforced Soil-Integrated Bridge System (GRS-IBS), which provides flexible designs with low maintenance. They provided sizes for the replacement bridges, and the county’s contractors could then mold the road to fit the structure. As a result, aside from re-verifying the control, OHM Advisors didn’t need to provide any construction surveying.

A road epair plan was developed from aerial image data.

As construction wrapped up, OHM Advisors used the opportunity to incorporate the Microsoft HoloLens 3D mixed-reality headset. To do this, they exported design models from TBC to Trimble SketchUp software. Next, they used Trimble Connect to load the design data polylines into HoloLens along with a decimated version of the original washout surface model. In the field, they used Trimble Connect to orient to the site. They could then visually compare the finished conditions with the original surfaces.

“It was really interesting on the HoloLens to see the base surface from when the washout occurred,” adds Lillibridge. “The original data looked like a cliff in the new road where the washout had been.”

OHM Advisors also used HoloLens, SketchUp and Trimble Connect on other projects, primarily for pre-construction design and conception. For example, they recently did a project for a community firefighter memorial. The client wanted to see how planned flagpoles impacted the park site and how the monument sizes would fit the park. OHM Advisors experts visited the site with local officials, each using the HoloLens to visualize the finished project. The design work was done using Autodesk products and loaded into Trimble Connect for the field visualization.

In reviewing lessons learned from the Midland County flooding, Lillibridge said the effort confirmed what OHM Advisors has been doing. The approach of using UAS to supplement traditional survey methods proved to be stable and efficient.

MCRC’s Palmer emphasized the speed of the work. As the floodwaters receded, the commission set a goal to rebuild and reopen four key sites by the end of October 2019. Palmer said they completed the structure replacements with new GRS-IBSs designed by OHM Advisors.

“With minimal direction, they prioritized the areas to obtain data, collected data on multiple sites in one day and began delivering topographic data to the engineering design team in less than 72 hours,” notes Palmer. “We then authorized data collection at additional sites, and that information was delivered within three days. This allowed the engineering team to accurately assess the cost to restore nine road crossings, making our applications for emergency funds faster and more accurate.”

“Using a mix of technologies and methods is really beneficial in emergency situations,” notes Lillibridge.
“A lot of people think traditional surveying is sufficient. But from a safety perspective, that’s not the best way. You can keep your personnel out of harm’s way, and because of the built-in efficiencies, you’re able to provide solutions much faster than with traditional methods.”

John Stenmark is a writer and consultant working in the geospatial, AEC and associated industries; email: john@stenmark.us.